US Marine vs Japanese Infantryman: Guadalcanal 1942-1943 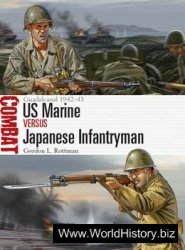 The brutal fighting between US Marines and Japanese infantry on the island of Guadalcanal in many ways came to typify the island-hopping war in the Pacific. This book not only explores the differing tactics and equipment used by the two combatants but also shows how the challenges of fighting in inhospitable tropical jungles impacted on soldiers on the ground, as combatants had to deal not only with their determined opponents but also the twin issues of disease and stretched supply lines. Written by a former special forces veteran with extensive knowledge of jungle warfare, this fully illustrated book lifts the veil on one of the most pivotal and ferocious close combat duels of World War II.