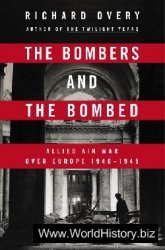 Author: Richard Overy
The Bombers and the Bombed. Allied Air War Over Europe, 1940-1945
VIKING
2013
Format:epub
Size: 17.3Mb
Language:English
Between 1939 and 1945 hundreds of European cities and hundreds more small townships and villages were subjected to aerial bombing. During the course of the conflict a staggering estimate of around 600,000 European civilians were killed by bomb attack and well over a million more were seriously injured.