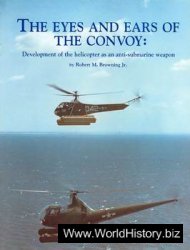 Author: Collective
The Eyes And Ears Of The Convoy - The Development of the Helicopter as an Anti-Submarine Weapon
Coast Guard Historian's Office
1993
Format: PDF
Pages: 20
Language: English
Size: 29 MB

The development of the helicopter can be attributed to a few visionary men who foresaw the great potential of this aircraft. During the World War II, due to the insistence of the several Coast Guard officers, this revolutionary aircraft was developed for war and peacetime uses. Their efforts helped the helicopter to evolve into the machine that is known today.