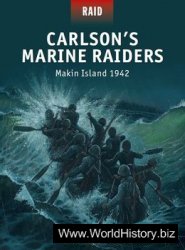 On August 17–18, 1942, 211 men of the US Marine Corps’ 2nd Raider Battalion conducted a daring amphibious raid on the Japanese-occupied Makin Island in the South Pacific. This ambitious but flawed operation was intended to divert Japanese reinforcements bound for Guadalcanal, over 1,000 miles to the southwest, in the wake of the US landings there ten days earlier.