The Routledge Atlas of the Second World War 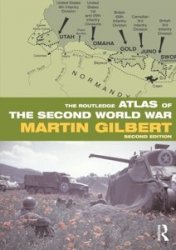 Author: Martin Gilbert
The Routledge Atlas of the Second World War (2 edition)
Routledge;
2009
ISBN: 0415552893
Format: EPUB
Size: 68,9 МБ
Language: English
Pages: 328
In The Routledge Atlas of the Second World War, Martin Gilbert graphically charts the war’s political, military, economic and social history through 247 maps. Each map has been specially drawn for this atlas, many of them covering topics that have not previously been mapped. The atlas covers all the major events from the German invasion of Poland in September 1939 to the defeat of Japan in August 1945, including the Blitz, the Fall of France, Pearl Harbor, the naval Battles of the Atlantic, the Indian Ocean and the Pacific, Dieppe, Stalingrad, Midway, the Normandy Landings, the bombing of Warsaw, London, Coventry, Hamburg, Dresden, Tokyo, Hiroshima and Nagasaki, the Burma Railway, concentration camps and slave labour camps, and prisoner-of-war camps in Europe, the Americas and the Far East.
Focusing on the human - and inhuman - aspects of the war, The Routledge Atlas of the Second World War includes examination of:
Military, naval and air campaigns on all the war fronts
The war on land, at sea and in the air
The economic and social aspects of the war
The global nature of the war, in armed combat and in suffering
The impact of the war on civilians, both under occupation, and as deportees and refugees
The aftermath of the war: the post-war political and national boundaries; war graves, and the human cost of the war on every continent.