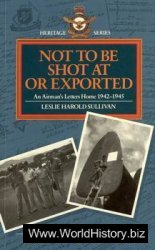 World War II thrust Australia into a deep crisis, presenting her people with extraordinary challenges. Men, women and children found themselves in roles they could hardly have imagined a few years before. Thousands went to war while thousands of other servicemen and women held their positions in posts throughout Australia, never reaching the battle lines. They called themselves the “koalas”. Like the furry Australian animal, they were “not to be shot at or exported”. One of these “koalas”, Leading Aircraftman Les Sullivan, through his personal letters home and diary entries of this time, tells their fascinating story.