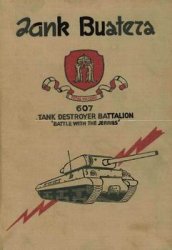 The 607th Tank Destroyer Battalion was a tank destroyer battalion of the United States Army active during the Second World War. They arrived in England during April, 1944, and entered combat in mid June, landing at Utah Beach. The unit fought across France and into Germany during the summer and early winter of 1944. In late winter, they were then pulled out and sent to Belgium near the end of the Ardennes Campaign and again fought their way into and across Germany, ending the war near the Czechoslovakian border. The 607th received credit for the Normandy, Northern France, Rhineland, Ardennes-Alsace and Central Europe campaigns.