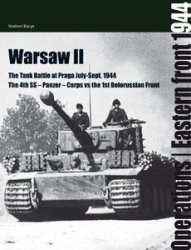 Author: Norbert Bacyk
Warzaw II: The Tank Battle at Praga
Leandoer & Ekholm Publishers
2012
ISBN: 9197589543
Format: EPUB
Size: 13,8 МБ
Language: English
Pages: 597
It is a common misunderstanding that the Red Army, on Stalin's order, halted outside Warsaw in August 1944 to let the German troops suppress the Polish uprising in the capital. Joseph Stalin of course didn't want to let a pro-British Polish government get a foothold in Warsaw.
The fact is that on the last day of July (the night before the start of the uprising) the Red Army was on its way into Praga (the east part of Warsaw on the east bank of Vistula) when the German troops mounted a violent counter attack. This started the bitter fight that came to be called "The Battle for Praga" and was to continue until the end of September when the Red Army finally conquered Praga. By then it was too late for the Polish resistance inside the city. The fighting was among the toughest and most brutal on the Eastern Front during the war.
Never before has this battle been described in the Swedish language and very seldom has it been mentioned in English literature. Furthermore we have managed to include unique pictures; photos that are vary rare and original colour illustrations by our internationally acknowledged illustrators; Maarten Swarts, Samuel Sward and Oliver Missing.