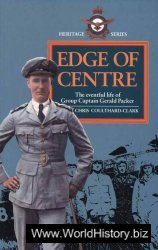 Though little known today, Gerald Packer was an influential figure in Australian public affairs for more than 30 years. An original thinker, Packer was prominent in Australia's intellectual circles both before and after the Second World War and contributed to an astonishingly diverse range of contemporary issues — including defense policy, international relations, economics, immigration, transport, business management and civil rights. Edge of Centre traces Packer s life from childhood to his death in 1962. entral to the story are his two periods of service in both the Australian Army and the Royal Australian Air Force. In the 1920s he was the RAAF s leading air photography expert, later becoming chief of intelligence and holding other senior posts at crucial points during the Second World War. His previously unacknowledged role in predicting Japan s entry into the war, the inquiry into the 1942 bombing of Darwin and the 1945 Morotai mutiny places Packer as a figure constantly operating at the edge of the centre. Drawing from extensive family records, Chris Coulthard-Clark has assembled a remarkable array of Packer s published and unpublished writings to provide an impressive testimony to the talents of an extraordinary individual.