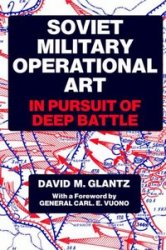 Author: David M. Glantz
Soviet Military Operational Art: In Pursuit of Deep Battle
Frank Cass
1991
ISBN: 0714633623
Format: PDF
Size: 15,0 МБ
Language: English
Pages: 295
David Glantz examines the Soviet study of war, the re-emergence of the operation level and its connection with deep battle, the evolution of the Soviet theory of operations in depth before 1941, and its refinement and application in the European theatre and the Far East between 1941 and 1945.