Hitler's Vikings: The History of the Scandinavian Waffen-SS: The Legions, the SS-Wiking and the SS-Nordland 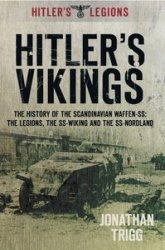 Author: Jonathan Trigg
Hitler's Vikings: The History of the Scandinavian Waffen-SS: The Legions, the SS-Wiking and the SS-Nordland
The History Press
2012
ISBN: 0752467298
Format: EPUB
Size: 8,3 МБ
Language: English
Pages: 288
The first book to cover all the Scandinavians who served in Hitler's feared Waffen-SS right until the end in Berlin
Based in part on interviews with surviving veterans, this history details the battles the Danish, Norwegian, Swedish, and Finnish men of the Waffen-SS fought, and what inspired them to join. The Nazis' dream of a world dominated by legions of Aryan "supermen," forged in battle and absolutely loyal to Adolf Hitler, was epitomized by the Waffen-SS.