American Intelligence And The German Resistance: A Documentary History 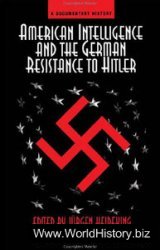 Author: Jurgen Heideking, Christoph Mauch
American Intelligence And The German Resistance: A Documentary History
Westview Press
1998
ISBN: 0813336368
Format: PDF
Size: 43,3 МБ
Language: English
Pages: 580
Even paranoids have enemies. Hitler’s most powerful foes were the Allied powers, but he also feared internal conspiracies bent on overthrowing his malevolent regime. In fact, there was a small but significant internal resistance to the Nazi regime, and it did receive help from the outside world. Through recently declassified intelligence documents, this book reveals for the first time the complete story of America’s wartime knowledge about, encouragement of, and secret collaboration with the German resistance to Hitler—including the famous July 20th plot to assassinate the Fuehrer.The U.S. government’s secret contacts with the anti-Nazi resistance were conducted by the OSS, the World War II predecessor to the CIA. Highly sensitive intelligence reports recently released by the CIA make it evident that the U.S. government had vast knowledge of what was going on inside the Third Reich. For example, a capitulation offer to the western Allies under consideration by Count von Moltke in 1943 was thoroughly discussed within the U.S. government.