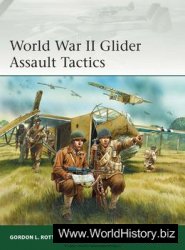 Military gliders came of age in World War II, when glider assault infantry were the forerunners of today’s helicopter-delivered airmobile troops. From the light pre-war sports and training machines, several nations developed troop-carrying gliders capable of getting a whole squad or more of infantry, with heavy weapons, onto the ground quickly, with the equipment that paratroopers simply could not carry. They made up at least one-third of the strength of US, British, and German airborne divisions in major battles, and they also carried out several daring coup de main raids and spearhead operations.