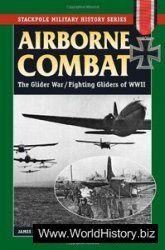 • Comprehensive look into the dangerous world of glider warfare
• Stories of elite glider troops in the thick of battle
• Covers all significant glider operations of the war, including Eben Emael, Crete, Sicily, Normandy, Arnhem, Bastogne during the Battle of the Bulge, the Eastern Front, and more
• Details on the glider craft of both sides
• Impressively illustrated with photos of gliders and their crews