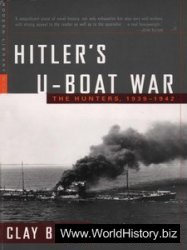 Author: Clay Blair
Hitler's U-Boat War: The Hunters, 1939-1942
Modern Library
2000
ISBN: 0679640320
Format: EPUB
Size: 5,9 МБ
Language: English
Pages: 864
Hitler's U-boat War is an epic sea story about the most arduous and prolonged naval battle in history. For a period of nearly six years, the German U-boat force attempted to blockade and isolate the British Isles in hopes of forcing the British out of the war, thereby thwarting both the Allied strategic air assault on German cities and Operation Overlord, the Allied invasion of Occupied France. Fortunately for the Allies, the U-boat force failed to achieve either of these objectives, but in the attempt they sank 2,800 Allied merchant ships, while the Allies sank nearly 800 U-boats. On both sides, tens of thousands of sailors perished.