Their Darkest Hour - People Tested to the Extreme in WWII 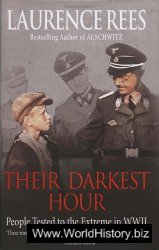 How could Nazi killers shoot Jewish women and children at close range? Why did Japanese soldiers rape and murder on such a horrendous scale? How was it possible to endure the torment of a Nazi concentration camp?
Award-winning documentary maker and historian Laurence Rees has spent nearly 20 years wrestling with these questions in the course of filming hundreds of interviews with people tested to the extreme during World War II. He has come face-to-face with rapists, mass murderers, even cannibals, but he has also met courageous individuals who are an inspiration to us all.
In Their Darkest Hour he presents 35 of his most electrifying encounters.