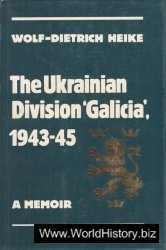 As the Division's Chief of Staff from January 1944 until its ultimate surrender in May 1945, the author was in an exceptionally favorable position to observe how a large group of Ukrainians reacted to the impending and politically complex crisis on the Eastern Front. The author describes the Division as it was formed in May 1943 and first saw action in July 1944 at Brody, where the major portion of its troops were killed or captured by Soviet forces. In October it was sent to Slovakia and was stationed there until January 1945. Then, by arduous marches under extremely difficult conditions, it was transferred to the mixed nationality area of southern Austria and northern Slovenia. At the war's end the Division retreated farther into Austria, to surrender to the British Army. Most combat was with regular Soviet troops advancing through Hungary toward southeast Austria.