A pseudo-historical Christian martyr, revered especially by crusaders, whose death is usually dated to 23 April 303. The conventional image of the soldier-saint overcoming a dragon probably has little or no connection with any historically authentic personality.

Eusebius, bishop of Caesarea in the mid-fourth century, wrote of the martyrdom in 303 of an unnamed man during the reign of the Roman emperor Diocletian (284-305); this man is usually identified as St. George. Said to be of high rank, he tore down the edict outlawing Christianity that had been fixed to the door of the cathedral of Nikomedeia (mod. izmit, Turkey), a town on the Asiatic shore of the Bosporus, and was then tortured and executed when he refused to renounce his beliefs. No original text of the passio (martyrdom) of St. George is known, but the account, which seems to be the earliest extant version of the legend (c. 350-500), also sets the story at Nikomedeia and identifies the saint as a Cappadocian. However, despite this emphasis on the northeastern Mediterranean, St. George’s cult soon came to be centered on the Palestinian towns of Jaffa (mod. Tel Aviv-Yafo, Israel) and Diospolis or Lydda (mod. Lod, Israel), places that both claimed to be the site of his martyrdom.

Lydda, in particular, proved important in the propagation of St. George’s cult among the crusaders. Emperor Constantine the Great (d. 337) is said to have built a basilica over the saint’s tomb there, and it is claimed that this church was subject to a series of razings and rebuilds during the period of the crusades. A cathedral is said to have been raised over the tomb between 1150 and 1170, only to be destroyed by Saladin in 1191. King Richard I (the Lionheart) of England is credited with rebuilding this cathedral, but there is little evidence to support this. It is also sometimes argued that returning crusaders were responsible for introducing St. George’s cult into western Europe, but there is clear evidence of a cult, albeit of limited importance, in early medieval France, Germany, Italy, and England: if anything, crusaders were reinforcing a veneration that was already established. St. George has been recognized as patron of a wide variety of countries and cities across both eastern and western Europe. Most significantly in this context, he was especially venerated in both Constantinople (mod. istanbul, Turkey) and Antioch (mod. Antakya, Turkey), and his most notable contribution to the crusades, his miraculous “appearances” at the sieges of Antioch (1098) and Jerusalem (1099) during the First Crusade, may well be related to preexisting seats of devotion.

Late sources claim that Richard the Lionheart had a personal vision of the saint at Acre (mod. ‘Akko, Israel) during the Third Crusade (1189-1192); this is in contrast to the more generalized appearances usually associated with the saint. For example, during the First Crusade, Godfrey of Bouillon was one of many who apparently saw a host of 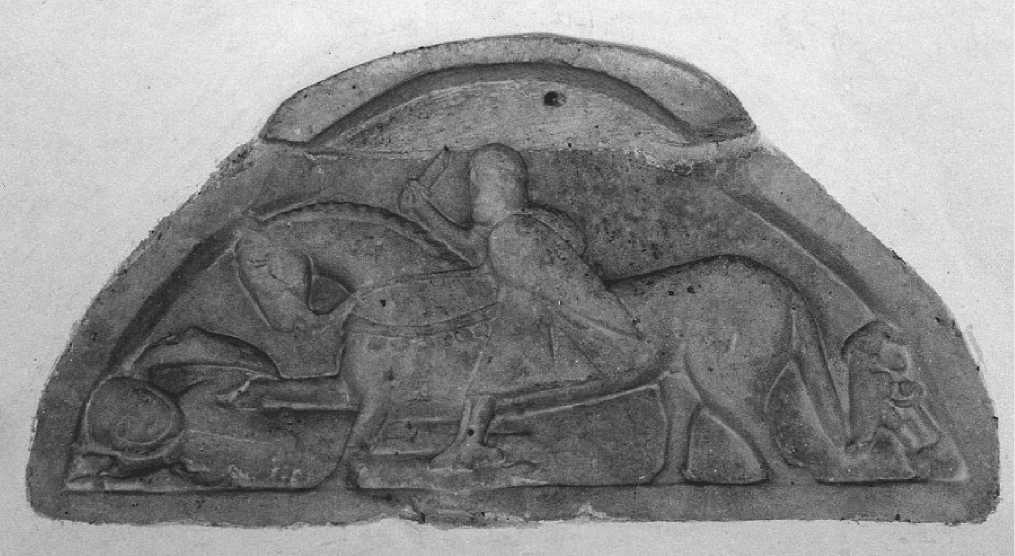 
Ghostly warriors riding white horses and bearing white banners coming to the aid of the besiegers at Antioch, a legend recounted in the Gesta Francorum. St. George was understood to be their captain, and this is consistent with the many stories of the appearances of soldier-saints such as SS. Theodore, Demetrios, Mercurios, and Maurice, often in a group with St. George. The first mention of a manifestation of St. George relates to a battle between the Normans and the Sicilian Muslims at Cerami in 1063, and this may well relate to the development of an identification of St. George as a soldier-saint, a variation on the original story, which was by no means general before the twelfth century.

Vernacular imagery of St. George in battle arose during the period of the crusades, for example, on sculpted tympana at Fordington (Dorset) and Damerham (Hampshire), both from around 1100, and in a wall painting at Hardham (Sussex) from 1120/1140. This iconography was in time superseded by the topos of the dragon fight, but they may well have coexisted for a period. The mid-thirteenth-century Legenda Aurea version of the legend of St. George recounts the appearance of the saint at the head of a heavenly troop at the siege of Jerusalem, but this text also includes the dragon story and was a principal progenitor of the concept of the saint as a dragon-slayer. This significant development consolidated the identification of the saint as a model of chivalry and authority, moving him still further away from his original construction as a tortured martyr. However, it is clear that St. George continued to be recognized in both roles throughout the late medieval period; even when his importance as a soldier fighting human enemies began to dwindle, the dragon-slayer was still understood as a suffering martyr. It is perhaps this fluidity of presentation that underlay his wide appeal and assured his continued popularity across both Roman Catholic and Greek Orthodox churches into the present day.

Laborderie, Olivier de, “Richard the Lionheart and the Birth of a National Cult of St George: Origins and Development of a Legend,” Nottingham Medieval Studies 39 (1995), 37-53.