Bodiam Castle in Sussex demonstrates Matthew Johnson’s point that social and symbolic messages sent out by the castle architecture became more meaningful than the military function (Figure 26). Johnson provides a close analysis of its design. Sir Edward Dallyngrigge (or Dallingridge; spellings were not fixed in those days) built this castle after retiring from almost thirty years of military service. As a younger son, he could not inherit the family estate, but during the Hundred Years War soldiers like Sir Edward could make a fortune from booty and ransom. When he settled down, Sir Edward married an heiress who also contributed her dowry to the building program. In October 1385 Sir Edward obtained a “license to crenellate,” and for the next three years he built his luxury castle. He claimed that he would protect the southern coast from pirates and the king’s enemies—but no pirates ever came.

The visual impression is all-important at Bodiam. The approach to the castle requires the visitor to cross the bridge over the main river, pass the mill pond, and arrive at the moat and bridge (now destroyed) leading to the postern gate on the south. Convenient as the postern was, it was a servants’ entrance, and no important person would use it. The visitors would continue around three sides of the moat, finally reaching a bridge leading to the main gate. 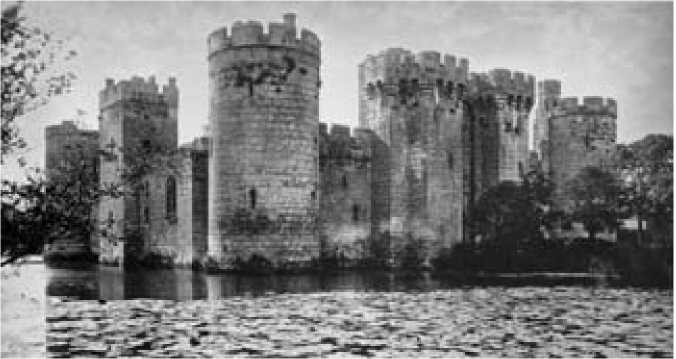 Figure 26. Bodiam Castle, England. Rising directly from the still water of a manmade lake, Bodiam is made more imposing by reflections that give the illusion of greater height to the walls. In this early photograph the abundant vegetation in the water reminds us of the use of the water defenses as part of the sanitary system of the castle. Gramstorff Collection, Photographic Archives, National Gallery of Art, Washington, DC.

Bodiam Castle has a symmetrical rectangular plan with crenellated cylindrical corner towers and a rectangular tower in the center of each side, one of which is a fortified gateway and one of which contains the postern gate. A slightly projecting chapel breaks the symmetry of the exterior. The principal domestic buildings lie directly across a square courtyard from the main gate. A passage leading to the postern also acts as a screens passage; as one enters, the hall is on the left and doors leading to the pantry, kitchen and buttery are on the right. The lord’s residence is reached from the upper end of the hall, and beyond that are the guests’ quarters and chapel. On the other side, beyond the kitchen, are quarters for servants. The military detachment was housed beside the entrance gate. The castle was beautiful, practical, and convenient. It includes thirty-three fireplaces and twenty-eight garderobes (which discharged directly into the moat, turning what is today a lily pond into an open sewer). Bodiam has been called “an old soldier’s dream castle.”

In Bodiam Castle’s design we see a perfect example of symbolic architecture. Bodiam could never have withstood a siege. Luckily it was

Never tested. The castle was built in a low-lying place, where a small stream feeds the moat. An attacking enemy had only to cut through the earth embankment to drain the moat. Why then was the wide moat constructed? Aesthetic considerations must have played a role. The moat is like a small lake, and the building seems to rise directly out of the water, Reflected in the water, the castle seems to double in size.

Not only could the moat be drained quickly and easily, the walls were too low and too thin (between six and seven feet) to withstand bombardment. Furthermore, large windows in the hall and the chapel also destroyed any military effectiveness the walls might have had. The battlements on the walls and towers are purely decorative, for the crenels are not high enough to shield the men standing behind them. Finally, the higher ground around the castle made anyone on the wall-walks vulnerable to crossbow bolts.

These military features do serve a symbolic purpose. Sir Edward Dal-lyngrigge built his dream castle at a time when pageantry, excessive attention to the forms of chivalry, and tales of King Arthur and the Knights of the Round Table entertained and inspired the aristocracy. Sir Edward had no ancient tower, no ancestral castle like Kenilworth; he had to build his castle from the start, just as he built his own career and fortune. He was an important man in his own locality (he owned the market and a mill), but he was not a landed aristocrat. Just what his own fantasy or intention was in building Bodiam we do not know, but we can imagine that Sir Edward enjoyed the symbolism associated with military architecture. Bodiam’s architectural forms are dictated not by function, but by an imaginary world. We have seen this contrast between reality and imagination in Rogier’s painting St. George and the Dragon with which we began our excursion into the world of the Middle Ages (see Figure 1).