These 3 figures and the next all come from the ‘Chronica de Gestis Hungarorum’ of Mark Kalti (these days more often referred to as the ‘Kepes Kronika’, or ‘Illustrated Chronicle’), a superbly illuminated ms. produced for King Louis I the Great of Hungary (1342-82), who in the course of his reign became in addition king of Poland (1370-82), Bosnia and parts of Serbia (1365-66) and Bulgaria (Vidin, 1365-70). It has been supposed for many years that the illustrations were executed in 1374-76, but more recent analysis favours the early 1360s, its author himself stating that he began writing it in 1358. The costumes worn here by 85 and 86, however, remained unchanged even in the first half of the 15th century.

Figure 85, from the picture of Louis and his court in the frontispiece of the ms., is fairly certainly a Jazyge or a Cuman or possibly a Szekler or a Ruthenian, or even a Tartar, all these ethnic minorities serving in Hungarian armies under their own chieftains throughout much of this period. He wears a long white kaftan with a blue pattern, blue lining, and gold and blue panels on the upper arm. The sleeves are quite long, and are occasionally shown even longer, hanging right over the hands as described under 80. In addition he wears red boots (the simple prick spurs are added from a 15th century source) and a light grey fur or sheepskin cap, such caps assuming a bewildering array of shapes in this ms., probably originally denoting differences between the individual ethnic groups and sub-groups. 85a-c show just a small selection of the many different types to be found in the original, most of which have wide brims, slit at the sides or front.

In the original he carries just a bow, the sabre and quiver shown here being added from other pictures. The 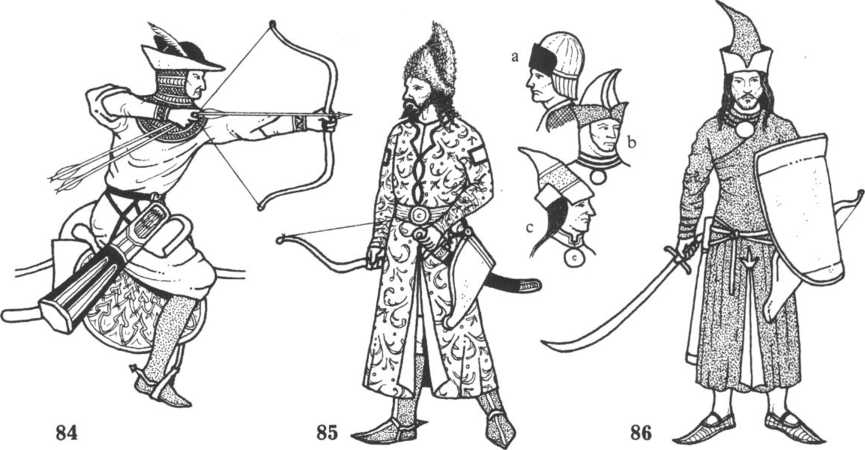 Sabre {sablya) was popular but, by this late date, far from universal amongst the Asiatic elements of the army. Close proximity to the Ottomans, however, whose raids into Hungary began in 1389, brought about something of a revival in its use, and it was via Hungary that the weapon was introduced into Poland and Russia on a widespread basis.

Whatever the true identity of 85, there is absolutely no doubt that figure 86 is a Cuman, since he is based on a portrait of King Ladislas ‘the Cuman’ (1272-90) in the ‘Kepes Krdnika’ that shows him in characteristic Cuman costume, which this and other pictures in the ms. clearly portray as a long topcoat reaching to midcalf (occasionally with a vent at each side), a knee-length shirt, and a tall, pointed cap with an upturned brim. In this particular case the coat is red with a white lining and darker red bands at collar and cuffs, plus gold embroidery at the top of the vent, and a gold brooch (also to be seen in figures 85b and c and most other such Asiatic figures in the ms.). The hat too is red, with a white upturned brim, while his stockings and shoes are blue-grey. The shield and sabre are added from another figure, some substituting a straight sword for the sabre. The shield is of interest in being a conventional Western European type rather than the small, circular buckler one might have expected; along with the sword it can doubtless be taken as evidence of the gradual westernisation of such troops. Nevertheless, on horseback such figures are invariably shown armed with composite bow and sabre, the shield presumably being slung at the back or hung from the saddle when the bow was in use. Circular shields were also still used.

Figure 87 is the odd man out in the ‘Kepes Krdnika’, being the only light cavalryman dressed in ordinary mid-14th century Western European fashion, which undoubtedly makes him a native Hungarian horse-archer rather than an Asiatic auxiliary. He is therefore fairly certainly one of the mounted archers that the 14th century banderia are known to have included and that in the 15th century became one of the standard troop-types called for by the militia portalis. He wears a pink tunic and white hood and rides with an Asiatic-style saddle, more suited to horse-archers than the high-pommelled Western European saddle. It was probably such bow-armed cavalry that Froissart intended by his reference to the Hungarians including ‘many crossbowmen on horseback’ during the Nicopolis campaign.