First compiled in the 500s, the Talmud brings together Jewish oral law as a complement or supplement to the written law, the Old Testament. It consists of two major parts, the Mishnah and the Gemara.

Later scholars produced commentaries on the Talmud. Rashi (Shlomo Yitz-haqi; 1040-1105), a rabbi in France, added insights drawn from the Jewish experience in Christian Europe during the Middle Ages. Even more important were the Talmudic commentaries of Moses Mai-monides a century later. 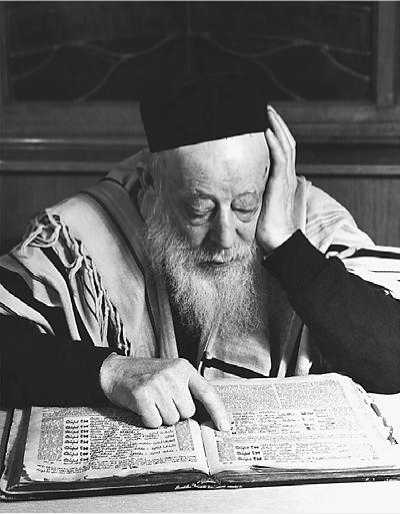 A rabbi reading the Talmud. Reproduced by permission of the Corbis Corporation.


Jewish culture in Spain reached a high point during the eleventh century. Following Hisdai's example, a number of Jews attained positions of influence in the Muslim government, none of them more prominent than Samuel ha-Nagid (hah-NAH-geed; 993-c. 1055). A Talmudic scholar and military commander, Samuel was the actual power behind the caliph, handling all political and military matters himself. He also found time to write several classics of medieval Jewish scholarship.

Conditions for Spanish Jews began to decline after the Almoravids took power in 1086. Not only were the new rulers less tolerant than the

Umayyads (Muslim rulers) had been, but Christians were beginning to reconquer the northern part of the country. The takeover by the Almo-hads in the 1100s signaled an even further decline in the Jews' situation, yet it was during this period that Spain produced the greatest Jewish thinker of the Middle Ages: Moses Maimonides (my-MAHN-uh-deez; 1135-1204). As Muslim philosophers before him had done, Maimonides attempted to strike a balance between the philosophy of the ancient Greeks on the one hand, and religious faith on the other.

With the Almohads conducting massacres and forced conversions as they had done in Africa, many Jews fled


To other parts of Europe. Muslim power in Spain dwindled and conditions worsened in the 1200s, yet Jewish intellectual life continued to bear fruit. During this era, many talented minds embraced the cabala (kuh-BAH-luh), a mystical system for interpreting the Scriptures based on the belief that every word and punctuation mark in the holy texts contains a secret message.