Moldova is landlocked by Ukraine to the north, east, and south, and by Romania to the west. The area is about 13,000 square miles. Plains and river valleys make up most of the terrain. The forested Kodry Hills run through central Moldova, where the country’s highest point, Mount Balanesti (1,410 feet), is found. Of the 3,000 rivers and streams running through Moldova the Prut, along the Romanian frontier, 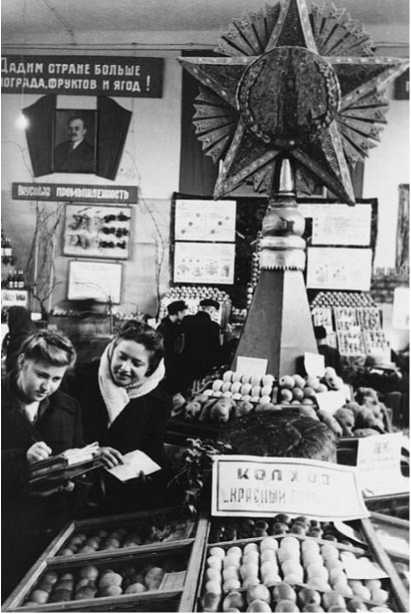 Moldovans shop at a fruit-and-vegetable stand in Kishinev (now Chisinau), Moldova, in the 1940s. (Library of Congress, Prints and Photographs Division [LC-USZ62-105363]) and the Dniester, forming the Ukrainian-Moldovan border, are the largest.

INCEPTION AS A NATION

The region that would become Moldova has been occupied by many ancient peoples in the centuries C. E., including Germanics, Slavs, Bulgars, and Pechenegs. In the 13th century C. E. Hungarian expansion forced many Vlachs to relocate south and east of the Carpathians, establishing the principalities of Walachia and Moldavia. In 1359 Bogdan I ruled the Moldavian principality, occupying the area between the Carpathian Mountains and the Dniester River; Walachia bordered the territory in the southwest. These principalities were ruled by either Hungary or Poland until their conquest by the Ottoman Turks (see Turkics) in the 16th century.

The principalities in 1821; Russia established a and Turkey, confirming Walachia and protectorate over the two principalities in Moldavia, now united with Bessarabia, as inde-1821, eliminating Ottoman control. The Treaty pendent principalities paying tribute to the of Paris in 1856 ended the wars between Russia Ottoman Turks.

In 1862 the two principalities united as a hereditary monarchy under the name of Romania; they received international recognition in the Congress of Berlin in 1878. Romania acquired Transylvania from Hungary and officially incorporated Bessarabia at the end of World War I (1914-18). The Soviet Union (USSR) did not accept Bessarabia’s unification with Romania and designated the territory east of the Dniester River as the Moldavian Autonomous Soviet Socialist Republic. The Soviet Union won Bessarabia in the German-Soviet Nonaggression Pact and occupied Bessarabia in 1940. The Moldavian Soviet Socialist Republic was formed, including central Bessarabia and the Trans-Dniester region. In 1990 the Moldavian SSR was renamed Moldova. The next year it declared independence from the Soviet Union and became the Republic of Moldova.

Created by Stalin in 1940 out of one portion of the ancient state of Moravia, Moldova lacks ethnic, political, or cultural legitimacy as an independent state and has been continuously torn between competing political projects: as a new European nation, a new colony of Russia, or territory integrated into the Romanian state. From the beginning the Soviet Union instituted policies aimed at drawing Moldova into its own sphere and away from the rest of Europe. This was most evident in the Soviet language policy, which maintained that the language of ethnic Moldovans was entirely separate from the Romanian language. To reinforce this idea the Soviets mandated that the Moldovan language would no longer use the Latin alphabet and would be written in the Cyrillic alphabet.

In recognition that the country lacks a unifying ethnic heritage, Moldova now emphasizes ethnic, cultural, and linguistic diversity, as well as mutual tolerance and peaceful coexistence of ethnic groups. Moldovan, now fully recognized as Romanian, is an official language of the country to be used in all political, economic, social, and cultural affairs. Russian is considered a language of interethnic communication. The use of Ukrainian, Gagauzian, Bulgarian, Hebrew, Yiddish, Rroma, and other languages of ethnic minorities is not discouraged. In terms of foreign policy the priority is given to upholding ties with the Moldovan diaspora abroad and the development of ties with the ethnic minorities’ historical home countries, enhancing cooperation with other countries and international organizations in the sphere of human rights protection.

Andrei Brezianu. Historical Dictionary of the Republic of Moldova (London: Scarecrow, 2000). Constantin Burlacu. History of Moldova, and Its Connection with Political and Social Circumstances from the Earliest Times to the Present Day (Arad, Romania: S. C. Gutenberg, 2002).