The Battle of New Orleans

During the War of 1812 a conflict erupted in the Southwest involving a faction of the Creek Indians known as the "Red Sticks." When Indians attacked Ft. Mims in the Alabama territory and killed several hundred residents, Major General Andrew Jackson led the Tennessee militia in a series of battles against the Creeks that ended at Horseshoe Bend in March, 1814.

In May Jackson was named American commander in the New Orleans area, just as the British were planning to take New Orleans with a large force of 7,500 veterans under Sir Edwin Packenham. The British planned to take control of the entire Mississippi River Valley. 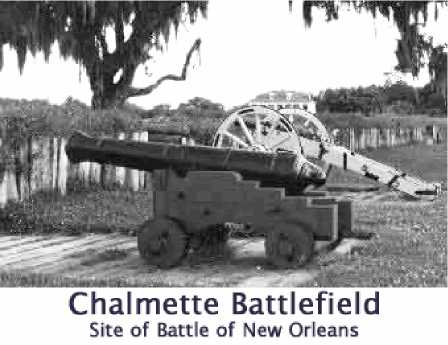 A nighttime raid by Jackson's men disrupted Pakenham's march on the city from the east, and Jackson then took up a strong position south of New Orleans between a Cyprus swamp and the east bank of the Mississippi. Jackson's force was a motley collection of Tennessee and Kentucky sharpshooters, members of Jean La-fitte's pirate band and various volunteer groups of Creoles and fire brigades from the city. He quickly constructed heavy breastworks along his defensive position that offered good firing positions for artillery and riflemen. Jackson's flank were protected by the Mississippi River and the Cyprus swamp.

On the morning of January 8, 1815, Packenham's force of over 5,000 redcoats disembarked below Jackson's position and prepared to advance. Veterans of campaigns against Napoleon's troops, the British were confident of swift victory and expected to dispatch the Americans without difficulty. They advanced confidently upon Jackson's entrenchments, but were met by a rude shock. Behind the parapets (which can be seen in the picture above) were 4,500 defenders, many of them expert rifleman. They waited for the attacking British to get well within range and then let loose a furious volley of artillery and rifle fire. The redcoats were cut down unmercifully, and Packenham himself was killed. The British suffered over 2,000 men killed and wounded; the Americans had eight killed and 13 wounded.

The Battle of New Orleans was one of the most one-sided victories in all of American military history, and although it had no direct impact on the war, it was a huge morale booster for the Americans, and created a hero in Andrew Jackson, which would eventually result in his election to the nation's highest office. The great irony of the Battle of New Orleans was that it actually took place after the peace treaty had been signed, but there was no way to communicate the news in time to prevent the battle. The Chalmette Battlefield is about seven miles south of the city of New Orleans. Jackson's battlements are well preserved, and it is easy to see how the British were hemmed in by the swamp and the Mississippi River. 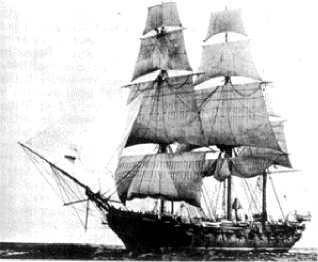 The Naval War. Although badly outnumbered, the U. S. Navy nevertheless distinguished itself during the War of 1812. New shipping was needed but was not built in at the outset of the war; thus the American blue-water Navy collectively was generally ineffective against the much larger Royal Navy. On the other hand, the American ships that were already in operation were better suited than British ships for one-to-one combat. The U. S.S. Constitution (left) under Captain Isaac Hull defeated H. M.S. Guerriere on August 19, 1812, in one of a number of individual ship victories for the Americans. American privateers did very well; 148 "legalized pirates" captured 1300 British ships, damaging the British cause. Commodore Oliver Hazard Perry's victory on Lake Erie secured the Northwest Territory firmly

Under American control. Another fleet victory by Commodore Thomas Macdonough on Lake Champlain turned back the attempted British invasion from Canada in 1814.35

After the American victory at Plattsburg on Lake Champlain, the English government decided to enter negotiations to end the war without addressing any of the issues that had caused the war. The Duke of Wellington also advised the British government to abandon the war. As much of the war had gone badly for the Americans, Madison was also ready to negotiate, and sent a peace party consisting of, among others, John Quincy Adams and Henry Clay to the city of Ghent in Belgium, where discussions were to be held. Both sides were weary of the war, and an agreement was reached to end the war and restore the status quo ante bellum.

The Treaty of Ghent, signed on Christmas Eve 1814, thus ended the deadlock of war with no major concessions granted by either side. The belated American victory at the Battle of New Orleans led to a widespread conception that the United States had won the War of 1812, and the Senate ratified the treaty unanimously. For Americans, the war succeeded splendidly. They had won a "second war of independence." Even after the treaty had been signed, Great Britain considered the war a stab in the back—they still saw the Yankees as "degenerate Englishmen." The British victory at Waterloo and the American victory at New Orleans, however, detracted from bad feelings on both sides. In addition, the end of the Napoleonic wars rendered issues such as impressment and neutral rights moot.

The Battle of New Orleans and the Naval War of 1812 demonstrated that American soldiers were capable of fighting when well led, and that American ships and sailors were very good.