Khirokitia, on the island of Cyprus, dating from between around 7000-6000 bce exhibited a well-organized architectural tradition. All the animals—goats, pigs, dogs, cats, and sheep—had been ferried to the island across the 55-kilometer stretch of water. Spread in a semi-circle on the flanks of a hill, the town, populated by about five hundred people, was protected by a massive stone wall almost 3 meters thick. As the population grew, a new wall, running roughly parallel to the old one, was added. The circular limestone houses varied in diameter from about 2 to 9 meters. The stones, bonded with mud, were covered on both the inside and the outside with a whitish earthen gypsum. Some of the houses were decorated with paintings, but not enough have been preserved to ascertain what was represented. The flat, timbered roofs were covered with reeds and mud. A family unit consisted of several circular structures grouped around a small open space. Such compounds were crowded next to each other with just enough room between them for passageways. Although the mother goddess was a preeminent religious theme, there appears to have been no central religious site. For the dead, a pit was dug within the family compound into which the bodies were laid along with various ritual objects. The entire was then covered with dirt and plaster. Since the village was some distance from the sea, the main economy was farming, animal tending, and hunting. The villagers also picked the fruit of trees growing wild in the surrounding area such as pistachio nuts, figs, and prunes. Fish were brought up from the sea or traded in exchange for agricultural or meat products. For reasons unknown, the site, and indeed all of Cyprus, was abandoned at some time and only reoccupied much later.

Obsidian was traded southeastward to places like Jarmo in Iraq, but also along the Mediterranean coast to Jericho in Israel (Figure 8.12). It was excellently sited on a hill just to the west of the Central Mountains. The site beneflted from the natural irrigation supplied by the Jordan River approximately 6 kilometers to the west, small streams to the north and south and, most importantly, a spring just next to the village itself. A typical hut in this tightly compacted town was about 3 meters in diameter. Some were used for sleeping but others, linked to form compounds, served as kitchens, stables, and storage. The modularity of the hut allowed for compounds to grow or shrink over time. Most astonishingly, however, the town was protected by a massive wall. A wall had also protected Khirokitia, but the Jericho wall was signiflcantly longer and stretched completely around the settlement. On its western edge and just inside the wall, a flat-topped conical structure rose over the height of the wall. It was made of stone and had a concealed inner stairway leading to the top. Though the top has been eroded away, there was probably a ritual structure of some sort made of wood or thatch at the peak. The purpose of this mysterious building is unknown. It is possible that it was a celestial observatory for it seems to be associated with a solstice alignment with a peak to the west of the settlement. Was it a type of proto-ziggurat where certain sacred ritual activities took place relating to the agrarian seasons? 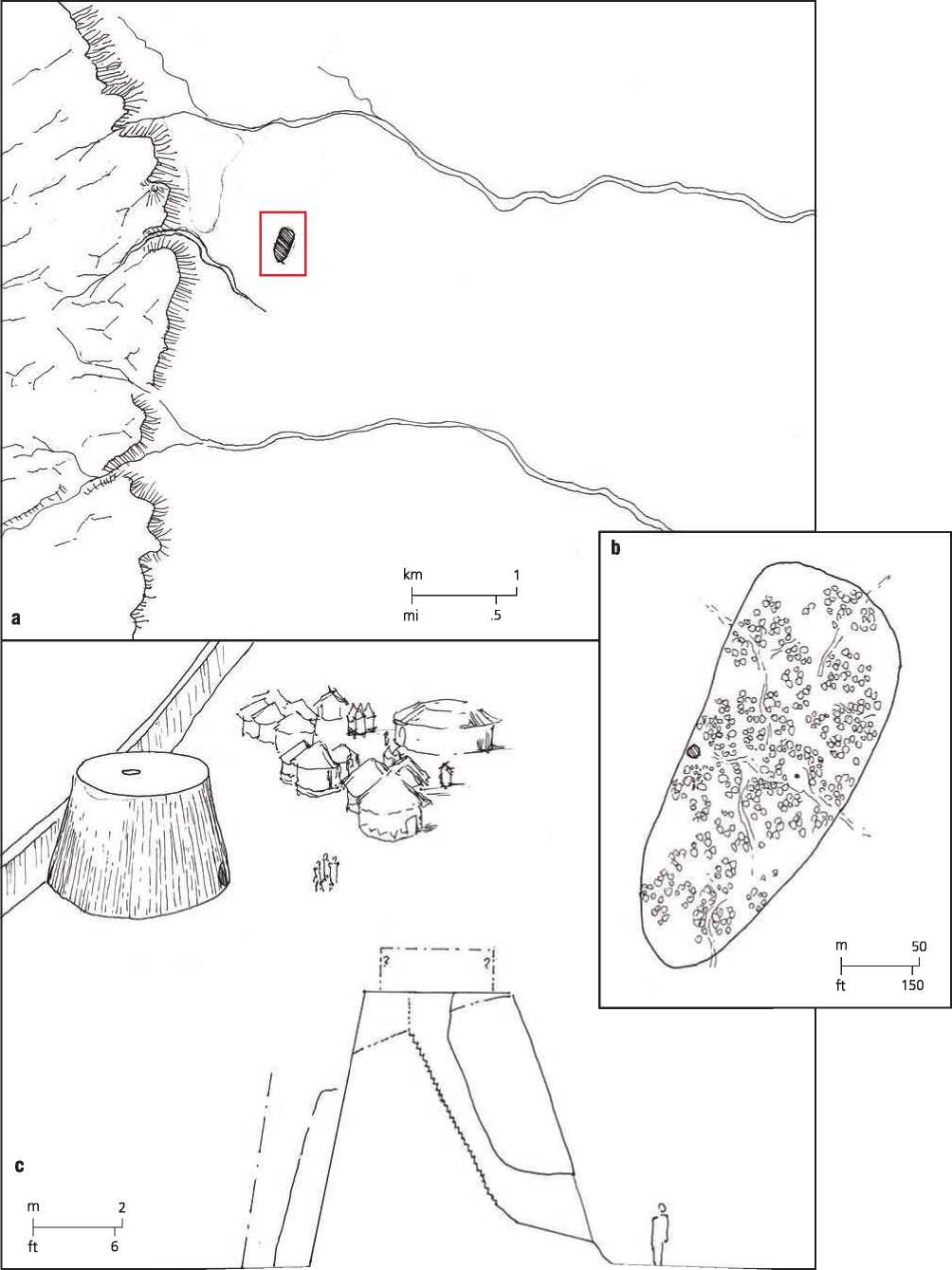 Around 6800 bce, there was a major upheaval and the town was destroyed. When it was resettled sometime later, the houses were rectangular with plastered floors following the Anatolian tradition. The change, which also coincides with the introduction of pottery, indicates the shift: to an organized polity based less on clan compounds than on a chiefdom culture. Rectangular houses imply a more determined relationship to the family unit that lived and worked in and around it. One can see the same shift at Abu Hureyra in northern Syria. The settlement had two separate periods of occupation, the flrst around 9500 bce, when the village consisted of small round huts cut into the soft sandstone of the terrace. The roofs were supported with wooden posts, and roofed with brushwood and reeds. The huts were small, about 2 meters across, and were not used as work spaces, which took place mostly in the courtyards. And since they were partially sunken into the ground, they might only have been 2 or 3 meters at the peak from the outside. The settlement was abandoned for about two hundred years, probably at the advent of the Younger Dryas, when the weather turned colder and drier, but then around 7000 bce the people returned and established a much larger settlement. Mud-brick houses were constructed of substantial size, with flve rooms each about 4 by 2 meters. Secondary burials of bones were found in several rooms under the floor of the house. Many more women than men were buried in this way. The reason was the house was now their domain, where they had lived and worked. The women, it seems, had specific parts of space bounded by the limits of the house; their territory was a frame for their activities. Men, by way of contrast, were increasingly associated with the outside world, with animals and tending the flelds.9

’Ain Ghazal, Jordan, dating back to 8000 bce, hardly evokes the once lush natural environment. Being an early farming community, the ’Ain Ghazal people cultivated cereals (barley and wheat) and legumes (peas, beans, and lentils) in flelds above the village, and herded domesticated goats. It was inhabited by about as many as three thousand people, making it a major settlement. It might have looked somewhat like the village of Dana in Jordan, except that instead of being set up on a hilltop it was placed on terraced ground overlooking a river (Figure 8.13). 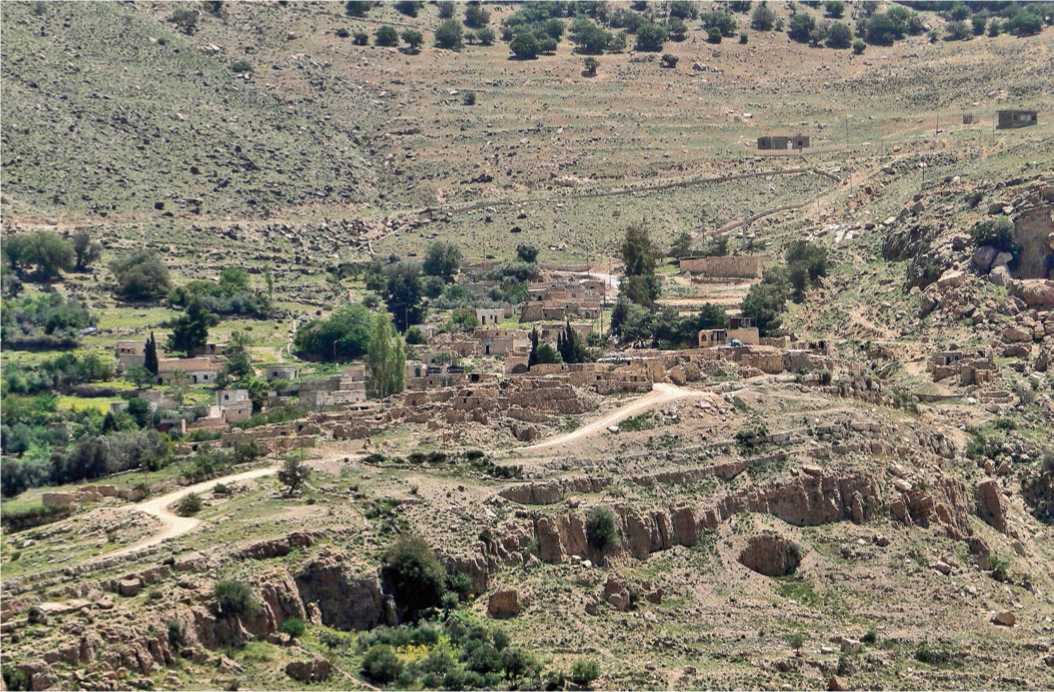 The rectangular mud-brick houses accommodated a square main room and a smaller anteroom. Walls were plastered with mud on the outside, and with lime plaster inside that was renewed every few years. The floors were plastered red indicating the continuity of sacred functions.

Numerous zoomorphic flgurines were found, but what is remarkable is the homogeneity of the subject matter. During the 2,000 years of occupation at the site, the same animals were made again and again in the same style, namely bulls with emphasis on the animal’s foreparts. The heads, large sweeping horns, powerful necks, and shoulders contrast with the small, tapering rear ends. They are modeled in unbaked yellow-brown clay. They were found in difierent circumstances. Two animals that were portrayed as having being stabbed, with three miniature blades inserted in the throat, abdomen, and chest, were placed side by side in a tiny pit covered by a limestone slab beneath a floor in the corner of a room. Although the building appears to have had a domestic function, in previous phases it had also held unusual burials: flve funerary pits arranged around a hearth—an infant under a doorway, a cache of three adult skulls, and a child’s skull treated with black pigment. In another case, a clay bull was found in a storage bin where it was associated with three cattle bones, one of them bearing an incised pattern. The flg-urines might have been used in soliciting omens, but could also have been used in agricultural rituals. Burying small flgurines in freshly planted crop rows is still practiced in some villages in Africa. Also possible is that the entire village served as a regional ritual center involving the combination of scariflces and oracles.10

The development of social difierentiation was clearly expressed in the human burials, of which there were three types. Special people were buried beneath the floors of houses, but since these are both males and females, the selection rules for this distinction remain unknown. Furthermore, afl:er a suitable time for the flesh to decay, the burial pit was reopened in order to remove the head, leaving the lower jaw behind. This is an ancient First Society custom done to ensure that the dead person is transformed into a good and benevolent spirit. The spirits without the lower jawbones are considered to be less hungry and more sympathetic about sharing food with the living humans. Many people who died were not buried in this way, but what happened to them is simply not known; one might surmise a “cemetery” outside of the settlement, but so far, no such burial ground has been found anywhere in the Levant. The third type of burial was to throw individuals into the trash heaps outside of town. Whoever they were, slaves perhaps, it is clear that they lived in a low status compared to the majority of the villagers.