The term ‘Neolithic’ commonly refers to cultures with the following traits: farming as the main method of subsistence, fully sedentary communities (occupied all year round, rather than seasonally), and the production and widespread use of pottery vessels and ground stone tools. As elsewhere, the archaeological record of China shows that these traits did not develop at the same time during the Early Holocene period. Research during the next decade no doubt will reveal more variation in subsistence practices and community organization, partly due to more systematic recovery of plant remains through flotation and the collection of animal bones. Evidence is accumulating to show that the transition from a hunting and gathering subsistence economy to domestication of plants and animals took place in both north and south China. The earliest phases of the Holocene, beginning c. 8000 BC, are not well understood at present. By the end of the Early Neolithic period, defined here as c. 5500 BC, an agricultural economy was firmly established in more than one area. There also is evidence for increase in size of settlements and development of craft production (see Craft Specialization).

There is more than one area of interest for the incipient Neolithic period in northern China. The earliest site is Nanzhuangtou, located in central Hebei province (Figure 1). Radiocarbon dates place the occupation of this open-air site during both the Late Pleistocene and Early Holocene periods, with a span from c. 10 000 to 8000 BC. No plant remains were recovered, but the appearance of grinding stones in this early context probably indicates growing reliance on plant foods in northern China. Another significant finding was low-fired pottery, with a variety of surface decorations (plain, incised, and cord-marked). It is likely, then, that pottery vessels were produced prior to the first cultivation of plants. The excavators also report the presence of the domesticated dog at this early date, before any evidence for cultivation of plants. The early date for the domestication of dogs may represent a change to a more sedentary lifestyle. Dogs would have been useful for protection of residential areas and for hunting. Reports mention the discovery of another early site in the vicinity called Hutouliang. More research at northern sites dating to the critical Late Pleistocene-Early Holocene period is needed in order to trace the origins of millet agriculture in China. Millet clearly was a mainstay of the diet throughout the later Neolithic and historic eras.

There is more evidence for plant cultivation at later sites in northern China dating from c. 6200-5500 BC. There are undisputed domesticated millets (foxtail, broomcorn varieties) at Peiligang culture (c. 62005000 BC) sites in Henan and at sites from related cultures such as Cishan in southern Hebei. Large quantities are reported for this site, indicating considerable reliance on the crop. Early reports for Cishan mention evidence for domesticated chicken, in addition to dog and pig. Clay models of pigs also have been found. The excavations at Cishan yielded evidence for a mixed economy, from bones of wild animals and seeds of wild plants and nuts. There are other relatively early sites further west, such as Dadiwan in Gansu.

There were well-established, at least semi-permanent communities in these areas, judging from the presence of numerous houses, pottery kilns, burial areas, and a variety of pottery vessels. Painted pottery is evident at more than one site from this phase. At this point, another key pattern is evident that characterizes later phases of the Neolithic in several areas - elaboration of individual burials. In comparison with the few known Late Pleistocene burials, the changes are substantial and probably represent stronger beliefs about territoriality, kinship ties to land, and the importance of ancestors. Differences in status between families were minimal, judging from the quality and quantity of grave goods at the Peiligang site of Shuiquan. Other material evidence for rituals from this era has been found in northern China. At the Beifudi site in Hebei, archaeologists found pottery masks of humans and animals with numerous pottery vessels and ornaments. These objects may have been used when people made sacrifices to their ancestors.

There is mostly indirect evidence for agriculture at early sites in other parts of northern China. At Houli sites in north-central Shandong (c. 6300-5600 BC), plant-processing tools were recovered, possibly for millet, as well as bones of domesticated pig and dog. These too were substantial settlements, judging from the presence of houses, pottery kilns, and burials. At Xinglongwa sites (c. 6200-5400 BC) in Inner 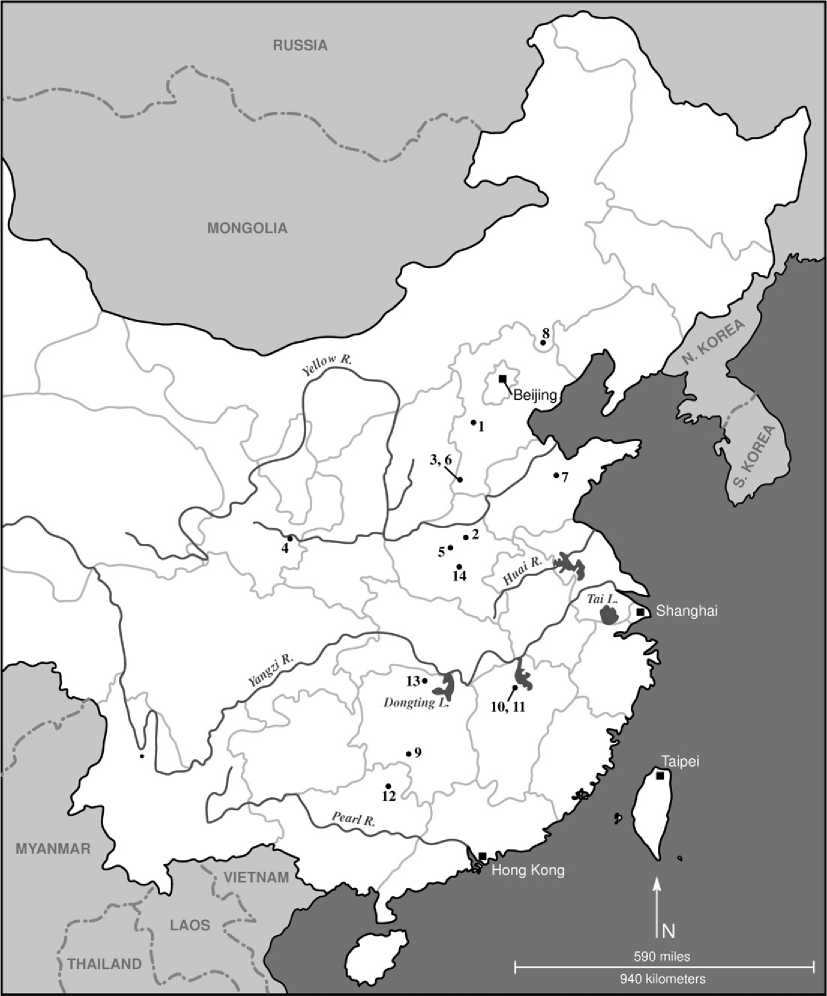 
Mongolia, chestnuts and bones of domesticated pig were found, as well as possible agricultural tools. There is new, direct evidence for early millet at the site of Xinglonggou, dated to c. 5700 B. C. Remarkable settlement remains were found during excavations at the Xinglongwa site, including a surrounding ditch and several well-preserved houses. The houses were situated in neat rows, indicating planning. The ditch, the earliest known of its kind, could have served to contain domesticated animals or protect residents

From wild animals. Another significant aspect of Xinglongwa sites is the presence of a few large structures (over 100 m2) that may have been communal in function. The jade ornaments from the Xinglongwa site are the earliest known in China, and perhaps in the world. At Xinglongwa, some graves were found in houses, rather than in formal cemeteries. Important ritual remains were found here as well, especially a human skull with a design of a face made by carving, drilling, and incising.

Cave sites in southern China are providing intriguing clues about the origins of rice agriculture. Given the tremendous importance of rice in historic and modern Asia as a whole, considerable research has been undertaken. One of the most intriguing sites is Yuchanyan in Hunan province. The deposits span the period from the Late Pleistocene to the Early Holocene period, c. 12 000-8000 BC (and possibly later). A number of wild plant and animal species (fruits, mammals, birds, fish, shellfish) have been identified. Notably, remains of cultivated rice are reported, in the form of rice grains and phytoliths. Although the specific date of these remains is not known, the site is likely to produce more key information about the origins of rice farming. The dating of the low-fired, cord-marked pottery there also needs to be clarified. Several kinds of bone tools and ornaments were recovered, too. More research is needed to reveal the variety of subsistence methods during this period and possible causes for the onset of rice cultivation in some areas.

Other important cave sites where archaeologists have sought to find evidence for early rice cultivation are Xianrendong and Diaotonghuan (or Wangdong) in northern Jiangxi, and Zengpiyan and Miaoyan in Guangxi. Phytoliths of wild and domesticated rice have been reported for Xianrendong and Diaoton-ghuan. These sites also span the Late Pleistocene and Early Holocene, roughly c. 12 000-8000 BC, and later. The dates of the domesticated rice need to be clarified. Plant-processing tools such as grinding stones have been found. At Zengpiyan, there were early reports of domesticated pig. A recent, comprehensive reanalysis of the site indicates that the prior interpretation about pig domestication was wrong. Fishing and hunting are evident from these four sites, judging from the recovery of bone harpoons and bones of wild animals. Hopefully future researchers will devise methods to recover evidence in southernmost China for the origins of root crop agriculture, given the historic importance of taro in these areas.

Low-fired and relatively thick pottery was recovered at these other early sites. Here too the early vessels exhibit a range of surface treatments, including incisions, linear impressions, and smoothing. At Miaoyan, the pottery is said to date to c. 13 000 BC, or older. According to the most recent report, the earliest pottery at Zengpiyan dates c. 9000-10 000 BC. There are other preliminary reports of early pottery in southern China, providing more evidence for the conclusion that hunting and gathering peoples began making and using pottery vessels, prior to the onset of plant cultivation, as in northern China. The use of pottery also probably indicates longer occupation periods at sites. This shift toward increased sedentism would have fostered more ties to land and rituals for ancestors. At Zengpiyan, mourners placed red ochre on the bodies of the deceased.

Later sites provide better evidence for rice cultivation. Rice grains inside pottery sherds were found at the Pengtoushan site from deposits dating to the earlier Pengtoushan culture (c. 6900-6200 BC) in Hunan near Lake Dongting. The grain was identified as wet rice. The people probably planted rice in fields that could be flooded naturally. The Pengtoushan settlement was relatively large, including several houses, burials (mostly secondary), and pits. The houses are pile-dwellings (raised houses on wooden posts), illustrating how people adapted to an aquatic environment. Another site called Jiahu, classified as a Peiligang culture site, is located in southern Henan and dates from c. 7000 to 6000 BC. In addition to domesticated rice, archaeologists found remains of an extensive settlement with numerous houses, pits, burials, and stunning artifacts. The unusual preservation of organic remains in the wet deposits yielded several items of ritual significance. These included bone flutes in burials (Figure 2) and modified turtle shells (some with incised symbols) containing pebbles - possible divination tools. Music may have been an important part of rituals (see Ritual, Religion, and Ideology). The graves contained a variety of goods, revealing evidence for mortuary ritual and multiple social roles of the deceased. The different phases associated with the several styles of burial (primary vs. secondary, multiple vs. single) should be examined further. Pottery production was well established, judging from the discovery of painted vessels and what appears to be the earliest kiln in China.