The difficulty of dating these various constructions as well as the numerous regional variants in design and use make a clear understanding of the history of how the ideas associated with these tombs moved across the space and time of Europe and into England and Ireland a difficult proposition.33 The use of large stones as ritual markers certainly goes back at least to 6900 BCE at Atlit-Yam, Israel, an extensive pre-pottery settlement that once lined the banks of a small inlet os' the coast. It is now submerged under about 10 meters of water. Earthquakes are primarily responsible for its sinking. A set of seven upright stones (1-2.1 m high) form a circle (ca. 2.5 m in diameter) that is open to the northwest. Some of the stones have shallow cup-marks ornamenting their surface. A freshwater spring was at the center of the circle.

There can be no doubt, however, that some of the oldest megalithic structures can be found near the southeast coast of Spain, such as Cueva de la Pastora or Les Llometes, which implies that the megalithic culture made landfall there and worked its way westward to Portugal and then up the coast as well as south into Africa. Most of the Spanish tombs have ten or more bodies, but some larger ones hold a hundred or more (Figure 10.26). 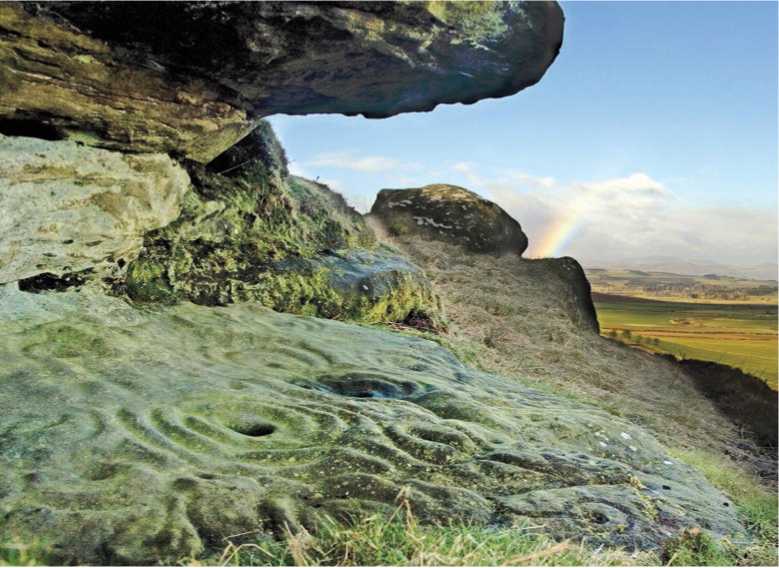 The difierence between old and new is particularly striking at Evora in Portugal. In contrast to the shell midden society that for two thousand years had inhabited the estuaries some 60 kilometers northwest, Evora is in the highlands. It seems that the newcomers were particularly taken by a landscape of unusual boulders and rock outcroppings. Between 4000 and 2000 BCE, hundreds of graves, dolmens, and cairns were erected in an area about 20 kilometers in diameter.

Although Evora was a ritual landscape on the grand scale, it can hardly compare to Car-nac on the western coast of France. Among the mounds, the largest, known as the Tumuls of Saint-Michael, was constructed in the fourth millennium bce and measures 125 by 60 meters and 12 meters high. There are also several impressive dolmens scattered around the area. And it is not just the number and range of sites that one can find 10 kilometers in any direction that makes this place so unique, but also the alignments of large stones over long distances. One is 100 meters wide and 1,165 meters long, running southwest to northeast and formed of almost 1,100 standing stones or menhirs in 11 rows. To the east, a smaller group of 555 stones, the Kerlescan alignment, is composed of 13 lines with a total length of about 800 meters. At the extreme west of this alignment, where the stones are tallest, there is a stone circle. There may also have been another stone circle to the north. How these stones worked as celestial observatories is much debated, but there is agreement that they were meant to follow the movements of the moon and stars (and not the sun), as would have been typical for early agrarian-based societies. We have to imagine in all this a religion that saw the natural forces of the earth and the skies, the passage of the seasons, the shape of the landscape, and even the rocks that were on its surface as a unified space saturated with spiritual meaning, connecting the dead to the living.