By AD 1200, Taino culture on Hispaniola was fully established; most of the characteristics observed by the Spanish, who arrived three centuries later, emerged during this period. Both Chican Ostionoid and Meillacan pottery and their local variants persisted into the fifteenth century in northern Hispaniola, central Cuba, Jamaica, and the central and northern Bahamas (which was settled by this time). Chican pottery is characterized by constricted open, boat-shaped, or constricted bottle-shaped vessels with carved or broad-lined curvilinear incisions sometimes in line and dot patterns (Figure 10). After AD 1200, pottery became more elaborate. Modeled-incised lugs depicted zemis, animals, gods, and caciques wearing ear spools and elaborate headdresses adorned the sides of vessels. At numerous sites in Hispaniola, Meillacan and Chican ceramics are found in the same strata.

Basketry-impressed Palmetto ware, which appears after AD 1100 in the Bahamas and Turks and Caicos, reflects complex Lucayan basketry traditions (Figure 11).

Throughout Hispaniola, Cuba, the Bahamas, and Jamaica, there was an increase in the number, type, and size of settlements. Except for western Cuba where a foraging subsistence economy was practiced, people grew manioc (the staple crop), maize, gourds/ squashes, varieties of peppers, tobacco, sweet potato, papaya, avocados, peanuts, yautia and other roots and tubers, engaged in arboriculture, and collected wild plants. Terraced fields are reported from Puerto Rico; irrigation was practiced in parts of Hispaniola. In the Bahamas and Turks and Caicos, fields were created in low-lying interdune areas. During this time, fish and shellfish dominated the meat portion of the diet, with minor contributions from iguana, hutia, and other animals.

By the late fifteenth century, the Greater Antilles, Bahamas, and Turks and Caicos consisted of many linguistic and ethnic groups that interacted with one another through trade, exchange, marriage, and political alliances. Although culturally diverse, the people who lived here are known collectively as the Taino, meaning ‘good’ or ‘noble’ in classic Taino. The Indians of Hispaniola used this term when speaking to the Spanish in order to differentiate themselves from other groups. At the onset of Spanish entry into the Americas, the people of the Greater Antilles, the Bahamas, and the Turks and Caicos spoke at least three languages (classic Taino, Ciboney Taino, and Macoris) and two dialects, Ciguayo and Guanahatabey.

Hispaniola was organized into five large and several smaller stratified chiefdoms or cacicazgos made up of: caciques (paramount ruler-chiefs) and their immediate families; nitainos, believed to be nobles, who assisted the caciques; and naborias or laborers. The behiques (shamans), who served as advisors and healers, were considered nitainos. A cacicazago consisted of 70-100 villages made up of several thousand people. Inheritance was matrilineal; residence patterns may have been avunculocal. Caciques were invested with religious and political power, controlling economic, craft, and artistic labor, production, and distribution. Puerto Rico, eastern Cuba, and Jamaica were divided into smaller-sized, less politically complex polities, but more and bigger ballcourts were constructed during this time in Puerto Rico suggesting some form of social restructuring from the previous period. The Turks and Caicos and Bahamas may have been organized into small, less stratified cacicaza-gos. Hunting-gathering populations (Guanahatabeys) lived in western Cuba and southwestern Hispaniola.

The Taino cosmological system consisted of a pantheon of deities such as Yiicahau, the god of cassava, Attabeira, the fertility goddess, and 12 lesser deities. Zemis were ancestor-gods and/or shamanic spirit-helpers who possessed spiritual, political, and/or healing powers. They were made from stone, shell, bone, coral, wood, ceramic, woven cotton, and other materials and resembled a combination of human, animal, and supernatural creatures drawn from a pantheon of spirits and ancestors (Figure 12). The objects often differed in material, style, and decorative treatment from island to island. Zemi were often depicted in rock art. The ingestion of hallucinogens such as cojoba was an integral part of spiritual life facilitated by the use of elaborate paraphernalia including inhalers, vomiting sticks, snuff tables, and spoons. Shamans (behiques) and shaman-caciques served as the expert translators of these experiences and were sometimes depicted in their altered states (Figure 13).

The Taino and their Chican Ostionoid predecessors of Puerto Rico and Hispaniola played a ballgame on leveled courts or plazas (bateyes). Differences in shape, appearance, size, and number reflect interisland political and cultural differences. For example, there are fewer ballcourts on Hispaniola, but they are larger than those found on the other islands. Two teams made up of about 20-30 players vied with 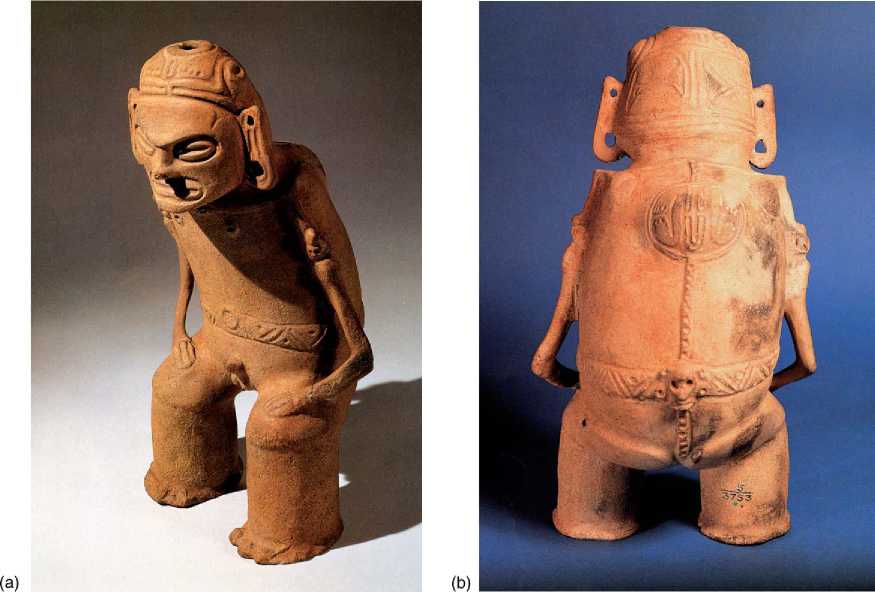 
One another to send the ball toward its goal. Hands and feet were not allowed to come into contact with the ball, nor was it permitted to touch the ground. The ball was made from rubber and other materials. In Puerto Rico, ballgame participants wore elaborately decorated stone artifacts known as stone collars and elbow stones on their waists and arms that helped keep the ball afloat (Figure 14). The competitions helped to resolve social tensions, serving also as occasions for feasting, trading, and alliance creation. Women-only teams were known to play. In recreating Chican mythology and ancestral genealogies, the petroglyph-zemis lining the Caguana (Puerto Rico) ball court, served as visual reminders of history and social organization.

Low stools (duhos), which conveyed caciques’ and behiques’ position, wealth, prestige, authority, and power were used during ceremonies and other special occasions, including ballgames (Figure 15). They also served as gifts and elite burial accompaniments and caciques and behiques sat on them during the ingestion of cojoba. It is believed that the caciques sat on the stools with curved backs, while the behiques sat on ones that lacked backs.

The Taino also expressed themselves in music and dance. Ceremonies (areytos) signaling battles, marriages, and deaths of important personages and other significant events took place in the central plaza of the cacique’s village, which was larger than the surrounding ones.

The arrival of Columbus and the Spanish in 1492 brought devastation and upheaval. The earliest evidence of Spanish presence in the Americas, known from glass beads, European ceramics, and a variety of metal objects, comes from the Long Bay site on San Salvador, Bahamas. After visiting several Bahamian islands and eastern Cuba, Columbus left a garrison of men at En Bas Saline in northern Hispaniola in December 1492. Upon his return in December 1493, there was no sign of them. A few weeks later, he established a settlement to the east at La Isabela. Within a few short years, other settlements and a chain of forts were built. Initially the two groups exchanged gold and food for European trinkets, but Spanish abuses soon triggered Indian resistance that was matched in 1494-95 by brutal Spanish reprisals, resulting in the eventual, near-universal enslavement of the Taino. Then, in 1495-97, the Spanish 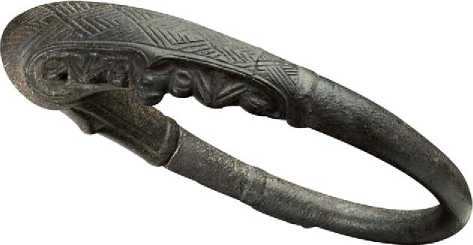 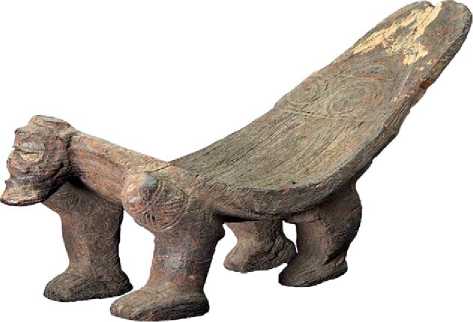 
Commanded that tribute (gold, cotton, food, labor), organized and negotiated through the caciques, be paid them every 3 months. The system was unsuccessful. In 1497, repartimiento, a system of forced Indian labor, was instituted, whereby the Crown gave land to the Spanish to be used for farming and ranching. Indians were assigned to Spaniards for whom they worked and received education in Christianity and ‘civilization’. In 1503, the encomienda system was established on Hispaniola; Indians paid tribute, worked in the mines for 4-6 months, and returned to their villages for the rest of the year (demora). The intentional and accidental import of Old World animals (cows, pigs, rats, mice) and plants (e. g., wheat, sugarcane, weeds) and deforestation due to the establishment of settlements and forts all contributed to major ecological changes. Within two decades, diseases (e. g., measles, smallpox, influenza), for which the aboriginal populations lacked immunities, physical abuse, overwork, food shortages, malnutrition,

On each of the large islands, unknown numbers of Indians fled to the mountainous interior, where they established maroon communities. With the exception of these groups, by the mid-sixteenth century or earlier, the Taino and the Lucayans had virtually disappeared as cultural entities. Their biological and cultural heritage survive today in the people of Hispaniola, Cuba, and Puerto Rico; many aspects of diet, medicinal knowledge, crafts, spiritual beliefs, and vocabulary draw on Taino culture. By 1511, Africans were systematically imported to replace the Indians as slave labor. The beginning of contemporary Caribbean culture, drawing on Amerindian, African, and European beliefs, practices, and lifeways was established.