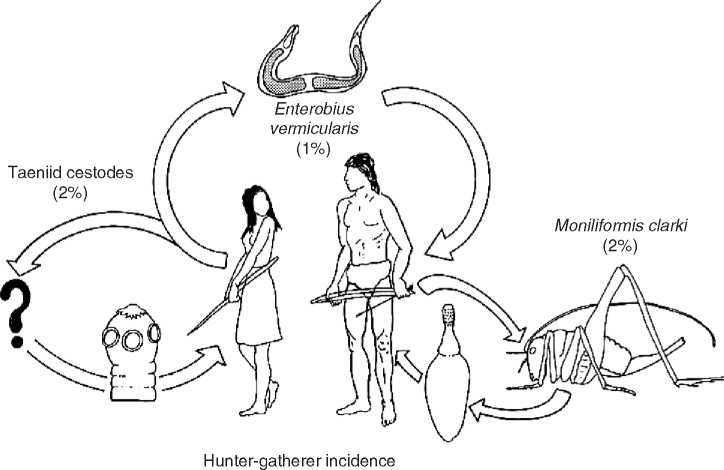 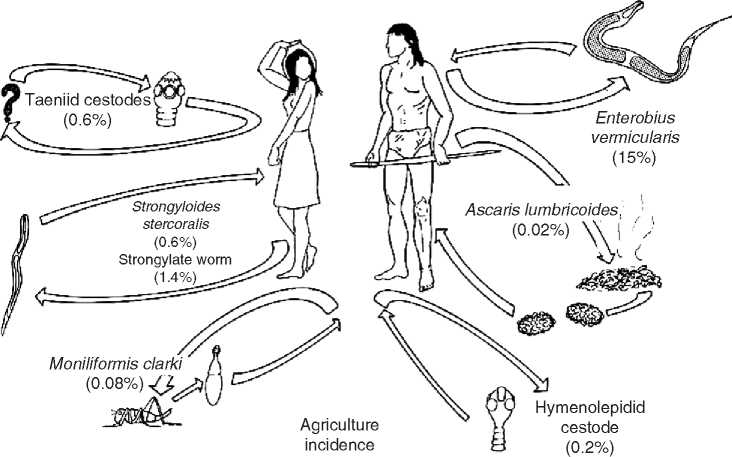 Figure 1 The relative prevalence and diversity of parasite infections between archaic hunter-gatherers and more recent agricultural ancestral Puebloans on the Colorado Plateau. The archaic people were rare host to just a few parasites. Ancestral Puebloans hosted many more parasites species at higher prevalences (from Reinhard 1996).

Reinhard recognized that the parasite variation between agricultural Puebloan villages nearly equaled the variation between agriculturalists and hunter-gatherers. This means that some settlements managed to control their parasite burden very effectively while others were simply overwhelmed by their pathogens. This topic was explored by a comparison of pinworm (Enterobius vermicularis) prevalence in coprolites by a group of specialists in pinworm disease. Pinworm was chosen as an indicator of general infectious disease because it is transferred from person to person and by contamination of living quarters and food (Figure 2). Some ancestral Pueblo communities were extremely parasitized. In a clinical setting, only 5% of feces from pinworm-infected people are positive for pinworm eggs. The percentages of coprolites positive for pinworm from several sites exceed this and range up to 29% (Figure 3). The lowest prevalence was found in small cave sites not containing walled 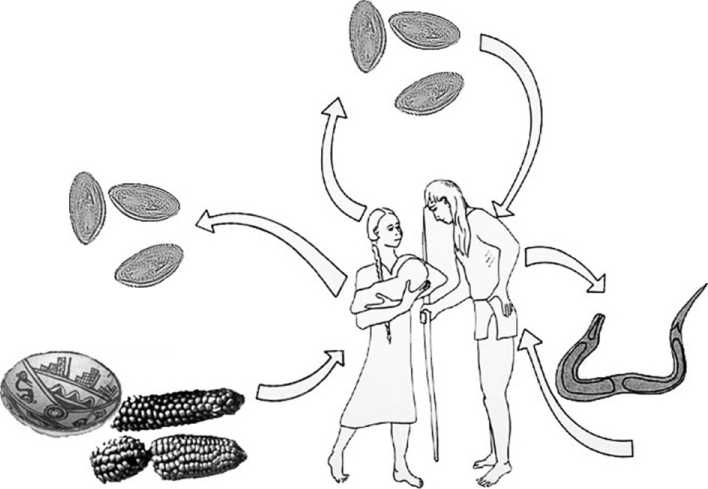 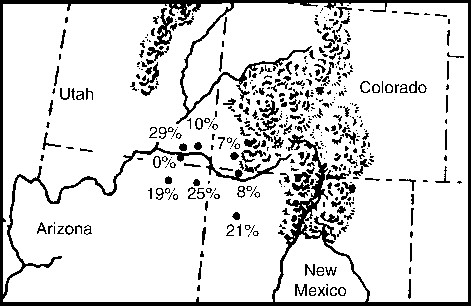 The data indicate that pinworm parasitism was unavoidable and that in some villages people had heavy infections. In such populations, pinworm infection prevalence reflects serious health risks, when one

Figure 4 This graph shows that village size, construction, and location inside or outside the caves influenced pinworm prevalence (modified from Hugo etal. 1999).

Considers that other pathogens are spread by the same means. Reinhard showed that the prevalence of parasitism co-varied with porotic hyperostosis prevalence at ancestral Pueblo sites where both coprolite and skeletons were studied (Figure 5). Porotic hyperostosis is a general skeletal pathology indicator long used to assess maternal-infant health.

In Brazil, the cultural transfer of parasites has been a focus for many years. The discovery of hookworm and whipworm in prehistoric South American

Figure 5 Although pinworm does not cause significant disease, pinworm prevalence is a good gauge of the general level of infection with other parasites and microparasites. Therefore, it can be compared with skeletal evidence of infectious disease. In this graph, the pinworm prevalence in coprolites has a positive correlation with the skeletal frequency of anemia in ancestral Pueblo sites. 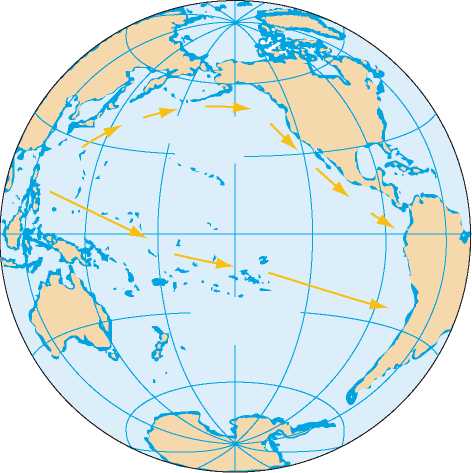 Figure 6 The presence of hookworm and whipworm in the prehistoric Americas indicates a non-Beringean migration to the New World at some point in time. This could have been a coastal migration or an oceanic migration.

Mummies and coprolites was sensational. These are human-specific nematodes that cannot parasitize humans in the Arctic and subarctic because they require warm, moist soils for maturation once the eggs are defecated. Therefore, the discovery of these parasites in prehistoric South America indicated that there was a nonarctic migration of humans from the Old World to the Americas.

The most long-standing debate in archaeoparasit-ology revolved around the discovery of hookworms in prehistoric sites. One species of hookworm, An-cyslostoma duodenale, was diagnosed from examination of adult worms in prehistoric Peruvian mummies, and later larvas were discovered in copro-lites and mummies from Brazil, and the United States. Hookworms are host specific, which means that one species of worm only infects one species of host. Ancy slostoma duodenale only infects humans. Hookworms require tropical or subtropical environments for their eggs to hatch and larvas to mature to infective stage. Finally, hookworms have their evolutionary origins in the Old World. Therefore, to reach the New World, they had to migrate with human populations from a tropical or subtropical environment (Figure 6). The conventional wisdom of the twentieth century was that hookworms arrived in the New World in historic times with European colonists and African slaves. This conventional wisdom has been so strong that over a dozen papers have appeared in anthropological and parasitological journals debating the validity and meaning of the hookworm finds.

In historic archaeology, archaeoparasitology focuses on sociological and urbanization concerns. Historic archaeologists can define the ethnicity, economic level, and social status of people associated with archaeological features. Therefore, archaeoparasitol-ogists have the opportunity to examine the effect of social differentiation on parasitism. The role of urbanization on the emergence of parasitic disease is a common theme in historic context along with the development of sanitation in controlling parasitism. Ascarid roundworms (Ascaris lumbricoides) and whipworms (Trichuris trichiura) are the main indicators for assessing the parasitic state of historic sites. These two species are most associated with fecal contamination, crowding, and poor sanitation. These parasites are used for comparative evaluation of the threat of parasitism between neighborhoods, villages, and cities. Other parasites, especially tapeworms and flukes associated with different types of meat, are useful indicators of ethnicity.

In the twenty-first century, the discipline of archaeo-parasitology became global. Researchers published parasitological finds from Japan, Korea, Germany, Peru, Chile, Brazil, and many other countries. The intellectual foci of these studies are diverse. In Japan, parasites were analyzed in context of the development of sanitation and food practices. They were also used to identify areas used by foreign ambassadors who hosted parasite species exotic to Japan but endemic to China. In Korea, archaeoparasitology Was used to trace the origins of indigenous species, especially trematodes. The impact of the expansion of the Inca Empire was defined in Chile. There, the Inca compelled indigenous people to move from small, scattered communities to large towns, resulting in increased infection with certain parasite species. Also, parasitism of the oldest hunter-gatherers, the Chinchorro, was characterized. Chinchorro consumption of undercooked fish resulted in heavy cestode infection. Archaeoparasitology in Peru examines the diseases of humans and domestic animals, and especially the transfer of deadly protozoa from animals to humans via insect vectors.

One theme that crosscuts the global diversity of modern archaeoparasitology is defining the distribution of parasites. In a Brazilian mummy, Sianto et al. discovered eggs of hookworm and of a trematode genus, Echinostoma. Echinostoma has never been found in people from the Americas and shows that an indigenous species has the ability to infect humans. This adds to the medical knowledge of the diversity of parasites infective to humans. On the Texas-Coahuila border, Reinhard et al. discovered the gross pathology of megacolon which is often associated with Chagas’ disease. Infection with Trypanosoma cruzi causes Chagas’ disease. Previously, Chagas’ disease was thought to have originated in the high Andes and then spread to lowland South America in historic times. The discovery of Chagas’ disease in prehistoric border of Mexico and Texas shows that the disease spread further and earlier than generally believed.