The history of the Toda, who live on the Nilgiri Plateau in southwestern India, is not fully known, but it seems that they were part of a cattle-herding tradition that was once vibrant in south India. Herders would move from valley to valley to provide resources to the agriculturalists, with whom they traded. One resource was cattle dung, which had both practical and sacred functions. In most Hindu religions, there are a range of rituals starting from birth to death that require cattle dung to light the sacred fires or to purify the place where the ritual is to be performed. Dung when burnt in these fires is known by several names such as bhuti (glorious), bhasam (devours all sins), and ksara (burns up calamities). Large ash heaps, dating back to over 2000 years ago are found through south India and must have been related to these types of rituals. These places were also probably the ceremonial gathering spots for the cattle herders. Maybe some two thousands years ago, one group, it seems, settled more or less permanently on the Nilgiri Plateau and the reason is not too hard to fathom. The area, though very remote, has a unique climactic ecosystem. It is like an island of cool breezes surrounded on all sides by steamy heat. Despite living in one region, the Toda engaged their animals in a yearly migration to the nearby rivers in summer, an event that is directly tied up to the ritual requirements for purity and rejuvenation. Only some nine hundred members still survive, constituting a mere isolated remnant of a once viable population group.19 Most of the Toda have assimilated into agricultural communities, especially with the arrival of the British, who transformed much of the area into tea plantations. A few groups still exist in the hills around the town of Ooty. Their supernatural world is populated by “gods of the mountains,” who are believed to inhabit the nearby peaks. They worship fire, rivers, and celestial objects, all of which are considered creations of the goddess Thekershi. The bufialo is especially sacred. Furthermore, all dairy-related activities—as well as the ordination of dairymen-priests—are subject

To complex rituals, which are accompanied by unique poetic songs. Funeral ceremonies are of the second-burial tradition meaning that the real burial is the one that takes place a year or so after death. At the first burial the body is cremated. This is a period of potential danger for the group since the spirit is not yet integrated with those of the ancestors. At the second burial, the bones are burnt again and the ashes buried in a circle of stones accompanied by rituals and sacrifices. For a woman a lower grade bufialo is sacrificed, whereas for a man more sacred animals are used. A ritual breaking of pots marks the end of the second funeral and is symbolic of the successful arrival of the deceased at the threshold of the afterworld.

The Toda do not build barns, but elaborate milking houses that are at the conceptual center of their villages, called munds, that are inhabited during the dry season. A typical settlement might comprise up to five dwellings, one to three dairy buildings, and various pens, called hundi, for the animals. The dwellings are usually built close together and are often aligned in a row. The houses, called arsh, are rectangular in plan with a barrel-vaulted roof that reaches down to the ground. Sturdy bamboo poles, about eleven, are placed on the front and rear facades and span the entire length of the house. The top-most beam, mohul podh, is significantly larger than the rest. These are held in place by arches made of split bamboo and rattan, a vine-like plant. Horizontally placed poles are then used to close the frame and serve as the support of the thatch (Figure 12.21). 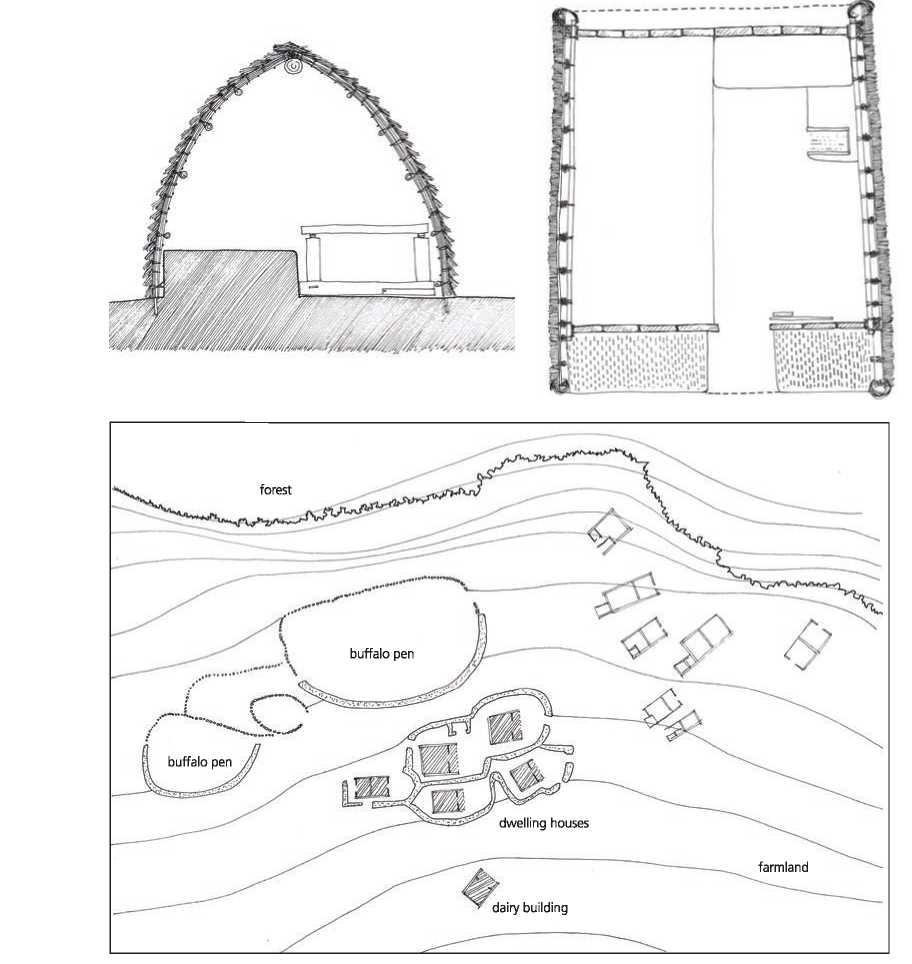 An earthen bench about 60 centimeters high runs along the entire length of the interior and serves as a bed and sitting area. A hearth is located near the back, opposite the sleeping platform. Since there is no chimney, smoke escapes through the thatch roof. Roughly in the center of the house is a small hole sunk some 15 centimeters into the floor, which divides the interior space into pure and impure areas. Only in the front section may the household’s milk be churned to produce butter and buttermilk; as churning is exclusively a male task, the front part of the house is associated with men folk. The nonritual area, where the hearth is located, is associated with women. Pure and impure connotations are also attached to paths and waterways.

The cattle enclosure, hundi, where the bufi'alo herd will be kept afl:er the grazing hours of the day, is essentially a circular open space along the slope of the hill. On the upper part a water tank will have been scooped out of the slope and at the far end there is a drainage slit opening to the valley. As in the temple, the entire space is partially sunken into the slope to make a leveled ground for the bufialoes. It is marked with two vertical stone posts for its entry.

The dairy, located at a distance from the living quarters, is held to possess an exceptional sanctity and many precautions are taken to maintain the purity of the building and its contents and of the dairyman priest himself. A Toda man may not approach the dairyman in person, except in a state of ritual purity. Women may not even approach a place from which the dairy building is visible. Furthermore, the milk products themselves are sacred, though to varying degrees. Buttermilk, for example, has less sanctity than milk itself, which is viewed as ritually the purest, while ghee, a type of clarifled butter, is not considered pure at all. Thus, it is possible to interpret the Toda dairy ritual as a process of conceptually diluting the extreme sanctity of milk downward so that its flnal product, ghee, may be consumed by all. In a sense then, the dairy building is the site where this transformation takes place. Certain elements of the Toda belief structure are still observed in certain Vedic rituals even today where ghee is ofiered to the deity by a priest who pours it into the sacred flre, called the gnihotra. But how foundational the ancestors of the Toda were to ancient beliefs is something that cannot easily be determined (Figures 12.22, 12.23, 12.24, 12.25, and 12.26). 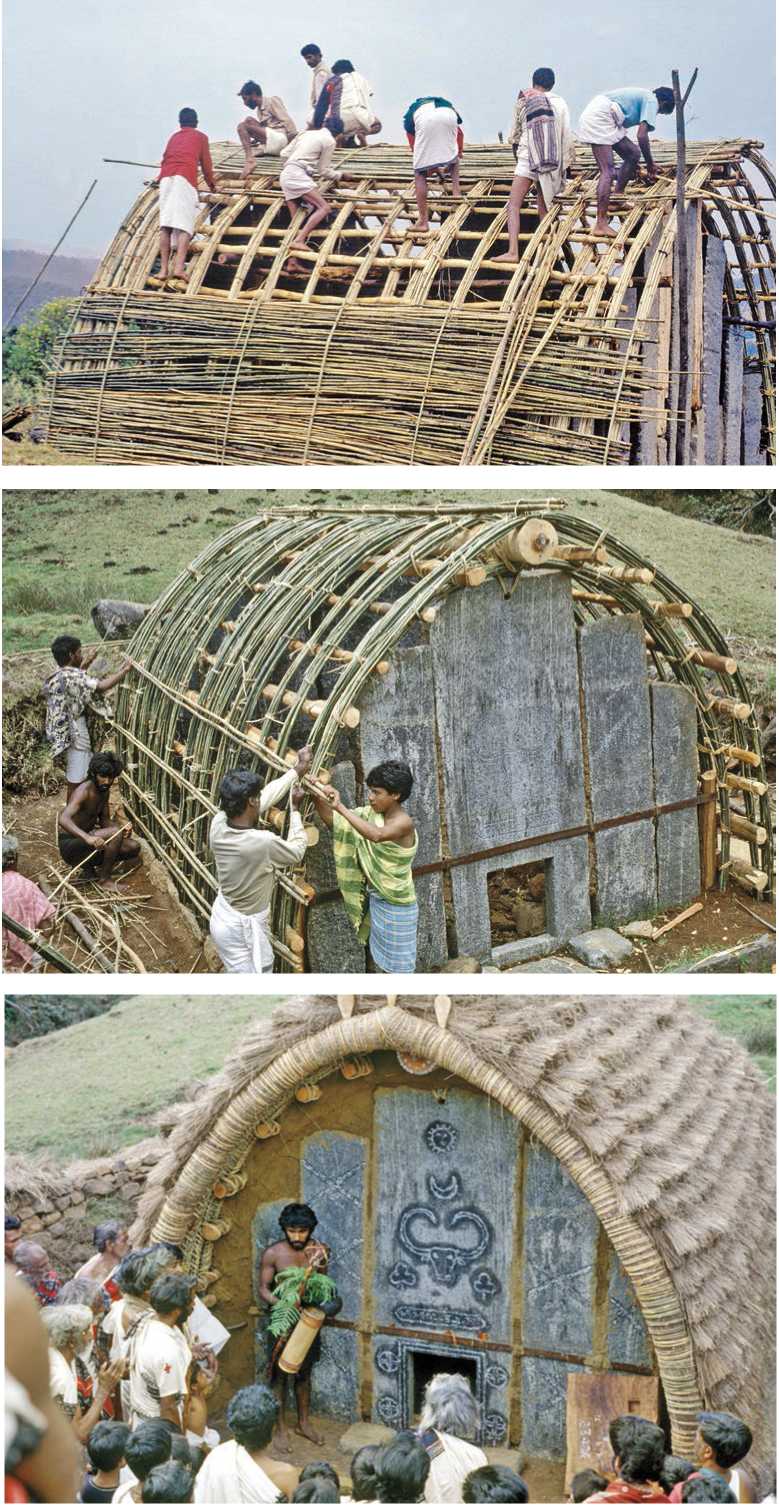 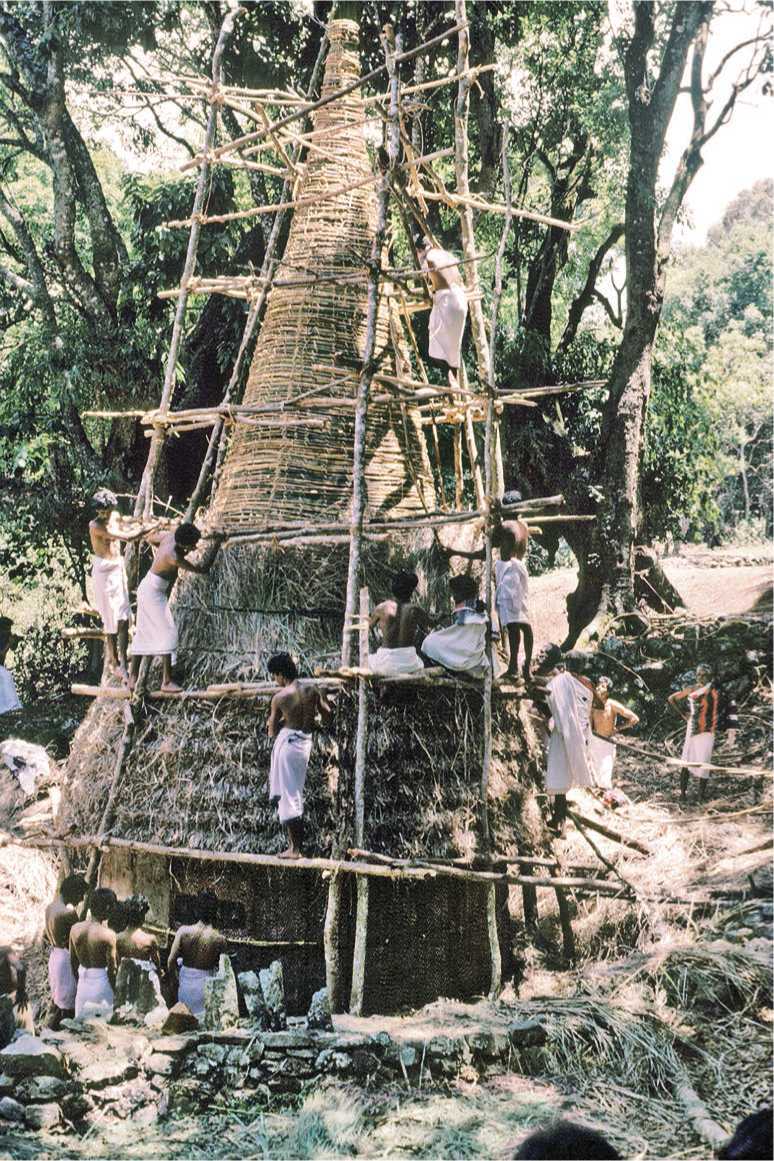 The dairy (palivarsh) is built on a similar model as the house except that the rear and front facades are made of stones. Nor can the building be repaired. The outer zone, with its raised bench along the side walls for the dairyman and his assistant, is equipped with a fireplace in the middle, while the main space of the structure, the inner sanctum, is reserved for the dairyman’s sacred duties, which mainly consist in the churning of milk to obtain butter and in preserving the resulting buttermilk. It is here, also, where the sacred dairy equipment is stored. When new roof thatching is required for the dairy building, a series of prescribed ceremonies is performed that guarantee that the purity of the dairy building will not be compromised (Figure 12.27). All equipment in the dairy is removed and the building is officially deconsecrated for the period of the repair. A seance takes place with the local oracle, who, during a trance, answers questions from the villagers. Only then can the repairs begin. Afi:erwards there is a ritual reconsecration and a shared sacred meal.20 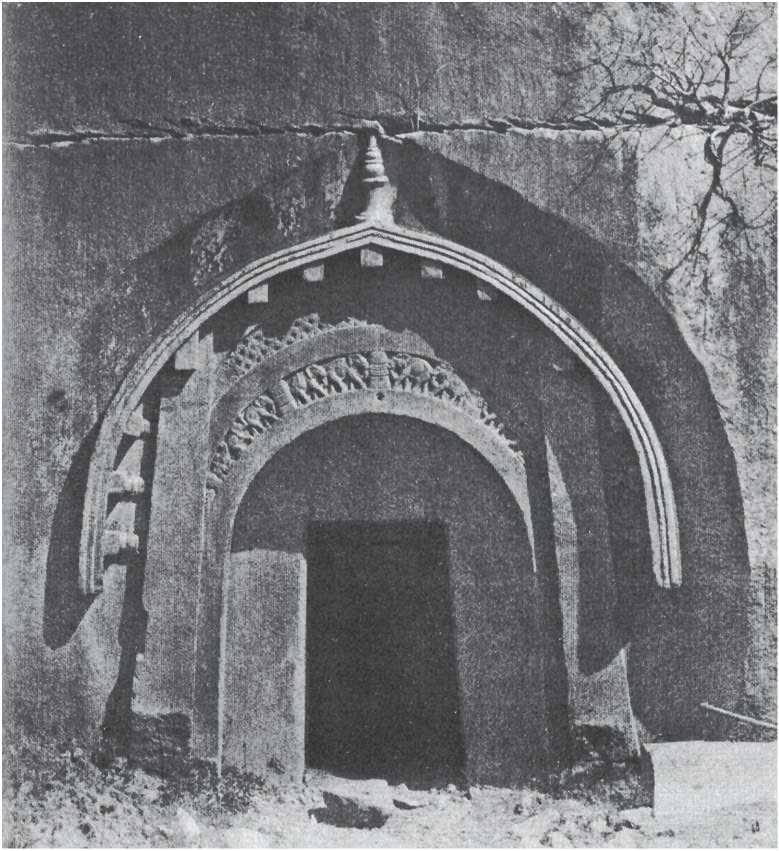 The sacred milk shed came to be inscribed into formal, sacred architecture when the Buddhists began to create rock-cut sanctuaries. One of the earliest, the Grotto of Lomas Rishi from the third century bce, features the symbolism of the milk shed at its entrance, from where it would be taken up as a recurrent theme of Buddhist temples. Lomas Rishi is far to the north, which implies that dairy hut architecture was quite widespread (Figure 12.28).

6.  The Ogiek problems with the Maasai are compounded by the Kenyan government, which seeks to displace them from the forest.

14.  This information is taken from Sidney Langford Hinde and Hildegarde Beatrice Hinde, The Last of the Maasai (London: William Heinemann, 1901).

15.  The Sema mainly inhabit the Zunheboto district. The Angamis tribes live in the Kohima district.

17.  The spread of Christianity and the creation of developmental programs have rapidly changed the Naga culture, which is officially considered “backward.” But the Mithun-tending people still maintain a strong attachment to their animist beliefs.

18.  Christoph von Furer-Haimondorf, The Apa Tanis and Their Neighbours, A Primitive Civilization of the Eastern Himalayas (London: Routledge: 1962). The information in this section is culled from Frederick J. Simoons, A Ceremonial Ox of India, The Mithan in Nature, Culture and History (Madison: University of Wisconsin Press, 1968).

20.  The interaction with neighboring communities has caused a lot of changes in the lifestyle of the Todas, who now increasingly venture into agriculture and other occupations. Though many have abandoned their traditional distinctive huts for concrete houses, a reverse movement is also afoot to build traditional barrel-vaulted huts. 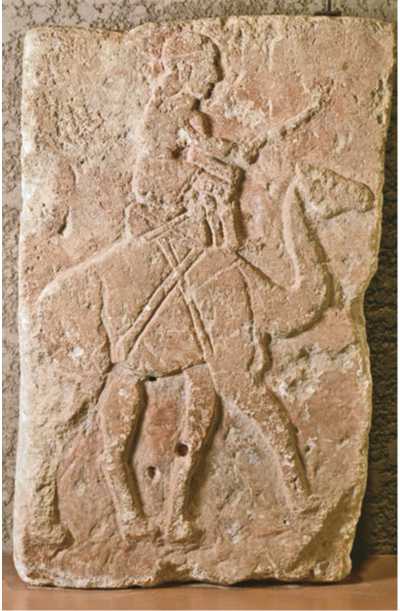