The Hohokam not only grew tobacco, agave, maize, beans, and squash in an area now occupied partially by Phoenix, Arizona, but they also grew the first cotton in the Southwest, a crop that was in high demand as a trade commodity. This gave them an especially powerful leverage in trade relations. The Hohokam could not have achieved this remarkable accomplishment without first designing and building an extensive irrigation canal system that was to become unique in the North American world. The Salt River, the Gila River, and the Santa River were the main suppliers of the water that flowed down from the mountainous regions at the southern end of a vast continental shelf into a series of broad valleys, some only 500 meters above sea level. The Hohokam recognized the uniqueness of this ecological zone. Although dry and sunny, it had relatively good soil; all that was needed was a water distribution system. They eventually built over 800 kilometers of canals ranging in size from two to about twenty meters across, with the larger canals serving as the main feeders. Passing through villages and fields, the canals got progressively smaller. With no draft: animals, everything was dug by hand. The area had another benefit in that the upland areas to the north, east, and south, and the desert to the west, were sources of obsidian, turquoise, argillite, galena, steatite, serpentine, and shell. These places were also good hunting grounds for antelope, jackrabbits, cottontails, bighorn sheep, and mule deer besides offering a continual harvest of edible and useful plants that grew in the upland environments.

The Hohokam irrigation system is not as obvious as it might seem at first glance. In fact, it has been long questioned why the Hohokam built such an extensive canal system on one of the saltiest rivers, the Gila, in North America. Beans and corn do not respond well to salty soil. The answer seems to be that these skilled agriculturalists planted locally growing mesquite trees, trees that are today usually considered a mere nuisance. Mesquite are relatively tolerant of elevated levels of salinity and also produce a prolific supply of food, building material, and firewood. Their bean pods can be dried and ground into a highly nutritious flour, which imparts a sweet, nutty taste to Indian breads. The pods are easy to collect and store and are edible even without cooking. The tree also enriches the soil with nitrogen and provides shade for the young plants in the summer. Mesquite was, of course, a well-known food source for locals for millennia before the arrival of corn. Its soil-enhancing qualities were also probably known. This shows how the arrival of corn was integrated into the plant-tending lifestyle of First Society people. It also explains why the Hohokam could successfully farm a region that today seems completely inhospitable5 (Figure 16.7). 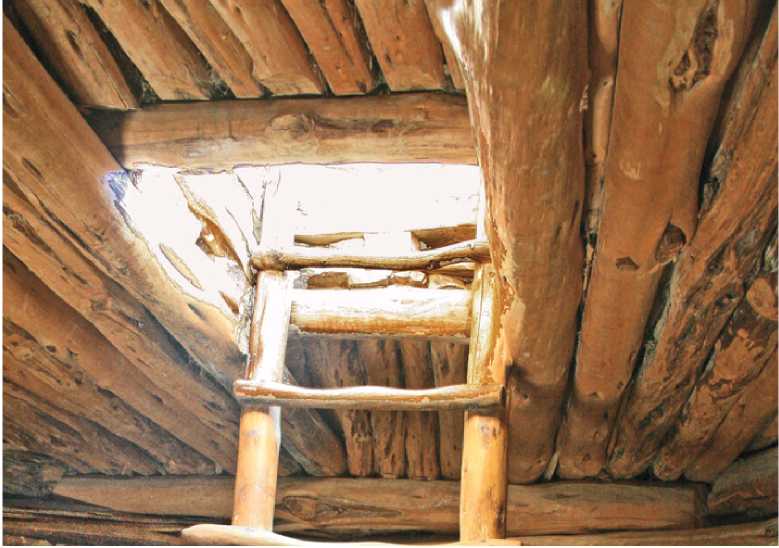 The large Hohokam settlement of Snaketown was situated on the north terrace of the Gila River (about 30 kilometers southeast of Phoenix) . It was founded around 600 ce and developed into an important center by 1000 ce. Protected from the river by a small bluff, it overlooked a large, flat expanse to the west that was only a few meters above the river. Most of the irrigation canals came from the Gila Butte, some 10 kilometers upstream. The river as it approaches the butte drops ten meters in the course of just a few kilometers, thus speeding up the water in the canal as the valley opens up westward (Figures 16.8a, 16.8b, 16.8c, 16.9a, 16.9b, and 16.10). 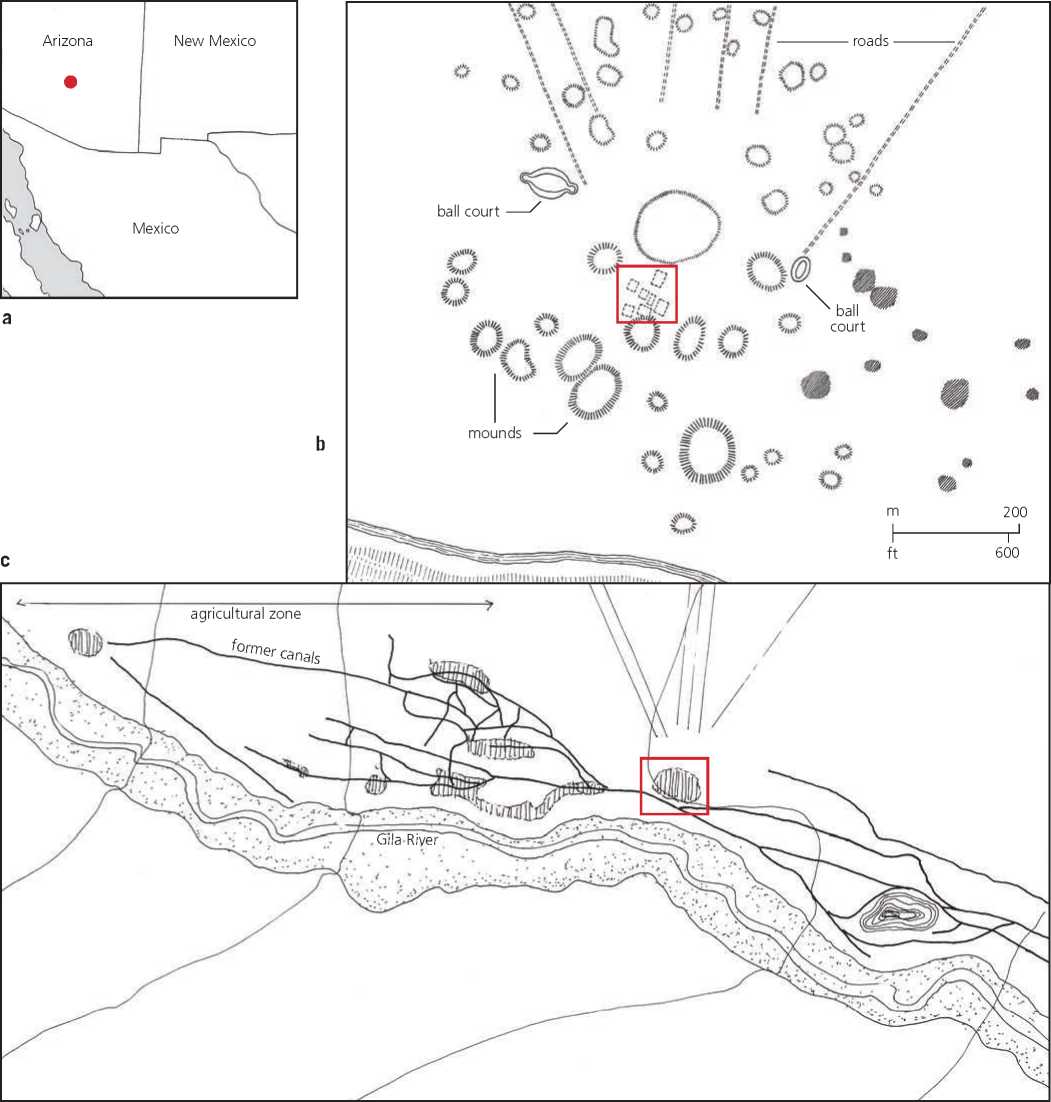 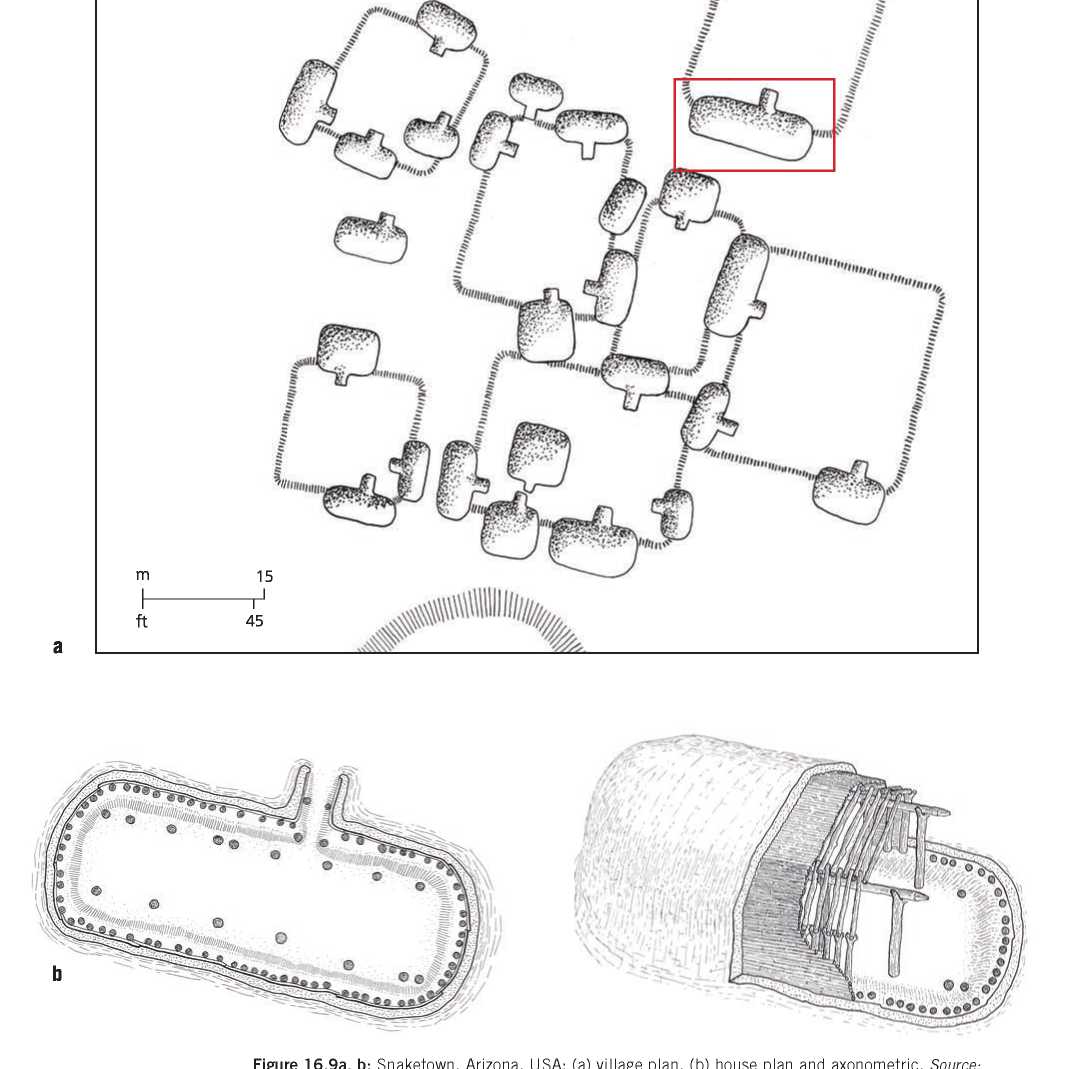 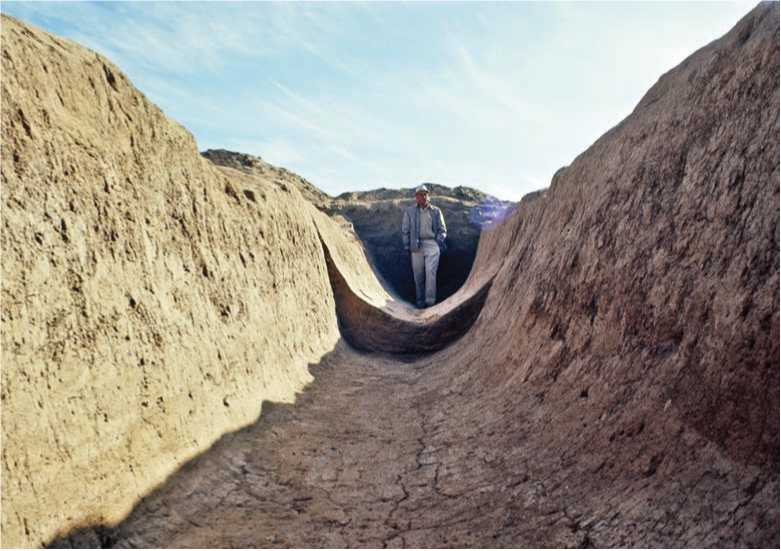 The settlement was quite large, and at its peak reached 800 meters across. It consisted of an inner and an outer residential zone. The inner zone, with its eight low earth mounds, formed an oval about 350 meters in diameter, offering space for an area of pit houses placed in a perimeter relationship to courtyards. One rectangular courtyard in particular had two larger houses facing each other. The houses are of the pit house type, the beams holding the roof standing on the floor of the pit, not on the surrounding ground level. They are rectangular with rounded ends. Steps lead down to the sunken floor level. The Are pits are situated near the door. The different sizes of the houses are indicative of the existence of social hierarchy. The walls were built of caliche, a hardened deposit of calcium carbonate that exists a few feet under the surface of the desert floor from where it can be excavated. When mixed with pebbles, sand, and water, a durable, concrete-like substance is created.

The settlement grew over time from a simple central plaza with houses around it to a rather congested site. It is difficult to tell how much of the city was a product of contingency and how much was planned. We also see the appearance of mounds capped with caliche, which is a hardened deposit of calcium carbonate that was found locally and then ground into powder and mixed with water to form a type of concrete. A cluster of large houses was situated between the central mound and one of these mounds, and near a well, access to which was probably tightly restricted. What these mounds were used for is now known.6

In the beginning of the ninth century, the Hohokam began to carve out large, ovalshaped, flat-bottomed courts with prepared floors, side walls, and a surrounding embankment. These courts apparently served as ceremonial performance areas. The largest, measuring 60 meters by at least 30 meters, was at Snaketown, west of the site in a new habitation ring. Five hundred people could easily have witnessed the events taking place there from the embankment. Soon courts of this type were built in almost every village. Because the Hohokam had contacts with the Mexican civilizations to the south, it is assumed that these were ball courts, but their actual function is not known. They might also have served for other communal events such as ritual dances. It has also been suggested that regardless of what rituals were performed in them, these courts were part of a large, regional festival tradition. They were in that sense, part of a networked ceremonial culture during which food items were probably exchanged for hides and obsidian, and alliances were made and reinforced. Snaketown was probably at the heart of this ceremonial landscape, with one of its principal exchange commodities being ceramic pots. There was excellent clay in the vicinity and indeed, facilities, tools, and raw materials for pottery manufacturing were found in a work area near the center of the site.7

At Shaw Butte, to the north of present-day Phoenix, the Hohokam built a solar observatory. It is a complex site, with markings charting various solar events through the year. The edifice is an oval-shaped, dry-laid masonry compound with multiple interior rooms, approximately 29 meters along the east-west axis and 23 meters along the north-south axis, constructed in the late twelfi:h century. The walls were 1 meter in height and as much as 1 meter thick, but they might have served as platforms, for it is unlikely that the structure was roofed. In the northeast side of this compound, there is an oval-shaped room that has a doorway facing northeast. A ray of light shines through this doorway during the summer solstice sunrise. In a square room on the northwest side of the compound, a pointed upright stone aligns with the summer solstice sunset. Inside and outside the compound, there are boulders that contain a variety of pecked images, or petroglyphs, with one standing upright near the compound’s center. The southwest face of that stone is marked by thirteen circles, with dots in their centers, placed in a swirling pattern. Concentric circles with dots represented the sun. From behind the stone, the sun at the summer solstice can be observed rising just over Four Peaks range some 20 kilometers to the east. At solar noon, a notch in the top of the stone allows a tiny shaft: of light to touch the middle of one of the circles. Winter solstice sunrise is marked by a shadow that splits the lowermost circle.8