The next place that developed an agricultural economy, beginning around 1800 bce, was to the north in the Casma Valley. It was another extreme environment, one of the driest, in fact, along the Peruvian coast and classified as subtropical coastal desert.23 The valley includes the Sechin River, which meets the Casma about 8 kilometers from the ocean. Like Supe, the culture in this valley arrived there fully intending to transform the river into an agricultural universe. This happened at the same time that the Supe Valley culture was falling into decline. Overcrowding and problems with irrigation maintenance might have played a part. It is likely that bit-by-bit, the people there abandoned the valley and moved 190 kilometers to the north to find work. And once the irrigation ditches were not properly and consistently tended, the whole system quickly collapsed.

As at the Supe Valley, each of the several centers in the valley was probably semi-autonomous, but nonetheless linked. Also, as at the Supe Valley, there were no cities in the technical sense, but rather kilometer-long networks of hamlets and farmsteads spread out next to the fields where the slopes fan out before reaching the valley floor. As more fields were created, new micro-unities developed, related to one or the other preexisting centers. How much friction there was between centers—if any—is not known. The people, as would have been typical throughout Peru would go to the centers on ritual days. As with Supe, the valley became an important energizer of the east-west, north-south trade networks. Obsidian had to come from the highlands and the wood used for roofs and doorways came from a tree that grows only between 1,500 meters and 3,000 meters above sea level. Salt was also important for the preservation of food and fish, with a major source between Salinas de Chao located 115 kilometers to the north.

For a while, Casma reigned supreme as an agricultural marvel. To the south one would have to travel 140 kilometers to find a valley of equal scale as Casma, which explains its strategic importance. To the north, there is a similar valley, Valle Nepena, but the sites in that valley were mostly built later during the Moche period. Why Casma Valley was chosen is anyone’s guess, but one possibility is that the southern branch of the valley leads up to a mountain pass that connects it with Callejon de Huaylas (Alley of Huaylas) a 150-kilometer-long valley that served as a type of mountain highway in the north-to-south direction.

Pampa de las Llamas-Moxeke (ca. 1800 bce) was among the earliest centers in the Casma Valley (Figures 11.25a, 11.25b, 11.25c, and 11.26a, 11.26b, 11.26c). Plant remains from this site include both the white potato and the sweet potato. The site contains more than a hundred platform structures aligned with two major edifices separated by a distance of 1.3 kilometers. They are oriented 90 degrees to the Casma River Valley and along the western side of a valley that opens into the Casma. Between the two structures there are several large plazas.

The function of the smaller structures is unclear, but the purpose of the larger ones is unmistakable. Moxeke is 170 by 160 meters at its base and 30 meters tall. It consists of platforms crowned by additional platforms. Its overall shape is rectangular with gently rounded corners. The outside walls of some of the terraces were ornamented with figures painted light red, emerald, white, and black. The size of the 3-meter-tall figures indicates that they were designed to be visible from quite a distance. Furthermore, their placement high on the mound front and extending around on either side serves to enhance their visibility to the audience in the surrounding plazas. A staircase leads up to a square walled enclosure half way up on a terrace. Behind this enclosure one ascends again but this time between two separate terrace mounds, each with ritual structures on their tops.

At the other end of the axis is a most unusual building—known as Huaca A—composed of thirty-eight squarish rooms packed into a larger rectangular building about 150 meters on the side with a large courtyard in its center. The organization of the rooms is complex. The structure, symmetrical around both axes, consists of four approximately equivalent quadrants. Three large spaces define its dominant central axis with smaller rooms to the sides. There are no shared walls between the room units. Each unit, with walls that are about 2 meters thick, was constructed as if it were a freestanding element, even if placed next to another. In some instances there are no useable spaces between the units. In other instances, the rooms are separated by corridors. 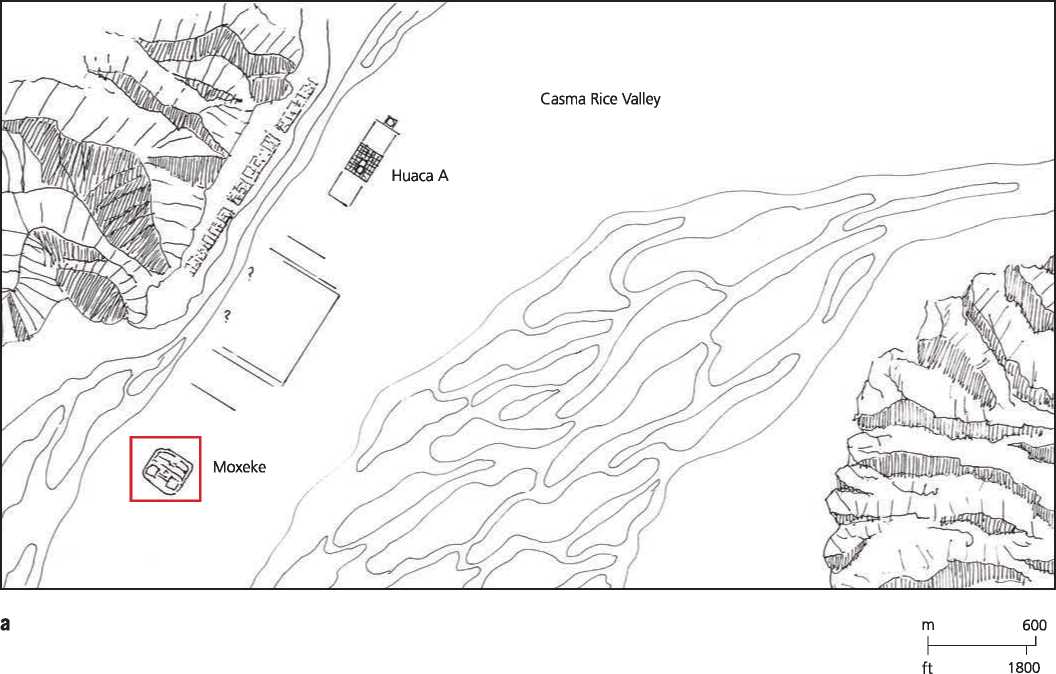 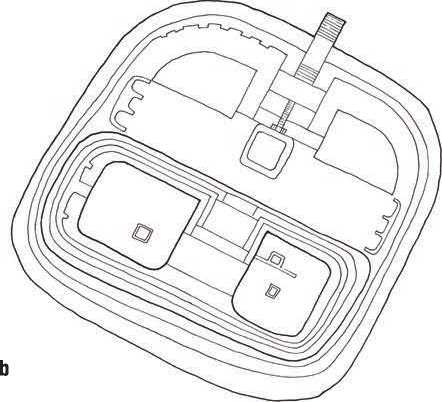 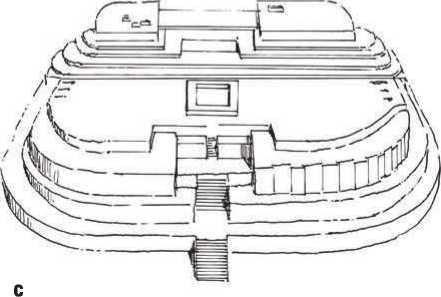 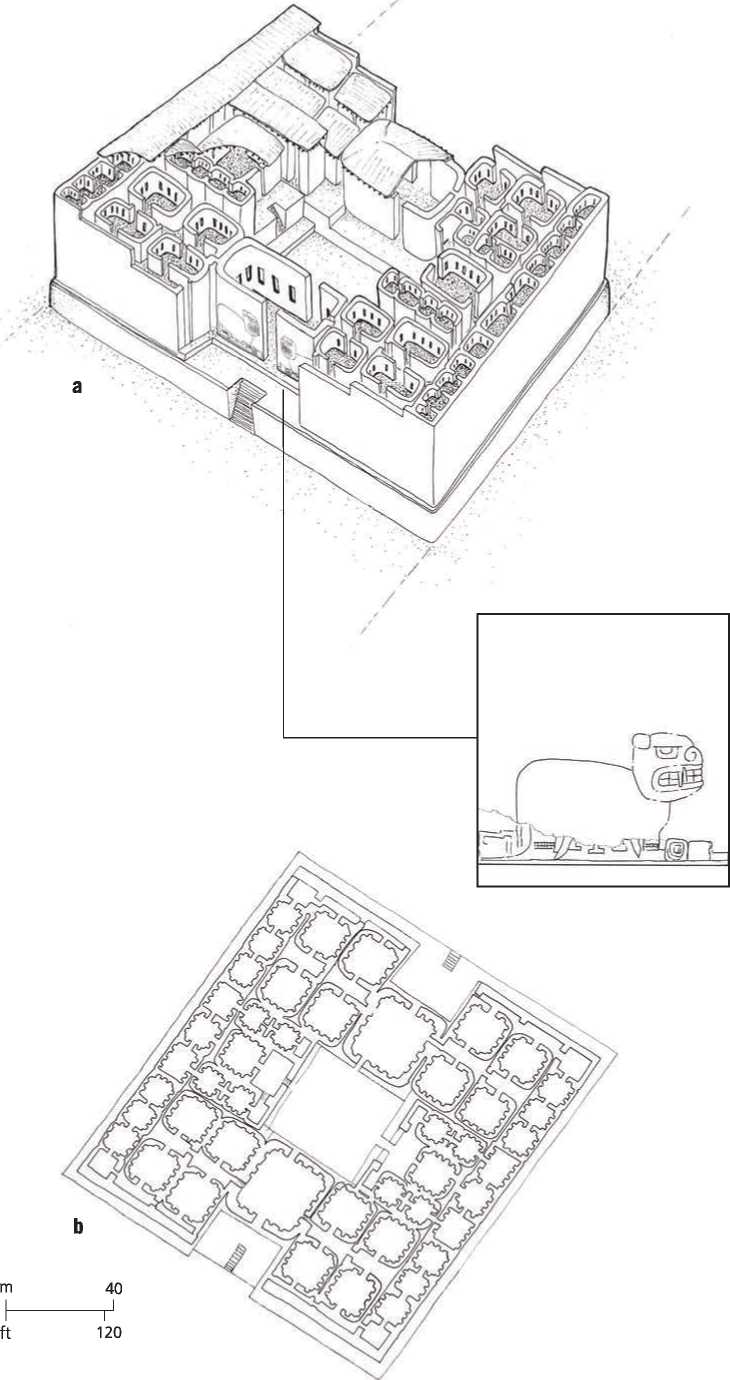 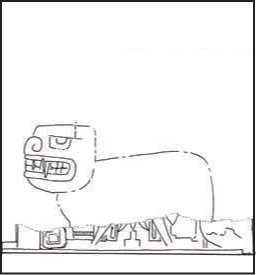 There is also a substantial increase in the elevation of room floors as one moves away from the center. The floors of the corner rooms are 4 meters higher than the floor of the central court. In that sense the building, though ofl:en referred to as “a mound”—this because of the ruinous state in which it was found—is most deflnitely not a mound, but the opposite. It is a bow-shaped platform with rooms on it. There can be no doubt that the rooms held important commodities, since access to the various rooms was regulated by wooden gates and bar closures. Nor are the rooms freely interconnected. For example, most of the large square rooms are accessible only from the two large entrance lobbies. Similarly, one can get to the smaller rooms only through a carefully designed system of corridors. The rooms have niches that were covered with mortar and white plaster. These niches vary in size from 85 by 39 centimeters to 175 by 69 centimeters.

The building was clearly meant to impress. Ascending the central staircase, one enters an atrium and is immediately confronted by an enormous frieze of a pair of felines, 10 meters long and about 6 meters tall, facing each other across the entrance. The three-dimensional aspect of the animals would have been enhanced by the curvature of the atrium’s walls. A low bench, 120 centimeters wide and 25 centimeters high, further accentuates the frieze and may have served as a barrier to discourage too close an approach.

It seems that the building was a sacred storehouse, given that the remains of variety of plant foods such as peanuts, beans, and tubers were found in the niches. But other items that were found include turquoise beads, a whole jet mirror, a wooden flgurine, and flnely made textiles, meaning that it might have been used for commodities of all sorts and not just food. This means that the building was probably the focal point for the bureaucratic activities of collecting and redistributing food and crafl: items. The axial relationship between this building and Moxeke also means that just as the one was the center of ceremonial activities, this one was the physical and representational center of the site’s agricultural wealth designed to make a clear statement in the new world of agricultural production.24

Recent excavations there have revealed the presence of a rectangular construction (45 by 18 meters) within which there is an I-shaped court that is architecturally very similar to prehistoric I-shaped ball courts commonly found in Mesoamerica. But since rubber and indeed ball gaming structures are totally absent from Peruvian architecture, it was most likely not a ball court. It seems much more probable that it housed special religious or secular activity relating to Huaca A. It might have been, for example, a place where goods were collected.25 Another nearby center was the seaside settlement of Las Haladas, which under the influence of Casma Valley quickly changed from a large pre-ceramic village into a major ceremonial center in its own right. Whether it was a maritime outpost of one of the Casma centers or more independent is not known.