Aerial photography is widely used in archaeological prospection due to its potential to recognize site locations, record and monitor changes of their landscapes through time, and even discover subsurface features by means of the topsoil characteristics or by stereoscopic examination of images (Figure 7). Inspection of low altitude oblique and vertical photographs can detect textural variations in soil, such as shadow marks, crop marks, and soil marks, most of which are caused by the disturbances of the soil’s matrix by the presence of underground features and the corresponding differences in moisture conditions. Conventional and infrared aerial photography conducted by manned or unmanned airborne platforms, kites and tethered balloons has played a critical role in site reconnaissance. Re-evaluation of old satellite imagery (Corona keyhole or KVR-1000), prior to the recent changes of the landform and the terrain by the modern cultivation practices and technical works, has helped the detection of sites.

Satellite systems, recording the surface attributes in the visible and nonvisible parts of the electromagnetic spectrum, had a major impact on the regional archaeological studies. Multispectral imagery is particularly useful in scanning areas of different spectral signatures and tracing features of extended dimensions. Space-borne radar sensors (such as space shuttle SIR-C/X-SAR, radarsat and envisat radar altimeter) have been applied in the past and are increasingly

Figure 6 Presentation of geophysical data is vital for the final interpretation of them by both geophysicists and archaeologists. The particular example indicates the gray scale map (left) of the magnetic data from ancient Dodoni, Greece, the corresponding 3D shaded relief map (middle) and the diagrammatic interpretation of the magnetic anomalies (right) registered to the topographic layout of the site through GIS techniques.

Figure 7 Left: High-resolution satellite images provided by Google Earth (earth. google. com). Above, an image of the geoglyphs of Nasca, located at Perou (500 BC-AD 500). Below, an image of the Qal’at al-Bahrain multiphase tell (2300 BC-1500 AD), capital of the Dilmun, on the top of which a Portuguese fort was built. Right: Time series of low-altitude aerial images of the fortification of Ali-Pasa in Epirus, Greece, indicating the change of landscape through time. 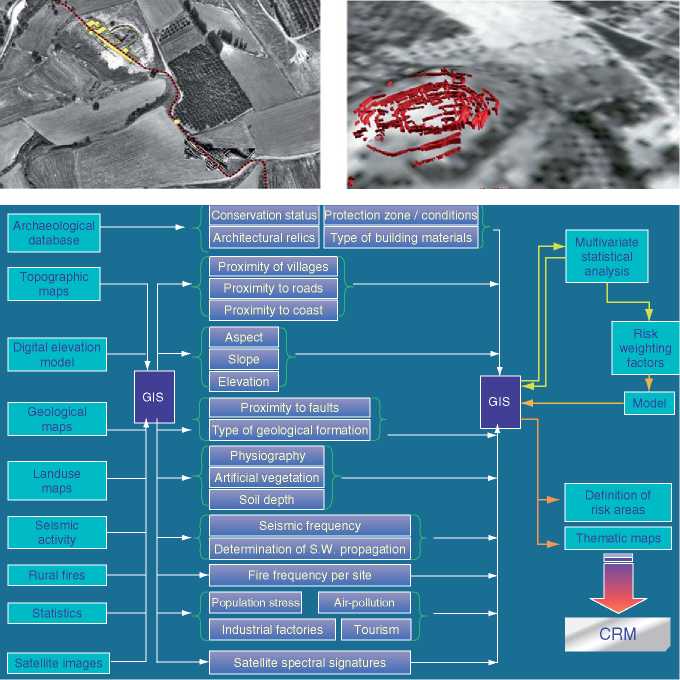 Figure 8 The recent trends in remote-sensing consider a cohesion of different technological means. Results of geophysical surveys can be used as a verification of GIS modeling (top left: study of the fortification outline of Palaepaphos, Cyprus) or even for constructing VR models (top right: study of the Neolithic/Mycenaean settlement of Dimini, Greece). At the final stage, the integration of diverse information through GIS can lead toward a CRM model in a regional scale.

The spatial and spectral resolutions of the recording sensors remain key issues in satellite remote sensing, especially in recognizing the ‘signatures’ of the suspected targets. Recently, the launching of hyperspectral systems (such as ASTER and Hyperion) comprising tens to hundreds of bands or high spatial resolution (<3m) satellites (such as SPOT5, Ikonos, Quickbird, Eros, Formosat, and Orbview) has upgraded the quality of the satellite images. Satellite remote sensing has been applied for mapping sites and prehistoric agricultural fields, detection of ancient irrigation ditches, studies of regional settlement, and adaptation patterns, CRM, etc. The current dissemination of satellite imagery through internet portals, such as Google Earth, is also expected to have a major impact in archaeological studies and management of cultural resources (Figure 7).

At the same time, GIS is increasingly upgrading its role in archaeological prospection due to its ability in integrating diverse geographic datasets and contributing to the management of cultural monuments (Figure 8). Multivariable statistical analysis on GIS, based on the geographical elements of the terrain (proximity to water and raw resources, elevation and aspect, slope, transportation corridors, sight analysis, etc.), can contribute in site catchment analysis, settlement pattern modeling, and in constructing predictive models for locating areas of potential archaeological interest in combination to satellite imagery.

Geophysical method. Experimentation with new methods and arrays (such as 3D seismic and ERT, SQUID magnetometers with resolution of less than 0.00005 nT, capacitance coupling and induced polarization techniques, and thermal sensing) may also introduce other nonintrusive exploration techniques. High-resolution hyperspectral sensors (such as the compact airborne spectrographic imager (CASI)), will also enhance the regional coverage of archaeologically sensitive regions.

Issues such as neural networks, virtual reality interfaces, and artificial intelligence have been continuously enhancing the latest developments of GIS technology. Environmental pressures and natural disasters will demand an increasing fusion and cohesion of the above technologies aiming toward the finer exploration and management of cultural heritage.