THE JEWS IN THE WORED SYSTEM

To further understand the Jewish population change over the last several decades, the intensive and manifold relationships that exist between Jewish communities and contemporary society at large deserve closer scrutiny. One needs to relate the Jewish presence—as expressed in absolute numbers and as a percentage of the total population—to major social and economic indicators of the places where they live at the country, regional and provincial level. Did Jews simply move and redistribute at random, or did their mobility patterns reflect the pull and push of the main social forces in the larger market?

Three sets of data provide at least a partial answer. The geographical distribution of Jews is examined between 1990 and 2001 at the level of detail, respectively, of 190 countries globally, about 70 different economic regions within the European Union, and the United States. The Jewish and total populations of these countries, economic regions, and states were ranked in relation to the degree of economic development in each area. Geographical units were first sorted according to socioeconomic indicators, and then subdivided into five groups (quintiles), each with the same number of geographical units.

The different concentration of the Jewish presence out of the total population, by level of development of the environment, tended to be very consistent and statistically significant, passing from comparatively denser in the wealthier and more sophisticated areas to scantiest in the poorest and more back- 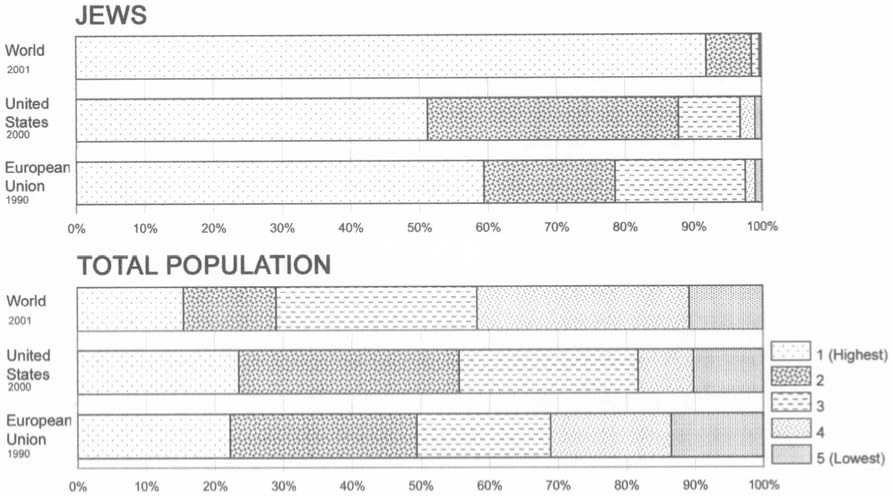 Total and Jewish population distribution, by socioeconomic development of regions of residence.

1,000 of the total population, but twice as many in the top quintile of states.

The concentration of Jews in the better locations, and Jewish-total population distribution differences were far greater among countries worldwide (76.4 percent) than among in the United States (32.2 percent). Over time, the more powerful locales were able to draw Jews from the weaker ones through international or internal migration. The inherent logic connecting the presence of Jews with the availability of certain basic socioeconomic and cultural conditions locally seemed to be quite the same, regardless of the geographical level chosen for analysis. A Jewish population that tended to be generally urban, highly educated, and quite specialized in its professional activities displayed awareness of the changing map of opportunities. But the data can also be interpreted as an indication of growing material and functional dependency of the Jewish presence on the general situation of society at large, whose major changes generally were far beyond the control of the Jewish community.