Although the first century of the Portuguese presence in Angola had been characterized by an aggressive policy of territorial expansion and political interference with Angola’s neighbors, by the late seventeenth century these options were no longer available. Strong opponents, such as the kingdoms of Kasanje, Matamba-Ndongo, and Kongo had halted further expansion. Although Angola was primarily an exporter of slaves, it no longer obtained the slaves by direct capture as it had during most of the seventeenth century.

The only exception to this pattern was in the south, in the land behind the small outlying colony of Benguela. Founded in 1617, Benguela had not been as aggressive as the main colony, and during most of the seventeenth century had acted as more of a trading post than military base. In 1682, however, Benguela became involved in the politics of the central highlands with the establishment of a new fort at Caconda, and sent a number of expeditionary forces into the region between about 1715 and 1725. These, however, did not result in any further conquests.

Military policy in Angola focused largely on gaining control of the trade industry, both in order to tax it efficiently and to prevent it from being appropriated by nonPortuguese shippers. Policy changes in Lisbon freed governors’ salaries from the slave trade, both reducing their incentive to conduct war and increasing their desire to control trade. Dutch merchants had been particularly problematic in the seventeenth century, especially those fixed along what Angolans called the “North Coast,” the coast of Kongo and the smaller states north of the Zaire River. In the eighteenth century French and English merchants joined them, encouraging trade to their ports across Kongo. Many Angolan merchants, anxious to avoid taxes and with long-established contacts in Kongo were willing to ship slaves to the northern regions—even from the heart of Angola itself. 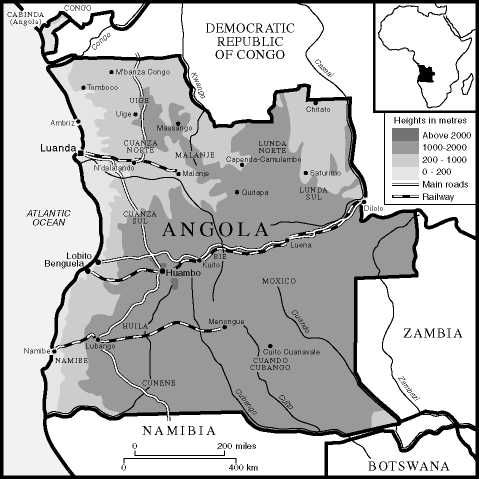 
Beginning especially after the Dutch were expelled from Angola in 1641, Brazilian commercial interests became more pronounced in Angola. Angola remained a major center for the slave trade, and much of its formal export trade was directed to Brazil. Merchant houses from Brazilian cities set themselves up in Luanda and even in the hinterland, competing with Portuguese interests, even as the governors and bishops were increasingly drawn from Brazil. In many respects, Angola was a subcolony of Brazil within the Portuguese empire.

For much of the early eighteenth century, Angola governors did not feel capable of enforcing their power fully, but dreamed of constructing posts and forts at key points on the “North Coast” in the “Dembos” regions and in the central highlands to channel all the trade to the coast. Military and financial resources to carry out such plans were lacking, however, and they had the often active resistance of Angolan settlers and the local allied African rulers who enjoyed the freedom of trade that Portuguese laxity allowed them.

The Portuguese government and army rested on a combination of resident settlers and alliances with local sobas (African rulers) who supplied troops for wars and porters for trade as part of their tribute arrangements. The Portuguese settlers were primarily landowners, whose estates were located along the Dande, Bengo, and Kwanza-Lukala rivers, and shipped a host of agricultural goods to Luanda to feed the hordes of slaves being exported from the colony. Provisioning the 10,000 to 15,000 slaves that passed through the city every year provided ample markets for this produce. In addition to agriculture, they or their agents, typically trusted slaves or clients called pombeiros, were engaged in trade, traveling to markets far from Angola (since the government banned whites from going into the interior). Settlers often married into the families of the sobas, and in many respects the rights and legal positions of the two groups became blurred. Equally frequently, the cultures of the two groups blended as well, Kimbundu being the most frequently spoken home language of settler and soba alike, while both also claimed competence in Portuguese. Christianity, the universal religion of all groups, included an ample mixture of elements from the Mbundu culture of the colony.

In the mid-eighteenth century the fortunes of the colony shifted, particularly as the Lunda empire, which had emerged in central Africa in the earlier eighteenth century sent armies to conquer the areas around the Kwango, disturbing political relations and sending thousands of slaves westward to the Atlantic ports. In addition, more powerful states came into being in the central highlands, especially Viye, Mbailundu, and Wambu. At this time, a new and aggressive governor, Francisco Innocenzo de Sousa Coutinho, arrived in Angola.

Sousa Coutinho and his successors sought to enforce more vigorous policies. He hoped to reunite Angola with Portugal and favor Portuguese interests against those of Brazil. Portuguese merchants arrived in the country in larger numbers, and the plans for new fiscal management were revived. He completed a new fort at Encoge intended to stop illegal trade across the Dembos, moved the fort at Caconda from the foothills of the central highlands to the heart of the highlands, opened an iron works, created a salt monopoly and many other programs intended to promote local industry and fiscal obedience. Later governors were equally aggressive, seeking to force the kingdoms of the central highlands into submission, and launching military campaigns to attempt to subdue the southern Kongo districts accused of supporting smuggling, and even far away Cabinda. At the same time they also sought to reinstate Portuguese culture and eliminate what they considered non-Christian elements from local religion.

In the end the more ambitious of the plans failed to achieve their objectives, being beyond the capabilities of the colony. Military campaigns proved expensive and disruptive, the forts were too difficult to supply against determined resistance, and even the large haul of captives for enslavements was impossible. Angola remained essentially one of several trading posts managing a sizable agricultural population that Portugal only partially controlled. Real control would await the last half of the nineteenth century.

Birmingham, David. Trade and Conflict in Angola: The Mbundu and Their Neighbours under the Influence of the Portuguese, 1483-1790. Oxford, 1966.