The Sokoto caliphate was situated mostly in present-day northern Nigeria and parts of southern Niger. It was founded as a result of the Fulani jihads (holy wars) in the first decades of the nineteenth century. By 1808 the Hausa states had been conquered, although the ruling dynasties retreated to the frontiers and built walled cities that remained independent. The more important of these independent cities included Abuja, where the ousted Zaria dynasty fled; Argungu, in the north, the new home of the Kebbi rulers; and Maradi, in present-day Niger, the retreat of the Katsina dynasty. Although 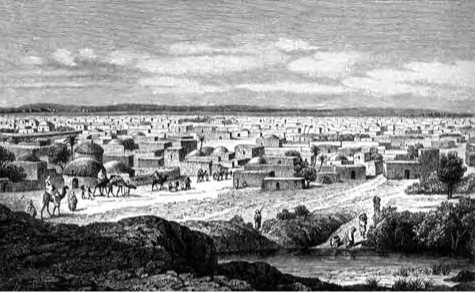 
The Borno mai was overthrown and Birni Gazargamu destroyed, Borno did not succumb. The reason, primarily, was that a cleric, Al Kanemi, fashioned a strong resistance that eventually forced those Fulani in Borno to retreat west and south. In the end, Al Kanemi overthrew the centuries-old Sayfawa Dynasty of Borno and established his own lineage as the new ruling house.

The new state that arose during ‘Uthman dan Fodio’s jihad came to be known as the Sokoto Caliphate, named after his capital at Sokoto, founded in 1809. The caliphate was a loose confederation of emirates that recognized the suzerainty of the commander of the faithful, the sultan. A dispute between Muhammad Bello and his uncle, Abdullahi, resulted in a nominal division of the caliphate into eastern and western divisions in 1812, although the supreme authority of Bello as caliph was upheld. The division was institutionalized through the creation of a twin capital at Gwandu, which was responsible for the western emirates as far as modern Burkina Faso and initially as far west as Massina in modern Mali. When ‘Uthman dan Fodio died in 1817, he was succeeded by his son, Bello. The eastern emirates were more numerous and larger than the western ones, which reinforced the primacy of the caliph at Sokoto.

The allegiance sworn by Fulani elites and recognized by the caliph in the form of sending flags, as symbols of recognized powers and rights, constituted the elementary framework of the caliphate’s leadership. It was these families that were to provide the Fulani aristocracy of the different emirates. The system of Wazirs, who served as a direct link between the caliph and the emirates, was initiated by ‘Uthman dan Fodio already during his reign. Regular correspondence between the caliph and the emirates enabled a relatively unified policy for most of the century.

By the middle of the nineteenth century, there were 30 emirates and the capital district of Sokoto, which itself was a large and populous territory although technically not an emirate. All the important Hausa emirates, including Kano, the wealthiest and most populous, were directly under Sokoto’s administration. Adamawa, in present day Cameroon, which was established by Fulani forced to evacuate Borno, was geographically the biggest, stretching far to the south and east of its capital at Yola. The influence of the caliphate reached the southern bank of the Niger when Ilorin became part of it in the 1830s. It was the Yoruba Oyo’s cavalry, based in Ilorin and largely composed of Muslim slaves, that initiated this move when it swore allegiance to Sokoto following a series of internal clashes after 1817.

The caliphate remained divided into two major parts: former Islamic lands, composed mostly of Hausaland, and those lands on the peripheries that did not have an Islamic tradition, thus making their integration into the caliphate more difficult. As a result of the jihad, Islam was entrenched in Hausaland in the form of the Shari’a’s introduction. However, the former Hausa society never fully abandoned its earlier approach to religion. The frontier states of Bauchi or Adamawa, for example, presented continuous problems up to the 1850s. An additional persisting internal problem of the caliphate was succession disputes. Although these were most often settled in the emirates themselves, there were open revolts defying the caliph’s authority in Kano, for example.

Recent research, especially by Paul Lovejoy and Jan Hogendorn (1993), has called attention to slavery. Unlike in the earlier history of the region, when slaves were often used as currency, they now played an increasingly important role in the economic production of the caliphate. The percentage of slaves in the total population in several states was estimated at around 50 per cent by several European travelers, such as

Clapperton and Barth in the 1850s. It is estimated that by the 1890s the largest slave population of the world, about two million people, was concentrated in the territories of the Sokoto Caliphate. The use of slave labor was extensive, especially in agriculture. The growth of small plantations (rinji) occurred around the newly established core cities and commercial centers, like Zaria, Kano, and Gwandu. In the later period of the caliphate, slave settlements (tungazi) were established in Nupe, a phenomenon that attracted much attention from European visitors and traders and would eventually provide the casus belli for European conquest starting in 1897. While the rinji functioned as a small, private owned estate, the tungazi concentrated a dense population in small region of scattered villages. The agricultural sector produced goods like sorghum, millet, and shea butter. The most important aspect of the caliphate’s economy was, however, its textile industry, also based on the slave labor of cotton plantations. In addition, the salt and livestock trades became more prominent by the late nineteenth century.

‘Uthman dan Fodio’s jihad created the largest empire in Africa since the fall of Songhai in 1591. By the middle of the nineteenth century, when the Sokoto Caliphate was at its greatest extent, it stretched 1,500 kilometers, from Dori in modern Burkina Faso to southern Adamawa in Cameroon. In present-day Nigeria, it covered the Nupe lands, Ilorin in northern Yorubaland, and much of the Benue River Valley. The jihad, and subsequently the states of the Sokoto Caliphate, influenced the political and social development of the region significantly. In addition, ‘Uthman dan Fodio’s jihad provided the inspiration for a series of related holy wars in other parts of the savanna and the Sahel that led to the foundation of Islamic states in Senegal, Mali, Cote d’Ivoire, Chad, the Central African Republic, and Sudan. The immediate states of the caliphate functioned as the most important polities in the nineteenth century and played a major economic role in agriculture, the labor movement, and the reinstitutionalization of slavery. They were also a key element in the arguments of the British for conquering the caliphate in the first years of the twentieth century.

Slavery: The Course of Abolition in Northern Nigeria,