The importance of salt in the history of the Sahara cannot be overestimated. It has been variously responsible for the growth of cities and the rise and fall of more than one empire, and a central component in the gold and slave trades as well as a vital element in the spread of Islam south and west across the continent. A daily intake of salt is as essential for life as is water; without either people cannot live more than a very few days. For the hunter-gatherer, whose diet contained significant quantities of meat and/or fish, the ingestion of additional salt was not necessary, as animals’ flesh contains a sufficiency of sodium chloride. With the movement toward more sedentary lifestyles, made possible with the advent of crop cultivation, farmers had reduced access to meat and so a need arose for alternative sources of salt.

Salt has been produced in the Sahara for at least 2,500 years and, despite the lack of archaeological evidence to substantiate the claim, salt production is thought to significantly predate this. Such production has also always been widespread across the Sahara, and centers of production can be found from Mauritania to Sudan. The two major methods of production are mining and evaporation (both natural and artificial), which tend to occur in mutual exclusivity of one another. The widespread availability of salt across the Sahara has meant that since the demand existed, initially from the forests and savanna to the south where it was not readily available, there has been a need to produce it.

Where possible, salt is always first produced through mining; this is only possible if the salt is present in sufficient quantities and of the right constitution. The reason for the preeminence of mining is twofold: first, digging slabs of salt directly from the earth is by far the easiest means of production, and second, rock salt is of a higher quality than other kinds of salt (e. g. those produced through evaporation). There are even instances where coastal dwellers who had the means of processing salt through evaporation did instead pay for the importation of rock salt. A number of salt mines are justly famous for their antiquity and size. The earliest salt mine for which definite records exist is Idjil, in Mauritania, which has been active since at least the eighth century. Of equal renown is Taghaza, Mali, described by Ibn Battuta as an established center of 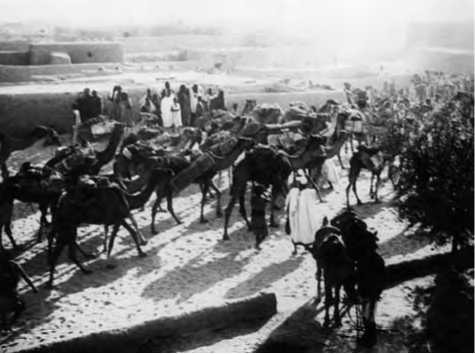 Salt production by the mid-fourteenth century. The huts and the mosque of the settlement were, he notes, all made from blocks of salt. The town was destroyed in the sixteenth century and replaced by Taoudenni, in the same area to the north of Timbuktu, as the region’s leading salt producer.

Evaporation is the other method of salt production widely employed across the Sahara. In several locations (for instance, Bilma, Niger) this is achieved through the “farming” of natural salt pans—large, circular briny depressions from which the salt is harvested as it is left behind following solar evaporation. Where such pans are not present other methods have been developed. In Manga, Niger, and Darfur, Sudan, evaporation takes place in conjunction with the filtration of salineladen earth through ash. This residue is then subjected to partial evaporation and the remaining brine is boiled. This method of production is the least favored both because of the need for fuel (a scarcity in the desert) to aid the evaporation process and because the end product is of a generally poor quality.

Due to the impossibility of life without it, there is little doubt that salt was one of the earliest goods traded in and across the Sahara. Although as the trade developed it became instrumental in the growth of empires, it was also active on a small-scale local level, with individuals traveling relatively short distances in order to collect or produce as much as they required for their own use. Although archaeological evidence of the early salt trade is hard to come by, a 2,500-year-old account from Herodotus talks about the existence of a 450-mile “salt road” that connected the salt mines to the trading center at Timbuktu, that place in the Western imagination that marked the end of the known world and was known, if at all, through the stories of its unparalleled wealth.

The variety of goods that moved along the trade routes and were exchanged for salt is staggering: cowrie shells, ostrich feathers, glass, kola nuts, slaves, and gold. Prices that could be charged may seem hard to believe, and perhaps there is an element of hyperbole in some of the travelers’ tales, such as salt being exchanged weight for weight with gold, but then again perhaps not. The introduction of the camel to the region had an enormous impact on the trade scene, with the distances that could now be traversed growing considerably. With a substantial increase in trading activity, a number of urban centers grew where previously there had just been a regular water supply.

Although other factors also had a role, the salt trade was at least partially responsible for the rise of such empires such as Ghana, Mandingo (Mali), and Songhai. Ghana established itself as being of some regional importance in about 650, and in its early history the rulers of the state decided to impose a tax on goods that passed through its territory, of which salt was one of the largest. The decision to charge a transit tax, which was only made when they felt strong enough to enforce it, quickly made them both rich and unpopular with merchants who, however, had little choice but to pay it. The Mandingo empire, which rose to prominence at the start of the thirteenth century, managed to do so by controlling the salt trade from Taghaza. In the Songhay Empire (c. 1450-1590) salt was used for currency, resulting in the location of the salt mines being the kingdom’s most jealously guarded secret. And in spite of the rise and fall of these individual kingdoms the importance of the salt trade itself was hardly diminished until well into the twentieth century, when various technologies conspired to overrun the ancient ways.