JOHN DILLINGER’S LIFE OF CRIME DIDN’T GET off to an auspicious start. By 1924, he was a hard-partying high school dropout who’d deserted the navy, so he drunkenly took part in a botched $50 robbery of a Mooresville, Indiana, grocer. Thinking leniency was in the offing, Dillinger pleaded guilty, only to be handed a ten - to twenty-year sentence. Inside the prison walls, Dillinger made friends with similar interests, the most important of whom would mentor the malleable young crook in the fine art of bank robbery.

Dillinger would go from petty crook to master criminal, learning from the seasoned veteran “Handsome” Harry Pierpont, a quiet leader who brought together Indiana State Prison’s finest, a Depression-era “Legion of Doom,” bound together through a shared love of stealing money. Pierpont was a disciple of the “father of modern bank robbery,” Herman Lamm. The German bank robber preached the importance of precision, of meticulously casing the bank beforehand, understanding its layout, knowing who had access to the vaults, and mapping out multiple escape routes. And, as in all great productions, everything was rehearsed until the ensemble was rock-solid ready. Lamm’s system provided the blueprint for the Dillinger gang’s epic spree. (Ironic that all of the sophisticated criminal minds met behind bars.)

First, though, they had to bust out. Pierpont was a prisoner’s prisoner, respected for his ability to withstand a beating and his dedication to jailbreaks. When Dillinger was paroled in May 1933, one of the great big house escapes in American history was already underway. Pierpont (and the rest of his gang) gave Dillinger a list of the easiest banks and stores to rob and provided him reliable accomplices to aid in their cause: freedom. Dillinger spent that summer raising funds to get his boys out of the hoosegow. He and his new pals on the outside looted tens of thousands of dollars for briberies, a safe house, and guns and ammunition, which were snuck into the prison’s shirt factory in a barrel of thread. The guns that Dillinger bought were used by Pierpont and crew to escape on September 26, 1933. Hostages, taken from the factory, slowly walked them across the yard, telling guards at the gates that the prisoners had guns and would shoot to kill. One guard resisted and took a severe beating, but for the most part, the plan came together.

The only rub was that in the days before the prisoners flew the coop, Dillinger had gotten locked up again in Lima, Ohio, so Pierpont simply returned the favor on October 12. In the act of busting Dillinger out, Pierpont and criminal cohort Fat Charley Makley killed Sheriff Jess Sarber. That murder kicked off one of America’s wildest crime sprees, a rolling fury of tommy guns and the eight-cylinder Essex Terraplane for speedy getaways, enabling the Dillinger gang to knock off banks, much to the public’s delight. A quiet type, Pierpont wasn’t a publicity seeker; he let Dillinger become the face of the gang, a. k.a. Public Enemy No. 1.

The gang armed itself by emptying a police arsenal in Peru, Indiana. (Local cops showed two of the gang members, posing as tourists, where the stockpile of weapons was.) Famously, while hitting their first bank in late October, Dillinger refused to take a farmer’s cash. The gang’s Robin Hood ethos made them folk heroes, and the $75,000 they walked out with made them rich. Pierpont would later say,

“I stole from the bankers who stole from the people,” a sentiment that went over well in the poverty-stricken times and wouldn’t sound out of place at a Tea Party rally or an Occupy Wall Street conclave today. Everyone hates “the man.”

After a few successful bank jobs, the crew went to Tucson, Arizona, to hide out. Like a lot of criminals flush with cash, they got careless and were arrested, one by one, in January 1934.

Dillinger had one more escape in him—he successfully brandished a fake wooden gun—but on July 22 he’d be violently rubbed out by the FBI after taking in the film Manhattan Melodrama at Chicago’s Biograph Theater.

Pierpont and Makley tried a similar trick, using phony pistols carved out of soap and painted black with shoe polish, but they failed. Guards killed Makley; Pierpont survived, barely. He’d already been sentenced to death for Sheriff Sarber’s murder, so his paralyzed body had to be carried to the electric chair. No word on whether Pierpont shed a tear for his apprentice. He uttered no last words on October 17 as two thousand volts from “Old Sparky” spread through his body. 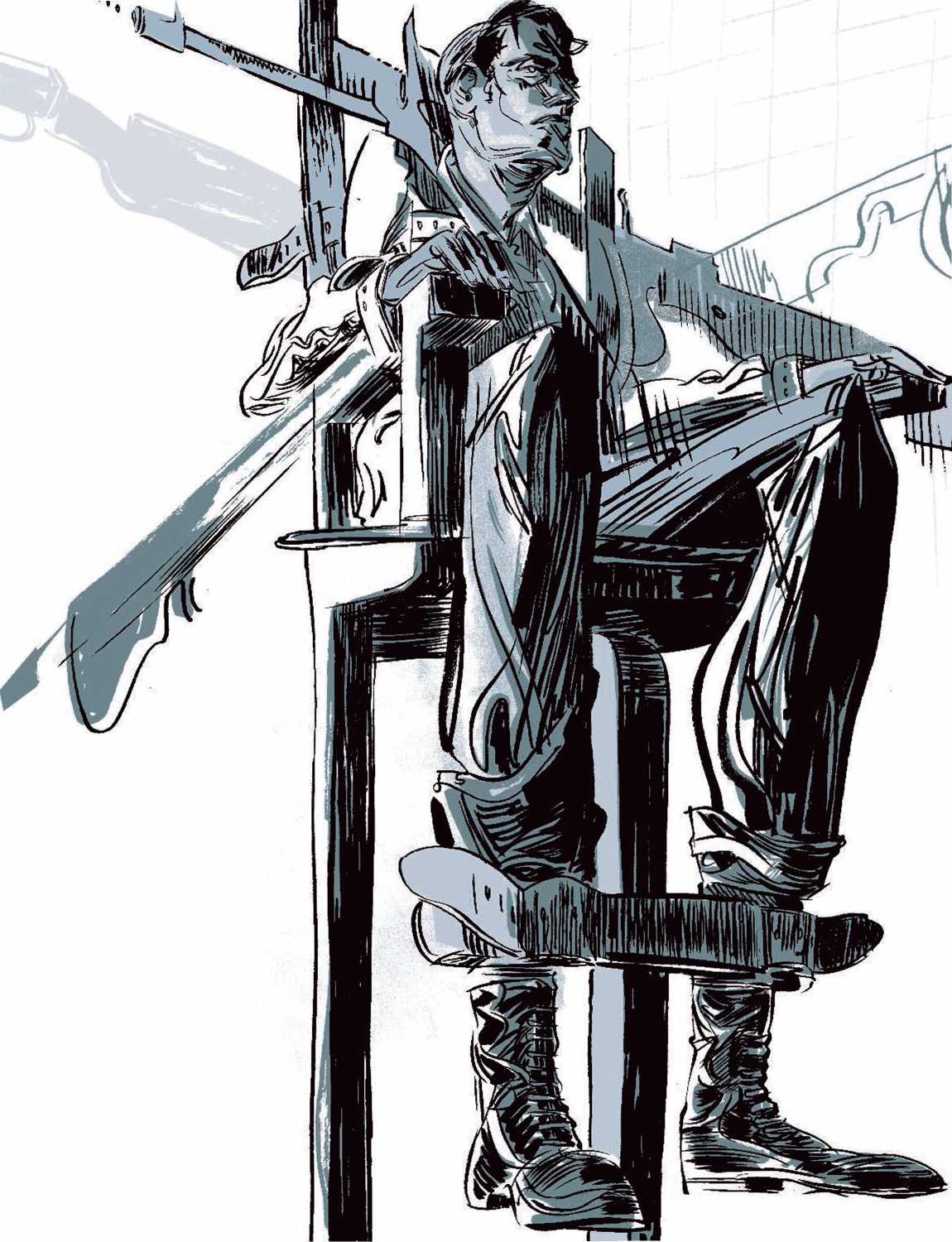