Under the Habsburgs, Spain’s policy toward its colonies could almost be described as one of abandon. Centuries of inertia on the part of the monarchy had resulted in the colonies enjoying a high degree of autonomy. It was Charles III (1759-1788), a member of the Bourbon dynasty that had taken hold of Spain’s destiny, replacing the Habsburgs in the wake of the Spanish War of Succession (1702-1713), who changed all of that. Determined to impose his own brand of enlightened despotism, Charles III energetically set about reforming his domains, determined to encourage social and agricultural improvement while tightening his administration’s control over the empire. he changes he promoted, the so-called Bourbon reforms, resulted in acute discontent in the colonies and included a determined assault on church wealth and privileges. In a bid to wrest power away from priests who were deemed to be reactionary or who obeyed the Pope rather than the Crown, Charles III implemented a range of anticlerical legislation.

One specific decree that had strong repercussions in the collective imagination of Spanish America was the expulsion of the Jesuits in 1767. Over 2,500 Jesuits, most of them criollos (white Spanish Americans of Spanish descent) were forced to abandon their homelands. hese exiles were the individuals who began the intellectual process of defining the particularity of the oppressed nations they had been forced to leave. Ostracized in Europe, the criollo Jesuits pined for their homelands and, to start with, reminisced about their favorite dishes, craved for the fresh spring water of their province’s mountains, and begged the king to allow them to die in their homelands. However, it was not long before their writings

acquired a political dimension as they began to refute the views generally accepted in Europe that the New World was an inferior continent. European philosophers and scientists such as Georges-Louis Leclerc de Buffon, Guillaume-homas Raynal, William Robertson, and Corneille de Pauw were arguing that the animals, plants, and even the people of the Americas were inferior to their European equivalents. he exiled Jesuits’ response was to write works of outstanding scholarship that defended their homelands’ geography and history. It was the fi rst and clearest expression of something that could be described as national pride. In the case of Mexico, Francisco Xavier Clavigero played a fundamental role in initiating a process of national reappraisal that soon caught the imagination of Europe as well as the Americas. Exiled in Italy, he wrote his Ancient History of Mexico (1780-1781), which he described as “a history of Mexico written by a Mexican.” It was not long before the exiled Jesuits’ works inspired other criollo intellectuals to challenge European prejudices.

In Mexico City, Antonio de Leon y Gama (1735-1802), a criollo professor of scholastic theology, used the discovery of two pre-Hispanic monoliths to demonstrate that, contrary to the views espoused by European philosophers, the pre-Columbian Indian nation was a truly advanced society. One of these monoliths was the huge stone representing the monstrous goddess Coatlicue. he other was the great disc carved with the glyphs of a calendar, the piedra de sol (sun stone), which, partly thanks to Leon y Gama’s Historical and Chronological Description of Two Stones (1792), was to become an acclaimed monument, an enduring emblem of Mexico, and the most dramatic proof that the Indian peoples of pre-Cortesian Mexico had forged a civilization comparable to that of ancient Greece or Rome.

With this emergent Creole (criollo) patriotism came a vigorous attempt to rescue the Indian past of the continent. In Mexico, home to the Aztecs and the Mayas, Creole patriotism acquired a particularly strong indigenista (Indianist) streak. At a political level, this orientation became a means to condemn everything Spain had brought to the Americas. Regardless of the fact that the main

The origins of Mexican nationalism are to be found in Creole patriotism. The Creoles (cri-ollos) were the white descendants of the Spaniards who, having been born in Mexico, were discriminated against by the Spanish Crown, in particular during the latter half of the 18th century. Unable to rise in the colonial political hierarchy for the simple reason that they had been born in the Americas, it was the Creole intelligentsia who first formulated a proto-nationalist discourse. Intellectuals such as Francisco Xavier Clavigero, Antonio de Leon y Gama, and Servando Teresa de Mier developed a view of nationhood that distinguished the nascent Mexican nation from Spain by highlighting the Aztec past of "their” forebears, and the foundational myth of the Virgin of Guadalupe. Creole patriotism would become a powerful creed after the War of Independence erupted in 1810.

Proponents of Creole patriotism were Creoles of Spanish descent, political writers, such as Father Servando Teresa de Mier and later Carlos Marfa de Bustamante, argued that the Spanish conquest of the Americas had resulted in 300 years of oppression and that it was their duty to renew the struggle of the Aztecs where it had been left off—with the execution of the last Aztec emperor, Cuauhtemoc, in 1521. hey even found a way of refuting the view that the Spaniards were responsible for bringing Christianity to Mexico. hey argued that the white-bearded god Quetzalcoatl was none other than the apostle Saint homas and that, therefore, the Aztecs were Christians before the Spaniards arrived. he Aztecs’ cannibalism was explained as a particularly literal interpretation of the Holy Communion, eating Christ’s body, drinking Christ’s blood. he Spaniards had corrected the Aztecs’ liturgy, but they had not evangelized the Americas. Needless to say, the Creoles’ indigenismo was strictly historical. hey regarded their contemporary Indians with as much contempt as the Spaniards did. Nonetheless, however contradictory their emergent nationalism was, their condemnation of everything Spanish and their affirmation of an emergent national identity that had its roots in preconquest America became a very powerful creed after the Wars of Independence erupted.

For many Mexican nationalists of the 19th and even 20th centuries, the Aztec inheritance became an integral and fundamental part of nationhood. It was what distinguished them from other Spanish American nations. It also distinguished Mexico from the United States. And the argument that Mexico had existed as a nation before the conquest in 1521 was critical in undermining the legitimacy of Spanish rule.

Having said this, the contradictions that clearly figured in the writings of Creole patriots such as Carlos Marfa de Bustamante would keep this version of Mexican national identity from becoming hegemonic. In fact, for the greater part of the 19th century, there was not one single national idea that might have been seen as dominant. Political writers and historians such as conservative ideologue Lucas Alaman (1792-1853) and liberal thinker Jose Marfa Luis Mora (1794-1850) saw in Hernan Cortes the true father of the Mexican family and rejected the indigenista interpretation of Mexican identity. For them, the real foundations of their nation had been set during the colonial era. he conquest was what had led to this Roman Catholic, Spanish-speaking nation. Although Alaman played a key role in helping salvage and restore many of the Aztec antiquities that can be found today in the Anthropology Museum of Mexico City, he had little time for his contemporary Indians. he importance he gave to the Spanish legacy, moreover, would be shared by many of his contemporaries. Hispanophilia would become particularly prominent following the Mexican-American War (1846-1848), and again 50 years later, following the U. S. involvement in the Cuban War of Independence in 1898. Faced with the threat of U. S. expansionism, many Mexicans rejected their American affinities by emphasizing their Spanish and, by default, European heritage. 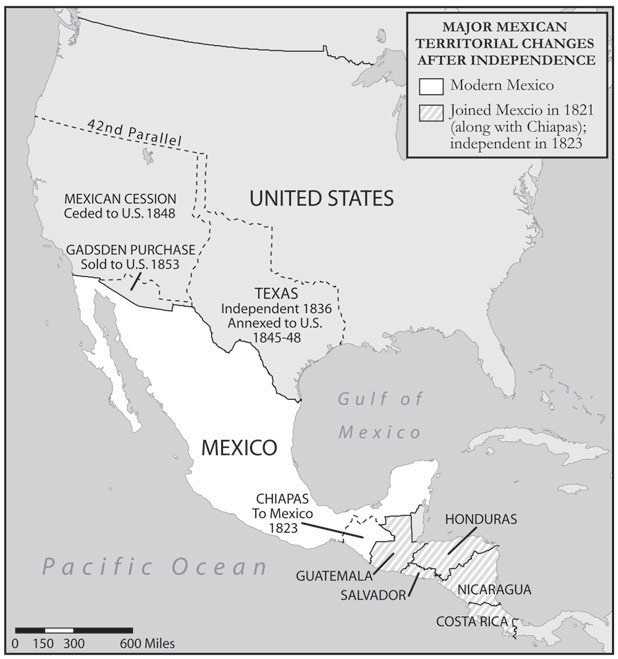 He Mexicans’ real and imagined bonds with Spain and the United States were, and still are, recurrent themes in most deti nitions of Mexican identity. In both instances, there was always a certain ambivalence expressed, what could be described figuratively as a kind of schizophrenia. he Spanish Crown’s refusal to acknowledge Mexico’s independence until the late 1830s, paired with its attempt to reconquer its former colony in 1829, resulted in Hispanophobia becoming a common feature in most early expressions of mexicanidad. his attitude can be seen in literary works such as Xicotencatl (1826), as well as in some of the legislation that was passed, such as the 1827-1829 laws that resulted in the expulsion of Spaniards from Mexico. here was a need for Mexicans to distinguish themselves from Spain as they consolidated their independence. To be Mexican entailed claiming the Aztec past as their own and condemning all things Spanish, even if they were white criollos.

For the radical anticlerical, liberal Mexican politicians who tilled the corridors of power following independence, the United States represented a role model. heir rejection of their Spanish heritage, interpreted as the cause of their backwardness and their reactionary traditions, entailed a desire to emulate their northern neighbor. One politician and thinker, Lorenzo de Zavala (1788-1836),

Went as far as turning against Mexico during the 1835-1836 Texan revolution. However, with time, as the expansionism of the United States resulted in the loss of half of the national territory in 1848, most Mexicans found themselves developing a contradictory love-hate feeling toward the United States. As was noted by the 20th-century Mexican historian Edmundo O’Gorman, the Mexicans of the 19th century wanted the benefits of U. S. modernity, but they did not want modernity itself, preferring to retain their traditional Hispano-Indian Catholic customs. hus, definitions of Mexican identity went from rejecting the Spanish heritage to embracing it, in tandem with periods of admiration and revulsion toward the American way of life.