Discrimination and the Campaign FOR Civil Rights

Discrimination against Catholics predated the establishment of the Northern Ireland state. Catholics were disproportionately represented in lower economic and social categories and were rarely to be found in senior managerial positions. The political turmoil surrounding the consolidation of Ulster Unionist Party control further marked out the disadvantaged minority as disloyal. Thus local government constituencies were gerrymandered and Catholics were effectively barred from sensitive civil service positions. They were underrepresented in the new Royal Ulster Constabulary (RUC) and absent from the police auxiliaries known as the Specials.

Background to the Movement

Unionists feared losing control of their devolved parliament and government (from 1932 known as Stormont, after new parliament buildings opened in that year) to an opportunistic alliance of nationalists, socialists, and unionist independents. Though the Government of Ireland Act of 1920 required proportional representation in Northern elections, it was repealed for the 1929 general election. This weakened minority parties, particularly Labour, and consolidated the unionist-nationalist rift. Representation for Labour, independent unionists, and other groups fell from eight seats in 1925 to four in 1929, although their share of the vote increased.

In common with the situation in Great Britain, the Northern Ireland local government electorate was based upon a ratepayers' franchise. But when it was abolished in Britain after World War II, Stormont politicians elected to remain as they were. Protestants made up the majority of the 250,000 thus deprived of the local government vote, but Catholics, being lower down on the socioeconomic scale and thus less likely to pay rates, were disproportionately outside the franchise. The importance to unionists of the ratepayers' franchise was that it locked in the principle that those who paid the highest rates were entitled to the biggest say in the conduct of local government. Richer areas were disproportionately unionist. The political results of this principle were starkly revealed in the 1923 redrawing of many 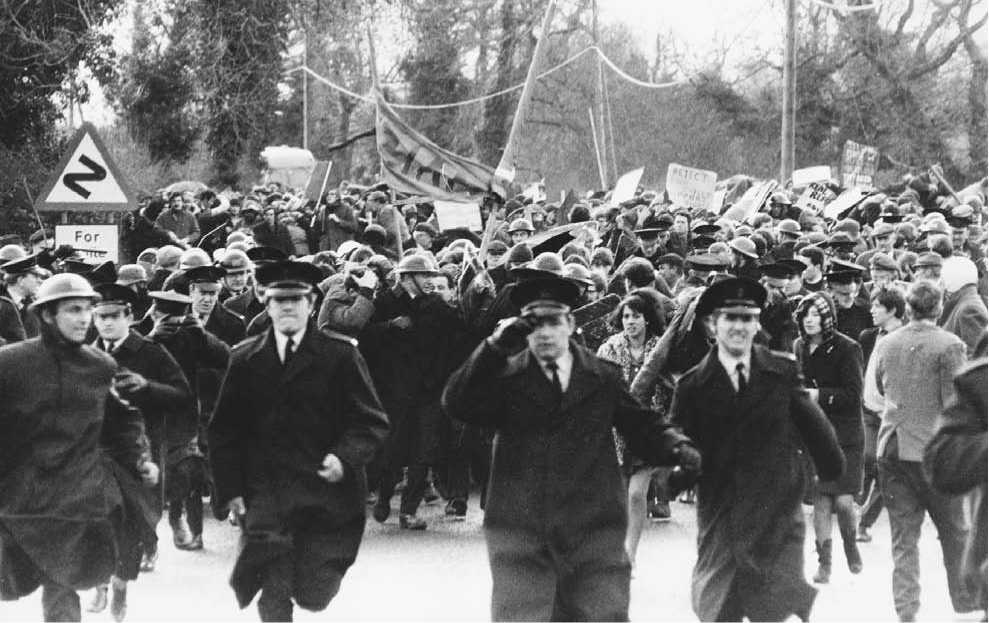 As a consequence, however, there was pressure to maintain the relative wealth disparities of Catholic and protestant districts, or else the entire delicate framework would collapse. The government in practice could rely upon private employment discrimination to sustain Protestant economic influence. Local government also strove to maintain a robust proportion of protestant employees. After the war, as local governments undertook slum clearance and built housing for rent, unionist-controlled local authorities made sure that Catholics and Protestants remained segregated. The inevitable housing bottlenecks caused much resentment. Even the large-scale infrastructural elements were carefully manipulated to minimize disruption of unionist electoral dominance.

In January 1964 the Campaign for Social Justice (CSJ) was founded in Dungannon, Co. Tyrone, "to collect data on all injustices done against all creeds and political opinions." Hitherto, civil rights propaganda had been simply one string in the antipartitionist bow. The CSJ's apolitical campaign was designed to appeal primarily to a British audience. In this they had some success, and a Campaign for Democracy in Ulster (CDU) pressure group won considerable support on the back benches of the British parliamentary Labour Party.

On 30 March 1966 a conference of more than eighty representatives, meeting at the International Hotel in Belfast, set up the Northern Ireland Civil Rights Association (NICRA), a "non-political pressure group modeled on the National Council for Civil Liberties." They organized the first civil rights march, in emulation of the movement in the United States, from Coalisland to Dungannon on 25 August 1968.

The city of Londonderry (Derry to nationalists) proved to be the powder keg, however. In a gerrymander in 1923, unionists wrested control from nationalists, an arrangement reinforced in the 1930s. A nationalist voting majority of 5,000 resulted in a unionist council of twelve unionists to eight nationalists. In the 1960s Derry was deprived of the New University, although there was general agreement that it was the most obvious location. Few were surprised when evidence emerged that there existed the "faceless men," a cabal of local unionists lobbying for investment to be directed away from Derry for fear of upsetting the delicate population balance behind the gerrymander.

On 2 7 August 1968 leftist activists in the Derry Housing Action Committee invited NICRA to organize a march there. This was rerouted to exclude it from the city center by the partisan minister of home affairs, Bill Craig. On 5 October 1968 the Derry march was stopped by police lines, and violence broke out after the Royal Ulster Constabulary moved in to disperse the crowd. This developed into two days of rioting and an immediate political crisis.

A thousand Queen's University students staged a sit-down in Linen Hall Street on 9 October after being barred from the Belfast City Hall area on the pretext of a Paisleyite counterdemonstration. They quickly went on to form People's Democracy, a radical and activist civil-rights group. In Derry, meanwhile, a broadranging Derry Citizens' Action Committee took over leadership of the city's civil-rights movement. An attempt to ban all demonstrations in Derry collapsed on 16 November when 16,000 marched and 2,000 staged a sit-down protest in the Diamond.

Police repression having failed, and under pressure from the British government, Stormont on 22 November announced a five-point reform package. This was a somewhat limited program, with the concessions of a points system for housing allocation and an ombudsman being the only U-turns.

Agitation continued, and on 30 November 8,000 civil rights demonstrators took to the streets of Armagh, only to be excluded from the city center by a belligerent and quite heavily armed crowd of 1,000 Paiseleyites. On 9 December 1968, Prime Minister Terence O'Neill broadcast to the province, addressing directly the civil-rights marchers: "Your voice has been heard and clearly heard. Your duty now is to play your part in taking the heat out of the situation before blood is shed." Shortly afterward he sacked William Craig, his controversial minister of home affairs.

The immediate response was favorable, and most civil rights organizations called off demonstrations for at least a month. However, one group increasingly in thrall to socialist radicals, the People's Democracy, organized a "long march" from Belfast to Derry, starting on 1 January 1969. They were harassed on their way and seriously attacked by loyalists on 4 January at Burntollet Bridge and as they straggled into Derry. Subsequent disorder in Derry saw a breakdown in RUC discipline and the temporary removal of police from a nationalist district of the city. The civil-rights agitation reignited, but on the following weekend it was doused again when protestors attacked police and property in a poorly organized demonstration in the Catholic town of Newry.

When O'Neill called a general election on 3 February, primarily to still dissent in his own party, civil-rights activists redirected their energies into electoral politics. A slew of civil-rights campaigners, notably John Hume, Paddy Devlin, and Ivan Cooper, ousted traditionalist Nationalist Party MPs. Meanwhile O'Neill failed to effectively reshape his parliamentary party, and there was general agreement that the Unionist Party was sliding rightward. In this atmosphere civil rights demonstrations were reignited, now emphasizing the demand for "one person, one vote" in local government suffrage and the repeal of repressive legislation arising from recent disorders. Severe rioting in April 1969, however, not only precipitated the fall of O'Neill but also eclipsed civil-rights agitation as communal confrontation and preparation for conflict became the dominant concern.