Far to the north, in the creole state historians colloquially call “the Transvaal” but which has gone under a variety of names (most often the South African Republic), cartographic practice and geographical knowledge were not centralized in a meaningful way until the end of the nineteenth century. The information and labors of missionary cartographers there were on the whole more likely to see print or other distribution directly, all the more because popular and scholarly interest in the interior geography of Africa in North America and Western Europe waxed in the decades leading up to 1900 as Europe laid claims to the continent (Butlin 2009, 277). The idea of a civilizing mission was not incompatible with this interest, but the “civilizers” who sent back maps relied upon the same incomplete and relational data and produced similar topological maps, even though their appearance was increasingly professional and precise.

The Lutheran Berlin Missionary Society was one of the most active in the Transvaal, certainly in the areas most densely populated and under the effective control of African kingdoms. One such area was the boPedi, or the Pedi heartland, site of a powerful state under the Maroteng king Sekwati. In that endeavor they in 1861 received the acquiescence, if not necessarily the blessing, of the Boer state headquartered in Pretoria that nominally claimed control of the area after 1845 although the baPedi always claimed otherwise until the 1870s when the Republic pressed the issue (Delius 1983, 32-33). The BMS and its handful of converts were always kept at arm’s length by the Maroteng and ultimately the society was ejected by new king Sekhukhune I around the end of 1865. One of the Berlin missionaries, Alexander Merensky, founded a new station about 70 miles south of the kingdom called Botshabelo, or “place of refuge,” where a number of converts relocated after 1865. There, next to the town lands of Middelburg, Merensky built a thriving settlement protected by a small fort and focused on industry and schooling, with workshops and even a press; Botshabelo in fact grew nearly five times in size (and many more in population) before Merensky’s departure in 1882 and became the showpiece for the BMS in Africa (Delius 1983, xii, 161; Merensky 1996, 336-343, 497-498).

Alexander Merensky however was not solely a missionary or an educator, but also had some medical training from his mission preparation starting during his teens, and apparently some artistic leanings that may have been connected to his parents’ early childhood efforts to groom him as a military cadet (Petrich 1919, 25-26, 36-37, 10-13). Before he arrived in South Africa in 1859, Merensky apparently already enjoyed riding and hunting and had a curiosity about the natural world, though his knowledge of geography has less certain origins (Petrich 1919, 12-13; Kayser 1937, 385). After his approval for Society mission work in 1861, Merensky appears to have busied himself primarily with the survival of the mission stations, but he took time to engage in exploration aimed at seeking Biblical sites (particularly Ophir of Solomonic fame) as early as 1862 based on information told him by African informants, and he collected such information that he would pass on to the explorer Karl Mauch in the late 1860s (Carroll 1988, 238-39; Hall and Stefoff 2006, 13).179 As an educated individual, Merensky took on various local duties and also built networks with other scientifically-minded people, especially Germans, in the Transvaal. In mid-1866, Merensky became the postmaster for the ward of Olifantsrivier, a position that probably brought him into contact with Friedrich Jeppe, who succeeded his brother as Postmaster in Potchefstroom later that same year and published the Transvaal Argus, the territory’s only newspaper.180 Both came to know Mauch, whose travels were far more extensive than either of theirs, and they were in a good position to publicize his data.

It appears that Jeppe was interested in compiling a map of the Transvaal from 1866 onward, both for purposes of postal efficiency and scientific exposition, and Mauch’s travels and sketches provided him with the opportunity for collaboration on a map the government hoped to send to the Paris Exhibition of 1867 (Carruthers 2007, 110; Transvaal Argus, May 29 and July 24, 1866). Indeed he appears to have produced a map with Mauch’s collaboration which he sent to Cape Town for printing by Saul Solomon & Co., but Jeppe was dissatisfied with the results and announced both the impending publication and his unhappiness with it (and a consequent delay owing to unspecified new printing arrangements in England) on the front of the July 10 and November 6, 1866 editions of his Transvaal Argus. Jeppe and Merensky by this time had a correspondence about the latter’s better knowledge of the far east and north of the region, which made him a natural ally in improvement of the map (Petrich 1919, 144). The pair recompiled Mauch’s map, with expanded information from the region’s few land surveyors, and sent it to the renowned German geographer August Petermann in 1867. This map in 1:1,850,000 scale was published in what Jeppe later described as “re-constructed and augmented” form by Petermann in 1868 as the “Original Map of the Transvaal or South African Republic” (in English) with an extended description by Jeppe in Petermanns Geographischen Mittheilungen (Jeppe 1877, 218; Jeppe and Merensky 1868; Jeppe 1868). Merensky’s direct contributions are hard to divine but his consideration of the expulsion of the BMS from the boPedi may explain why the map’s wash color was not extended over that region (Fig. 16.4). Jeppe worked hard to explain in following years, particularly between 1877 and 1881 when Britain governed the Transvaal as a colony, that this lack of coloring did not indicate that the Boers did not have a claim over those lands (Jeppe 1877, 221-22).

Fig. 16.4 Detail from Jeppe and Merensky (1868), showing area excluded by the Rev. Merensky

After publication of the 1868 map, Merensky and Jeppe appear to have gone their separate ways. Jeppe involved himself in governance and other ventures; Merensky was busy at Botshabelo, although he received from the Republic the grant of a farm (which he named “Gluck”) in thanks for his cartographic work (Petrich 1919, 152). However, Merensky did not stop compiling cartographic information, and in 1875 he published a new map in the Zeitschrift der Gesellschaft fiir Erdkunde zu Berlin that included new data primarily from published sources but also his own information, collected with admittedly “deficient” (mangelhafte) instruments, and noting that an uncertain relationship existed between the government in Pretoria and the various kingdoms it claimed power over (Merensky 1875a, 268, 370). The map (Fig. 16.5) was still entitled “Original Map of the Transvaal or South African Republic,” was still at 1:1,850,000 scale, and was labeled in English, to assure its appeal to the market for printed maps within South Africa and the British Empire.8 Merensky however changed many of the toponyms’ transliterations or names, likely in response to the improved knowledge of geographical names from the increasing number of residents and visitors at Botshabelo. This map was eclipsed within a year and a half by Jeppe’s new map of the

Transvaal, which was published even more widely and in a number of editions, but both seem to have been aware of the other’s work. One notable detail of Merensky’s 1875 map is that it shows the position of the mission stations abandoned by the BMS without noting that fact; this may have been a bit of self-interested disinformation regarding the success of the Berlin society.

This kind of broad map marketing of small-scale maps was something Merensky continued after leaving South Africa; his later maps, four-sheet charts of all of southern Africa on an even smaller scale of 1:2,500,000, were apparently more successful or at least were printed more widely and passed through four known editions between 1884 and 1889. All of these maps still bore the “Original Map of..moniker, in English, although it was printed in Germany and specified that it was all of South Africa including “native territories.” During that time Merensky was in Germany and so his sources were thoroughly European. Although Merensky returned to Africa in 1890, he went to Nyasaland (today Malawi) to found stations there and does not appear to have produced further maps. At some point during that decade, he however contributed information to a broader thematic atlas of missionary activity but the details are not clear (Van der Heyden 1996, 17).

It is however Merensky’s departure from South Africa, and the reasons for it, that reveals most starkly this missionary’s cartographic connection to colonialism. While his work with Jeppe and in 1875 certainly helped the Boer state in the Transvaal define itself as a geographical entity, his relationship with the British who annexed the Transvaal in 1877 became more active. Merensky had been an intermediary between the Boers and Sekhukhune when they fought the war that bankrupted the Republic in 1876, and held the opinion that the Boers were hardly moral in their dealings with the baPedi. The British, on the other hand, shared mutual respect and even admiration with Merensky. Hoping to unseat the hostile Maroteng paramount and return to mission work within the boPedi, Merensky was an invaluable source of geographical data about Sekhukhune’s kingdom for the British when the matter came again to war. An attempt to simply crush the kingdom turned into sieges and a failed attack on the capital in October 1878, and without good information on the area, the British turned to Merensky. Merensky in June 1879 provided not only an assessment but also a sketch map, which was gladly accepted and kept at Government House, where Sir Garnet Wolseley obtained it before he established his headquarters at Botshabelo in October.181 Later, the British lithographed this map for purposes of the printed reports after Sekhukhune’s capture in December; this lithographed version (Fig. 16.6), erroneously dated October, is the only extant copy.182 183

The map differs from Merensky’s 1875 published map in level of detail, though the lithographed copy suggests it was “drawn from memory.” Why, then, was Merensky consulted at all? The clue is probably in the personal names among the toponyms, indicating where people with potential loyalty to Sekhukhune were. Little other information appears on the map, but the topology of people who were transhumant or displaced by the unsettled conditions from 1875 to 1879 and important local landmarks were important for the British to know, and would have come from people at Botshabelo with personal connections within the kingdom. Merensky’s own personal knowledge was probably inferior and outdated, but his mediation and provision of that information to Wolseley was critical.11 The military importance of that timely spatial information was essential in planning the offensive against Sekhukhune’s capital, but likely not to anyone else. Indeed, Friedrich Jeppe at the time was chief compiler for the British colonial administration in Pretoria, but although it is likely he had access to this map he did not revise the topography of his own 1877 map in any way. 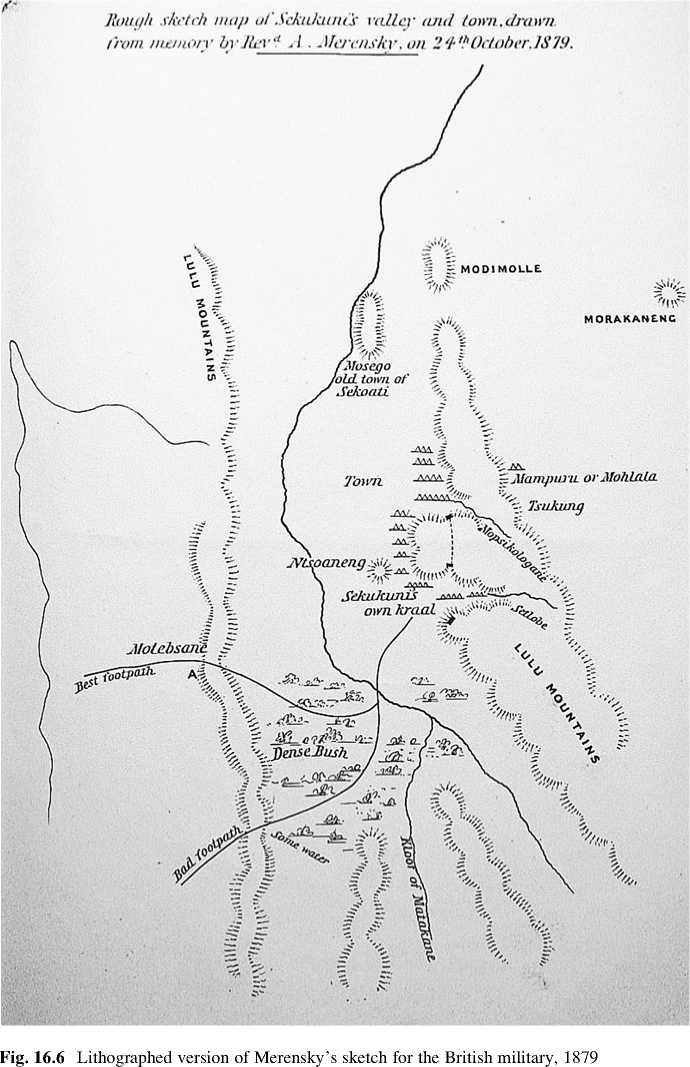 When the Transvaal Boers went into rebellion against British rule in 1880 over the imposition of new taxes and laws, Merensky was in favor of continued British administration; however, he was conscripted by the Boers for his medical capacity, and as such witnessed a number of key engagements in that conflict (Petrich 1919). The Boer irregulars probably had little use for Merensky’s cartographic skills, and no further sketches appear from him. With retrocession it was clear that his proBritish sentiment was a liability, and he elected to return to Germany at the start of 1882.

Merensky’s cartography is notable because information passed through him in a number of ways. Information from baPedi informants, passing travelers, and his own journeys appeared on maps he compiled or helped to compile. At the same time, he served to tailor the provision of information toward specific policy aims, such as the removal of Sekhukhune, the aggrandizement of mission activity in the region, or the publicization of the Transvaal as a conceptual unit. Although there is nothing about mission activity that restricts these activities to missionaries, the missionary’s geographical and social positions made them privy to certain geographical knowledge. In providing his sketch to Wolseley and the Transvaal colonial government, however, Merensky served a similar, though much more focused, role to that of Thomas in the Transkei relative to Colonel Maclean. The difference is that Merensky’s maps reached publication under his own name.