On 3 August 1914 as the cataclysm of war struck Europe, and Italy declared her neutrality despite long-standing defensive obligations to the Central Powers through the alliance forged in the days of Bismarck, the intentions of Italy had long been in doubt; and as early as 1902 she had anticipated 1914 by an agreement of neutrality with France in the case of individual attack. The Italians justified their policy on the grounds that Austrian action against Serbia violated the alliance with ItaK, since ’ienna had acted without consulting Rome. Further, the entr’ of Great Britain on the Entente side had resulted in conditions which Italy had not envisaged and under which, so Rome argued, she was relieved of her commitments. Germany and Austria-HungaiA’ accepted, at least outwardly, the accomplished fact of Italian neutrality, but they made an. xious overtures to ensure that Italy did not go over to the Entente. In fact, in the race to acquire allies, or at least to deny them to the foe, Italy was wooed by both sides.

Fhus she was able to follow a policy which Salandra, the Italian Prime Minister, contrasted with one of sentiment and aptly called sacro egoismo. Literally this meant ‘sacred egoism’. More broadly it referred to a line of action of e. xclusivc or innate self-interest, and to a policy which aimed at maximum acquisition of territory and prestige at minimum cost.

In Italy’s pursuit of 5acro  the. Allies were

From the beginning at an advantage. Italy’s longings were directed primarily towards the seven hundred and fifty thousand I talian-speaking  hd i. xnlf-of Italia irredenta ‘unredeemed Italy’ , an area consisting of part of the.ustrian. South 'Fyrol including the Trentino and Istria, along with the Habsburg Adriatic port and the hinterland of Trieste. 1 hus Italy’s territorial ambitions were mostK directed against the Dual. Monarchy; but despite pressures from Berlin and threats and blackmail from Rome, 'ienna refused to cede these territories. Dubious exceptions to this refusal were a probabl) insincere offer of part of the Frentiiio in. March 1915. followed by a larger concession in. Mas when it was alri'ady too late to keep ItaK out of sar. On the other hand, the .llies had less to lose even though they had to be careful not to offend. Slav susceptibilities by a magnanimfjusoffer to ItaK, so the could promise the Italians considerable gains in return for their aid in achic-ing victors. .Moreoser, as 191'j dassned, the.llies fjecame more desperate to break the KIimkIs deadlock in the vsest sia a thrust into Gentral Europe from the. south, and their offers to Italy increased. However, there were accompanying hints that full belligerency rather than mere neutrality would be exacted in return.

.At the same time, other factors drose Italy towards war. Popular Italian sentiment, though hoping for Italian non-belligerency, was firmly in favour of an Entente victory against Austria, Italy’s feared and hated rival in the Adriatic and the Balkans. Further, the war faction was dominated by the articulate middle class and included important industrialists and publicists such as Luigi. Albertini of the Milanese liberal newspaper

Opposite: The war beuveen Italy and.ustria-MuniJars' look place largely along their common frontier, the Dolomites. This illustration e. xaggeraies the techniques used but not the terrain over which artillery had to be hauled.


4'his cartoon shows Italy hrat ely stringing up the .Austrian Eagle. The task was neither so bravely nor St) easiK accomplished. 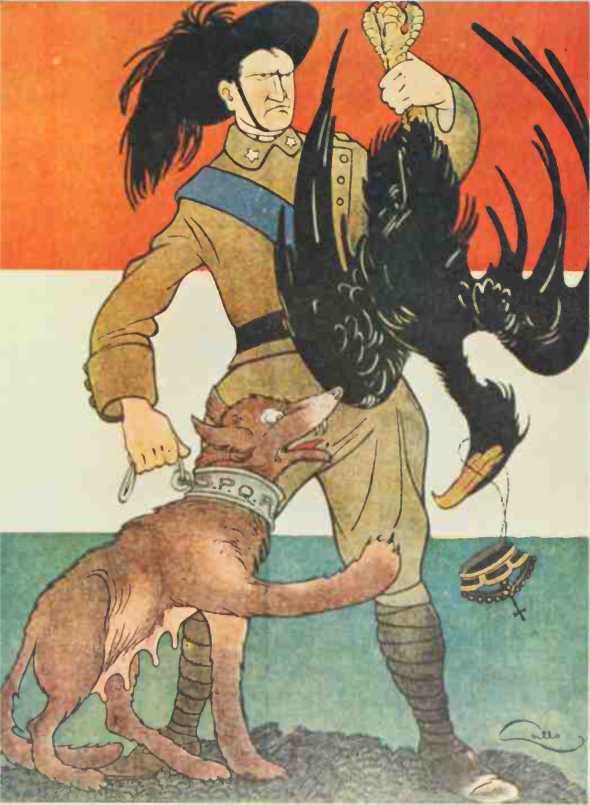 Above: Italians cheer their Queen and Princess outside the Royal Palace when Italy declared war on the Central Powers in 1915. Opposite top: An Italian peasant goes off to war. Opposite bottom: The Italian Air Force played a limited role in the first campaigns. The pilot, Gabriele d’Annunzio, centre, was Italy’s great nationalist poet. He played a crucial role in the seizure of Fiume after the war.


General Count Luigi Cadorna, the Italian Commander, who was inhihited-hy both circumstances and temperament. 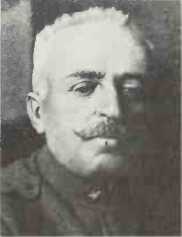 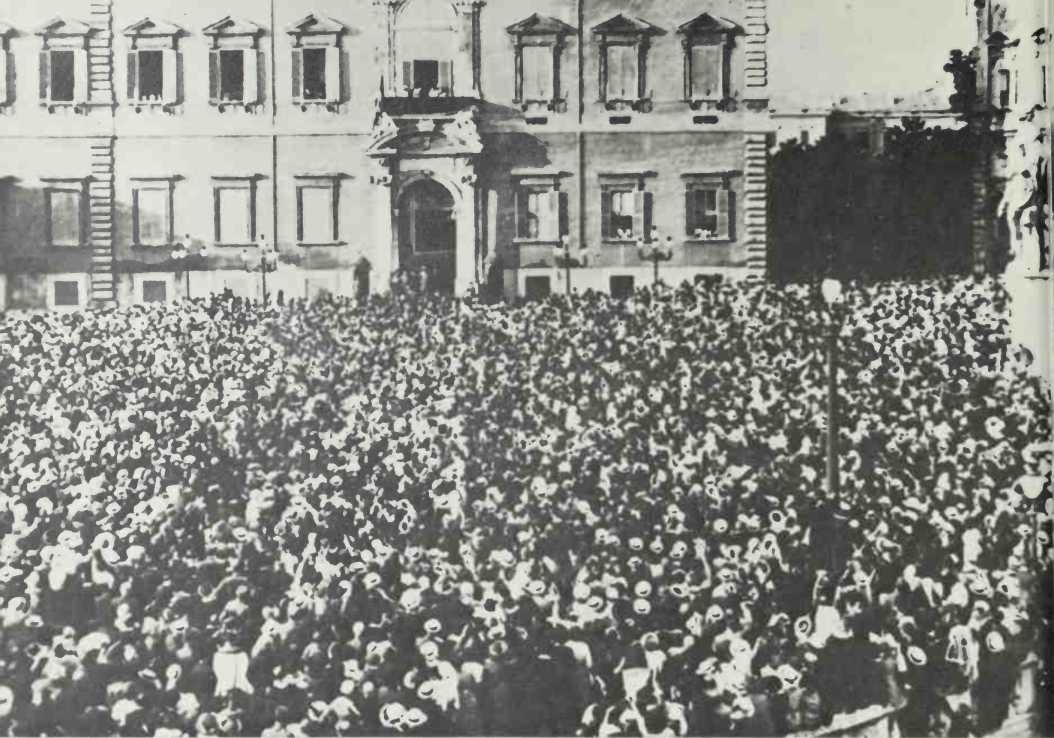 Corriere della Sera). Finally, many leaders of government and captains of industry felt that the war provided a Heaven-sent, now-or-never opportunity for the realization of Italian ambitions. Retrospectively it is thought that as early as October 1914 Salandra had decided to join the Allies if good enough terms could be obtained, a decision provoked by nationalistic ferment.

Propelled by these sentiments, Italy declared war against Austria on 23 May, though not against Germany until 27 August 1916. In her pocket lay the Treaty (or, more correctly, the Pact) of London, signed on 26 April 1915 by Italy, Britain, Russia, and France. Though the terms were theoretically secret, their gist was widely rumoured. The Allies had promised Italy that in the event of victory she would receive all of the South Tyrol (Alto Adige) south of the Brenner Pass; Istria (including Trieste) and the northern Dalmatian littoral; the Albanian port of Valona and an Italian protectorate over that country; legalization of her position in the Dodecanese Islands, off the Turkish coast; and a loan of /)50,000,000. Moreover, if victory led to a partition of Turkey, Italy would receive a sphere in Asia Minor, as well as suitable booty if Britain and France appropriated the German colonies. In return, Italy was to join the war against all the enemy within one month. In fact, however, this proviso was almost immediately violated by Italy’s dilatory declaration of war against Germany, a delay caused mainly by her financial problems.

Thus Italy had joined the war: but the worth of her participation was at best dubious. The Libyan War against Turkey only three years earlier had cost Italy dearly, and in 1915 her military resources were still depleted. Further, Italy lacked sufficient heax’y industry and resources of investment for large-scale production of military material. Despite these obstacles, however, she managed to triple the size of her armed forces to nine hundred thousand men by the spring of

1915In May 1915, with the Austrian and German offensive in Galicia gaining momentum, some Habsburg divisions could be spared for the Italian front. Seven of these were facing Italy by 23 May. Four days later. General Boroevic von Bojna, a Groatian whose valour had been shown at Przemysl, took command of the Austrian Fifth Army against the Italians. A believer in the importance of solid defences, Boroevic immediately ordered that the Austrian troops should construct positions, place obstacles in front of them and remain there.

Italy was poorly placed to open a campaign against her northern neighbour. The contortions of their common frontier left Austria in a position to partition Venetian provinces along the geographically convenient wedge of the Trentino. An Italian offensive into the mountainous Alpine frontier region would be, most literally, an uphill battle against the Austrians poised above her, and.

Even if successful, would result in no great strategic gain. In the east, the terrain was rela-ti elv and only relativeK less difficult, but it w as irregular, bleak and barren country in w hich any army would find it hard to make headway. As Edmonds emphasizes, Italy’s single great advantage was that her lines ofinterior communication were shorter than those of the enem. Vet, although troops might be swiftly dispatched between the Trentino and the eastern frontier of the Isonzo River, there w as always the danger ofan .Austrian attack on the rear positions.

It seemed to both sides that the Isonzo front was the easiest area in w hich to bid for a decision. Even there, however, the Italians were acutely aware that the Austrians, controlling the rier crossings and dominating the heights, were well prepared to riddle and decimate any Italian moe forward. Piero Fieri notes the paradox of the Italian position: ‘The rier could not be crossed until the mountains had been seized, and the mountains could not be seized until the ri er had been crossed.’

Nevertheless, during 1915 the first four Battles of the Isonzo took place. Se en more w ere to occur before the war was over. For Italy, the campaign became an exercise in futility. At the loss of a quarter of a million men, she failed to pre ent the Central Powers’ success against Serbia and succeeded in dierting only a dozen. Austrian divisions from the east.

In each case the Isonzo fighting was marked by an Italian ofl’ensise. for Austria, coping with the campaigns against Serbia and Russia, chose to stand on the defensive. 'Fhe Italian aim throughout was the immediate gain of the Carso (Karst or Kras Plateau and the town of Gorizia Gorzj, though the ultimate objective remained Trieste and, beyond it, the Danubian plain ia the Laibach Ljubljana Gap. By this means, the Italians hoped to fulfil their promise to Russia of ifi May to trv' to join up with the Serbs.