Having disposed of the Japanese in the southern Solomons, it was MacArthur’s turn to shoulder the burden of the counter-offensive. While the battle for Guadalcanal was still in progress, his .American and Australian forces had begun a campaign in the Papuan peninsula ofNew Guinea to prevent thejapanese from seizing Port Moresby, thus interrupting Allied supply lines and disrupting industrial production in Australia. This contest, a prerequisite for the assault on Rabaul, was still in progress when the Battle for Guadalcanal ended. Until it was concluded, there could be no pressing on with the counter-offensive.

Lo reach Port. Moresby, thejapanese would have to cither take the city through an amphibious (operation or adsance across the Owen Stanley mountains from Lae and Salamaua. Since an attempt at the former had hcen repulsed in July 1942, thejapanese were forced to adopt the latter appr(jach, i. c., a trek through the mountains. Although the peaks were high and the terrain rugged, the Japanese succeeded in crossing the mountains through narrow foot paths, and on 12 August they took Kokoda and its small airstrip. From Kokoda ihe tried to seize Allied installations at. Milne Bay but were pushed back instead to th<- Buna-f»ona ar<‘a.

A joint Australian-.merican force sought to dislodge thejapanese from their foothold on the northern coast of Papua in. N'ovember, hut the Japanese had dug in and built bunkers out of earth reinforced with sheet iron or sieel drums. .Mthough they lacked supplies, food, and medicine, they were able to keep the. Allies at hay for over ivso months. .MacArthur was so distressed by this that at the end of. November he personalis ordered a change in the Allied command in this area in the hope that more spirited commanders would end the engagement so that the Allies could get on with the assault on Rabaul. Still, thejapanese were able to hold their position until the beginning of 1943; the last men were withdrawn on 22 January.

With Guadalcanal and the Papuan peninsula secured, the Allies could move on to Rahaul, Japan’s major station in the southwest Pacific. In the compromise plan of 2 July 1942, the Joint Chiefs ofStaffhad proposed that the assault would follow immediately upon the seizure of the Solomons and the neutralization of Japanese positions in New Guinea. Although New Guinea had been partially secured by the end of 1942, of the Solomons, only Guadalcanal was controlled by the All ies. So before the attack on Japan’s primary base could begin, the offensive in the Solomon Islands would have to he completed. The fierce resistance put up by the Japanese in Guadalcanal and New Guinea had shown, however, that this |)art of the campaign would take longer than had been anticipated and recjuire a greater exj)cnditure of force than had been originally allotted. In short, it was necessary to rewrite plans for the completion of the olfensive.

In plotting a revision of their scheme the Joint Chiefs of Staff again encoiiiitered the problem of securing the coo])ciation (Tboth the Army and Navy. Neither MacArthui noi Admiral Halsey had enough men to execute the scheme alone, nor would a one-track approach to Rabaul have been in the best interests of the Allies. F. v en if .M a( Arthur or Halsey could have engineered an attack without the cooperation of the other, a two-pronged assault with the evamtual convergence of Allied force's on Rabaul would confuse the Ja|)anese and had a greater chance of success.

Ope ration Clartwheel, the re-vise-d plan feir the att. u k eui Rabaul, calle-d fe>r a dual e lfeirt. Ge ne ral .Mae Arllnir's Seuilhwe-st I’ae ifie force s weTc tee attack and take the Trobriand Islands, the Lae-Salamaua area in New Guinea and the westernmost portion of New Britain, the island on which which Rabaul was located. Meanwhile, Admiral Halsey’s South Pacific force was to seize the rest of the Solomon Islands, particularly Bougainville, from which they would be ready to attack New Britain. Both ventures would require amphibious assaults supported by aerial drops, following which new airfields would be hacked out of the jungle. The terrain would be difficult, the weather uncooperative, and the risk of malaria and other tropical diseases immense.

Preparations for Operation Cartwheel began in March 1943, but the offensive was not launched until 30 June, when forces commanded by Halsey and MacArthur landed simultaneously at Woodlark, Kiriwina, Nassau Bay (New Guinea), and New Georgia. The Trobriands were taken with no difficulty but MacArthur encountered stiff resistance when the landing party at Nassau Bay pushed on toward Lae and Salamaua. It was two weeks before the Americans could link up with .Australian forces pushing toward Salamaua from the south, and even then the Japanese were not easily dislodged. It was only through a ruse that MacArthur succeeded in throwing the Japanese off balance and this involved the capture of Lae. Salamaua was not taken until 16 September, but from that point on, the New Guinea campaign proceeded as planned. 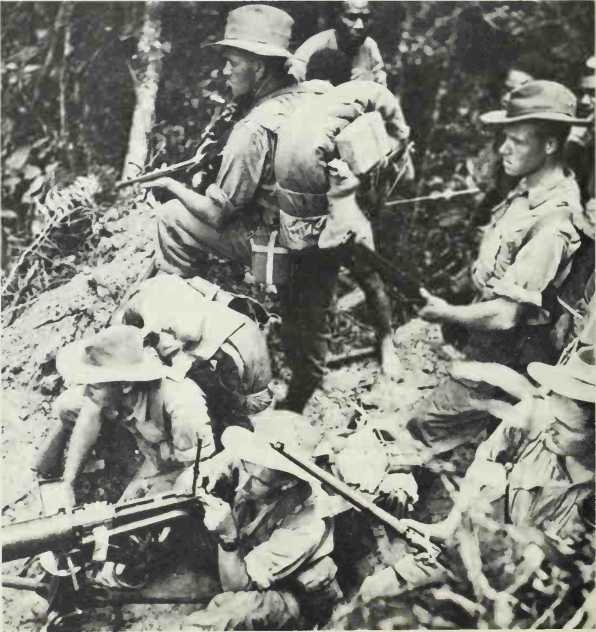 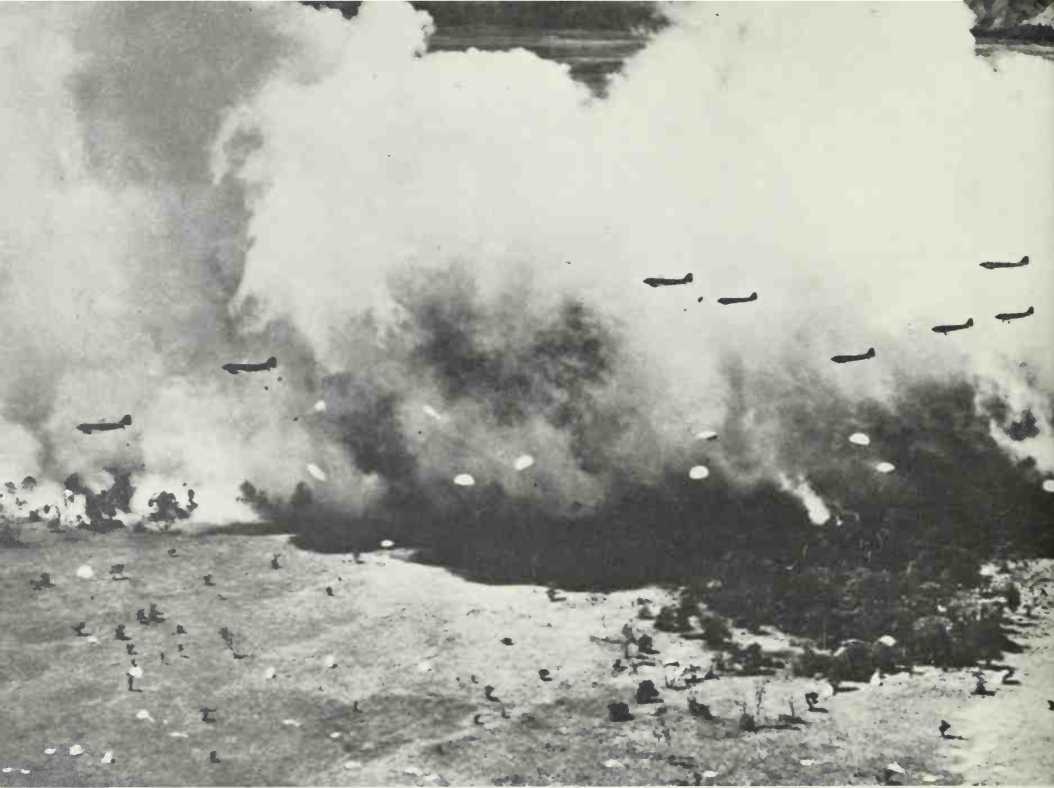 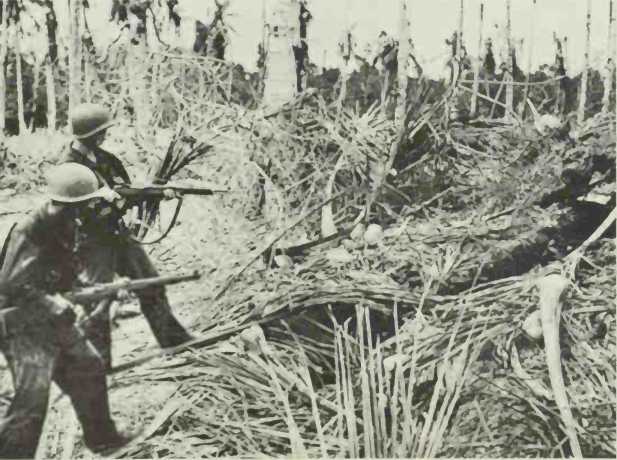 
Admiral Halsey’s South Pacilit force encountered equalK stiff resistance in the campaign in the Solomons. The landings ai. New Georgia were carried otf without incident, hut the Americans soon came under he. i\ lire from thejapanese defenders. The purpose of the landing in New Georgia was to capture the Japanese, iii-base at Munda Point, from which.mcric. m aircraft could then be sent o er Houg. iins ille. , direct assault on the air b. ise h. id been ruled out. is too dangerous, so Halses and his lieutenant. Rear .dmiral Richaid KclK furner, proposed a series of landings followed b an oerland trek to the .lunda Point base, a dilhciilt task due to the rugged terrain and dense jungle coer. .lunda Point did not fall to the.llies until 5 ,ugust, thirt-si das after the first landings vere m. ide.

New Georgia was secured b mid-.ugust, but the campaign had prosed more costly and timeconsuming than thejoint Chiefs had anticipated. If thejapanese continued to oiler as much resistance cLs the had in New Georgia and New Guinea, the olfensie would drag on indefinitely and Allied casualties would soar. .ShortK alter the New Georgia campaign was concluded thejoint Chiefs uineiled a new scheme.

The alternative plan called for. Mlied troops to leapfrog oer or around the fiercely defended Japanese bases. By substituting a fle.iblc policy the. Mlies would gain aluable time and sa e li cs. Japanese bases which they had passed would not prove menacing, as the garrisons would be isolated; once the.llies established forward air bases in front ol the sites, they could be neutrali/.ed through aerial attack.

Leapfrogging was begun imim-diately and pros ed so successful that the principle was uliimat-el applied in the decision to skip oer the Japanese base on Rabaul in faor ol a less costly landing elsew here. But thi. s decision was not made until the end of 1943. and in the meantime the .llics faced some hard fighting, particularly on Bougains ille, w here they landed at the beginning of No ember.

The Bougains ille landing w as made at Empress

Bay on i Nosember. Halsey intended building a bridgehead deep enough to allow consti uction of an air held w hich could be used to attack Japanese bases at Rabaul and elsewhere in the South Facilic, and then to neutralize the Japanese garrison on the island, .lthoiigh thejapanese had as many as 55,000 men on Bougaiin ille, the w ere loc ated at the southern end of the island and did not pose. in immediate threat to the landings; when H. lists s.1,nines tried to expand their perimeter, howeser, thes met with stiong resistance.

Bougainsille was too close to. New Britain lot the Ja|jancse to accept the American landing lightls, not could they pciinit Halses to supplement his original binding force unmolested. .ccordingly on > November, the das after the first landing, a Japanese task force of ses en shifis s as sent to the area to pres ent the landings. Halses orderc'd Admiral Spruance to engage this task force, and on 5 .Nosember Spruance’s Fifth Fleet attacked the japanese, forcing them to abandon the svaters betsveen Rabaul and Bougainville. From then on thejapanese Nass did not menace the Allied operation on Bougainsille. .Although Japanese forces continued to occupy the southern portion of the island, they svere unable to dislodge the.mcricans from their beachhead svhich had been expanded to a ten-mile svide enclas e by the end of the year.

.After Bougainsille, Operation Cartssheel entered its final phase. Rabaul had been the original goal of the. Allied adsance, but as the seal ended, the Ghiefs of Staff decided that suc cessful operations elsessheie had neutralized Rabaul. md that it svould not be nc'cc-ssars to. ittack thc‘ installation. Instead, a minor landing svould bc‘ made to secuie an ait field on the svcxstc'in tip of Ness' Britain and the Allies svould increase theii force's on. Ness Guinc'a in order to clear out the remaining Japanese pockets on that huge isbmcl. 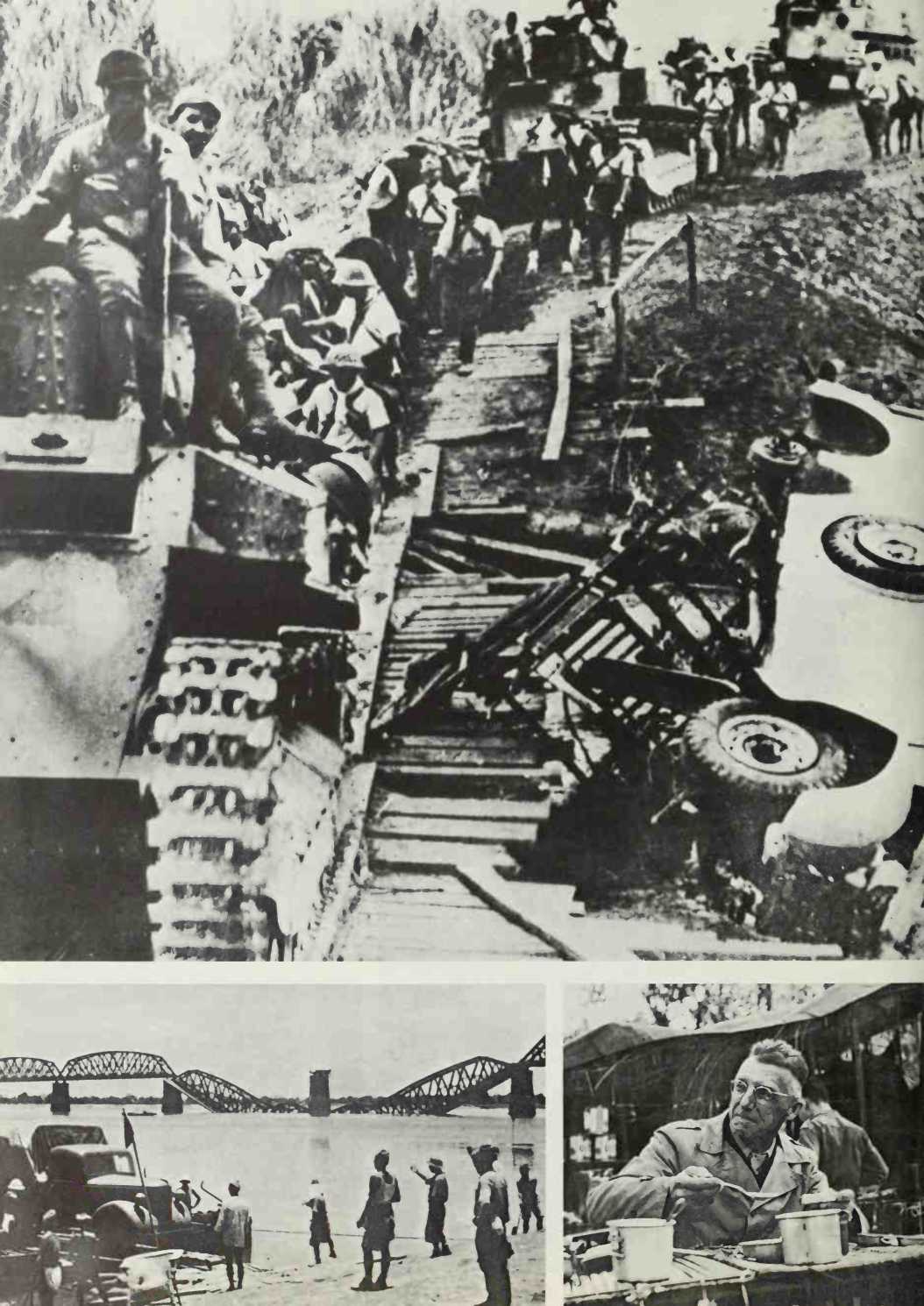