Once established at home. Hitler attended to the revision of foreign policy. His diplomatic object-i cs had originally been stated in Metn K'ampf in 1924, and included union with Austria and other Germanic peoples in central and eastern Europe, and the creation ofan area of e. xpansion to include western Russia and the Ukraine. Although he repudiated Mein h'ampf on occasion for political reasons. Hitler never really wavered from his original goals.

Although he recognized that conflict with the Soviet Union and France was inevitable, Hitler hoped to avoid a confrontation with Great Britain or the United States, since his aspirations did not include the creation of a vast overseas empire for Germany. Thus he was careful to pacify these democracies as much as was possible without sacrificing the attainment of his other goals. During the early years of the Third Reich, he tried to appease France as well; as long as Germany’s army and navy remained small, it would be imprudent to risk confrontation with the western allies, even the French alone. It was imperative that Germany’s armed forces be increased and re-equipped, and this could never be accomplished if the Allies believed that Germany intended waging another war. Fhis being the case, he was careful to speak only of his interest in peace and to discuss only those aspects of the conditions regarding the disarmament of Germany that reasonable men could not deny needed readjustment.

While the rebuilding of Germany’s armed forces went on in secret and in violation of the provisions of the 'Freaty of V'ersailles, Hitler was not yet ready to repudiate the treaty unilaterally. 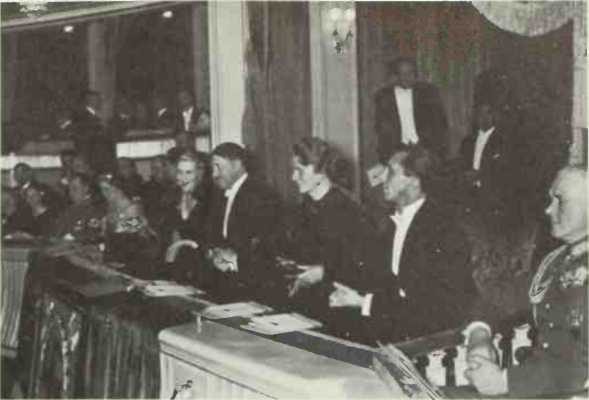 Above: The Hitler Youth mobilized for the supreme national effort to create a Greater Reich. Above right: Mass rallies were held in Nuremberg to drum up enthusiasm for the New Order.


Right: After keeping his supporters waiting for often more than an hour, the Fuehrer entered the stadium to be greeted by a tumultuous ovation.


Nor was he unwilling to negotiate changes in its provisions. Although the French remained intransigent with regard to any alteration of Germany’s military status, the British government was more willing to acknowledge that it was time that the treaty be reised. Anxious about French military supremacy on the continent and sympathetic to the reasonable nature of Hitler’s proposals, they agreed that there was justice in Hitler’s criticism of the peace settlement and in 1935 entered into bilateral arms agreements with the Third Reich. This provided a sanction for the rearmament of Germany which had already taken place and recognized publicly what Hitler had long been stating privately, that since the disarmament provisions applied to all signatories, the failure of the victorious allies to adhere to the spirit and letter of the treaty obviated any German obligation to do the same. The French protested, but it was too late to reverse the course of events. In 1936 German forces re-occupied the Rhineland and, for all effective purposes, the Treaty of Versailles was null and void.

Throughout the mid-3o’s tensions increased as fascism in Italy, Nazism in Germany and the military' dictatorship in Japan grew more aggressive. In October 1935 Mussolini launched a campaign against Ethiopia. His success there encouraged him to send troops, planes and supplies to the Spanish fascists when they rebelled against the Republican government in 1936, a venture in which he was soon joined by Germany. Russia promptly moved to support the Spanish government, and the Spanish Givil War, which lasted until 1939, was to prove a testing ground for new weapons and techniques which would be used to great advantage in the larger conflict to come.

As none of the western democracies saw fit to take any effective action to stop these campaigns. Hitler was encouraged to press for a political union with Austria and territorial concessions from the Gzech government. Seizing upon the Wilsonian principle that people of common background, culture, and language should be governed by their peers, the Fuehrer took Austria by force in March 1938 with hardly a word from the Allies. Ghamberlain did nothing to prevent the Anschluss because he thought it reasonable that Germans should be governed by Germans; the assumption was that the Austrians were Germans and their relationship with the Third Reich was an internal matter which should be decided without outside interference. The French did nothing because they had no commitment to come to Austria’s rescue and were beset by political chaos at home, and the Americans were still clinging to their isolationist policies. Phase one of the plan to create a greater Germany had been achieved; it was now time for phase two, the annexation of the Sudetenland.

The rationale for demanding that the Gzech government cede the Sudetenland to Germany was even more convincing than the explanation offered for the seizure of Austria. After all, millions of German-speaking people lived under Gzech sovereignty and were demanding union with the Fatherland; in asking that their land be annexed to Germany, Hitler was only speaking for an oppressed minority. The Gzechs were in a better position than the Austrians to resist Hitler’s demands. Their army was large and well equipped, and the French and the Soviets were pledged to come to their assistance in the event of 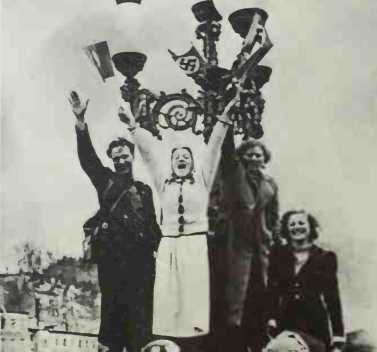 Nuremberg rallies were often used to demonstrate Germany’s new armed might. Above: Austrians rejoice in Salzburg when Germany annexed their country in the. Anschluss of


An attack. The British, although under no treaty obligations to rescue Czechoslovakia, were known to oppose German militar)- intervention, or so the Czechs believed. Thus, when Hitler began to rattle his sword in May 1938, the Czech army was partially mobilized and the Prague government prepared for war.

Since Hitler’s generals were opposed to a military confrontation with the Czechs, the Fuehrer agreed to a suggestion made by Mussolini and convened a four-power summit conference in Munich on 29 September 1938. Again France and Britain remained unprepared to actively oppose a rc-armed Germany and accepted his position, agreeing that some ten thousand square miles of Czech territory should be anne. xcd by Germany. In return Hitler disowned any further territorial aims in the country and the British Prime Minister, Neville Chamberlain, returned to London hailing the conference as a harbinger of ‘peace in our time’. His optimistic words, however, failed to reassure the Czechs, who had been forced to sit by and watch the great powers dismember their country. Their pessimism proved to be well justified, for in less than a year, in .March 1939, Hitler swallowed up the rest of the small country; not to be outdone, Mussolini took Albania three weeks later.

The English people, who had been told repeatedly that Munich was a final settlement, felt that their government had been made fools oi, and Chamberlain’s own confidence in appeasement was severely shaken. When he heard rumors of German troop movements near the Polish border in March he wrote to that country, promising that if their independence was threatened, ‘His Majesty’s Government and the French Government would at once lend them all the support in their power’. It was an empty gesture, since Britain had no means offulfilling her bargain, and was hopefully intended to incline Hitler toward a policy of moderation. In fact Hitler used it as an excuse to repudiate the German nonaggression pact with Poland of 1934 and the Anglo-German naval agreements of 1935; in August 1939 he shocked the world by signing a non-aggression pact with Russia. Britain responded by signing an Anglo-Polish treaty of mutual assistance, but it was too late. W’ith his eastern front secure. Hitler was free to move troops into Poland over the issue of Danzig and the Polish Corridor. Great Britain declared war on Germany at 11 a. m. on 3 September 1939 and the French unhapiiily followed suit at 5 p. m.; belatedly, the two governments began leisurely to prepare for battle.

Below left: German troops cross the LudendorfT Bridge to re-occupy the Rhineland in 1936. The Allies could have slopped them if they had tried.

They didn’t. Below: Hitler signs the. Munich Pact which sealed the fate of Czechoslovakia. Behind him (from left to right Chamberlain of Great Britain, Mussolini, and Premier Daladicr of France.

Right: Neville Chamberlain returns from Munich with a scrap of paper which he thought guaranteed ‘peace in our lime’. 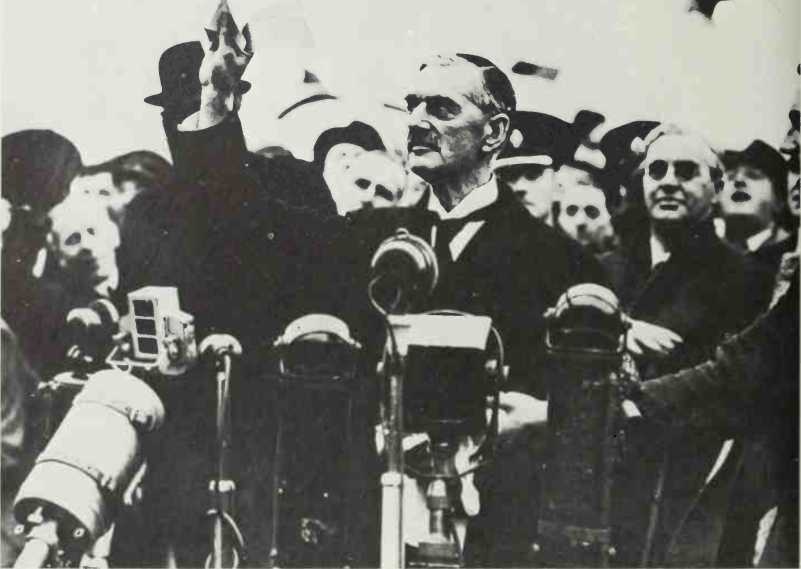