The Rise and fall of the Weimar Republic

For the German people the Paris settlement was a shock from which they never quite recovered. The Weimar Republic was forced to accept an ignominious end to a war which it had not initiated, and to acknowledge a huge indemnity for the destruction brought about by this war; foreign forces would occupy German soil and her armed forces would be dismantled. These were bitter pills to swallow for a people who as late as the summer of 1918 expected that they would win the war, and who had not seen allied forces in Germany at any time. It was no wonder, then, that the Germans reacted with digust to the peace which had been thrust upon them. The Allies had been just, but it was justice without mercy.

The fragile Weimar government attempted to fulfill Germany’s obligations under the treaty in good faith, but the combination of revenge abroad and hostility at home was more than it could handle. The Republic had been born in chaos and represented the will of a minority of the German population. From the very beginning, conservatives and monarchists refused to accept its legitimacy while radical socialists and communists rebelled against its authority.

That the Weimar Republic survived at all was due to the genius of its leaders and not its institutions. to the efforts of Walter Rathenau and Gustav Stresemann, the government lived through the Sparticist revolt and the Kapp Putsch and re-established Germany’s position in the world community, while attending to pressing domestic problems such as inflation and economic stabilizati(jn. By 1929 many of these problems

Opposite: Inflation almost destroyed Germany in Tliese banknotes, wot til billions of marks, might have been enough to h. ive purchased a loaf ol bread

Above: Unable to maintain any sort of a large standing army, the German General Staff was forced to train with these wooden tanks during the years of the Weimar Republic.

Below: Hitler and Ludendorff join forces in an attempt to overthrow the Weimar Republic in 1923. 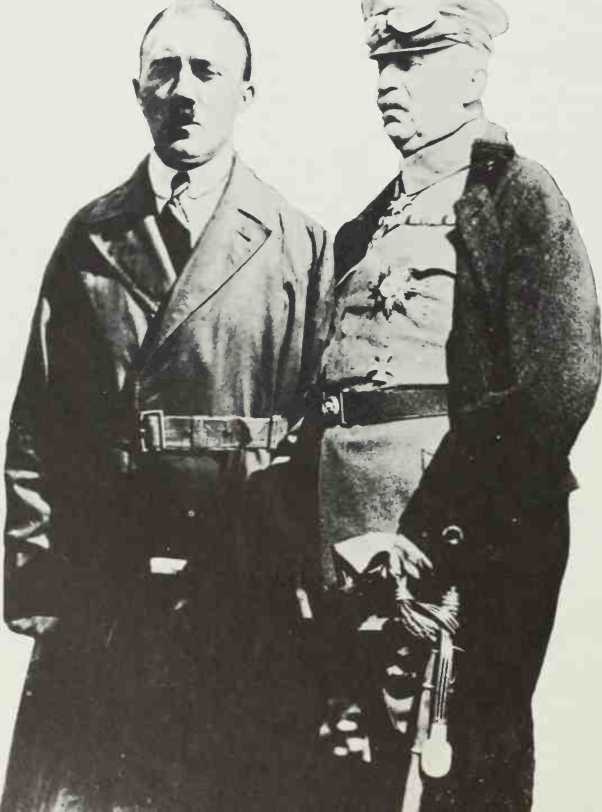 Had been solved or solutions were near at hand. Then came the economic chaos of the Great Depression.

The depression, which had. disastrous effects in America and throughout Western Europe, proved fatal to the Weimar Republic. Just as it appeared to be winning greater support from the public and the press, the floor fell out from under it; ironically, Stresemann, the architect of Germany’s economic reconstruction, died in the same month, October 1929, when the New York stock market crashed. This coincidence was most unfortunate for the government since Stresemann was, perhaps, the only moderate political leader capable of holding the Weimar coalition together while attending to the problems posed by the new economic disaster in Germany. With his death the coalition rapidly collapsed.

The impact of the depression in Germany was profound, bringing an immediate end to the renewed prosperity of the late 1920’s. In 1930 over three million Germans were out of work; two years later the number of jobless workers was over six million. Payment of reparations, always a sore point in Germany, could not be continued and the Allies responded to this failure by sending troops into the Saar valley in order to punish the German government.

Wflth the nation in economic dislocation and its most able defender dead, the Weimar government struggled to maintain its existence. In September 1930 Chancellor Heinrich Briining, Stresemann’s successor, was forced to call for new elections. By this time the depression had become severe, and the conservative-moderate bloc in the Reichstag was replaced by radical delegates from the left and right. The Communist Party increased its share of the vote from 3,263,000 in 1928 to 4,600,000. The National Socialist tally increased even more, from 810,000 in 1928 to

Rather than permit the creation ofa communist government. President Hindenburg permitted Chancellor Briining to remain in office and the country was governed by presidential decree from 1930 to 1932. So long as Briining had the support of Hindenburg and the leaders of the army, the system worked well, for however much the leaders of the non-authoritarian parties in the Reichstag disliked the arrangement, they dared not cause the defeat of Briining’s government for fear of a Nazi accession to power or, on the other hand, a communist victory. Briining was forced to resign in May 1932 only after leaders of the army refused to support him, and even then a moderate government was assured by the appointment of Franz von Papen as chancellor. Papen, who

Above; French troops occupied the Ruhr X'allcy when Germany was unable to pay reparations to the Allies.


Continued to rule through presidential decree, hoped to factionalize the Nazi party and forge a new conservative coalition in the parliament. To this end, he called for an election in July 1932.

TTie election resulted in an increase of Nazi strength in the Reichstag, 230 National Socialist delegates being returned as opposed to 108 in 1928. Undaunted, Papen dissolved the new Reichstag and called for yet another election, hoping that the popularity of the Nazis had peaked and that their treasury had been drained by the election campaigns of July. When the new Reichstag convened in November, the Chancellor’s predictions proved to have been correct, for the Nazis won two million fewer votes than four months before and lost thirty-four seats in the Reichstag. No sooner had the election been concluded, however, than his resignation was demanded by the very men who had persuaded

Hindenburg to appoint him in the first place. By this time, December 1932, the President was ill, and tired of the schemes of the Nazis’ the conservative opponents. .After the brief and unsuccessful chancellorship of General Kurt von Schleicher, Hindenburg finally agreed to allow Adolf Hitler to form a new government.

With Hindenburg dying. Hitler quickly moved to consolidate his power. In March 1933 he persuaded the Reichstag to pass an enabling act granting him unfettered power to legislate and conclude treaties for four years. During the following months, opposition parties were dissolved and anti-Nazi officials were dismissed from the bureaucracy. When Hindenburg died on 2 August 1934, Hitler assumed the office of the presidency as a result of a popular plebescite and the Nazi revolution began in earnest.

Having eliminated his political rivals. Hitler

Below: Early. Nazis who tried to overthrow the State in the Beer Hall Putsch in 1923. 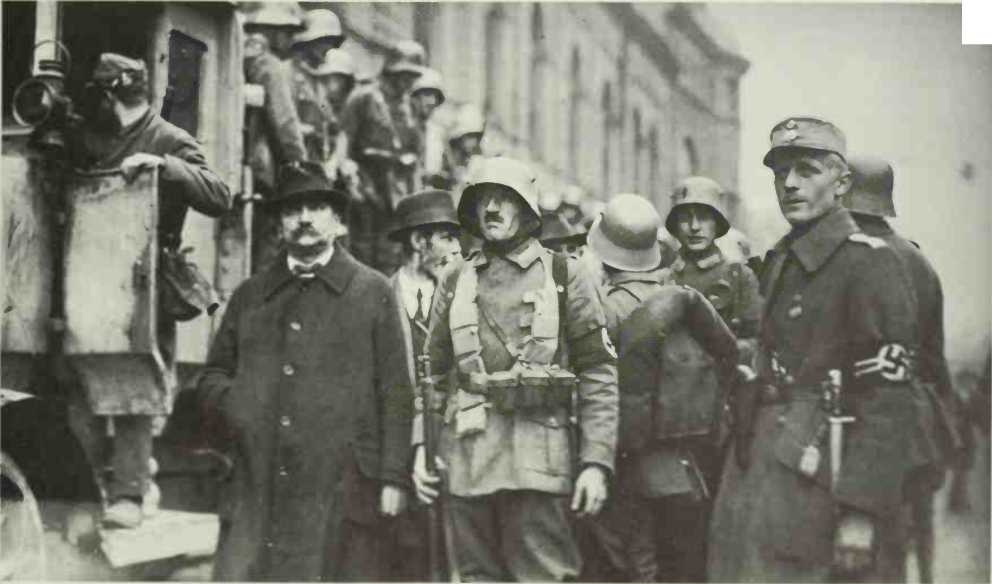 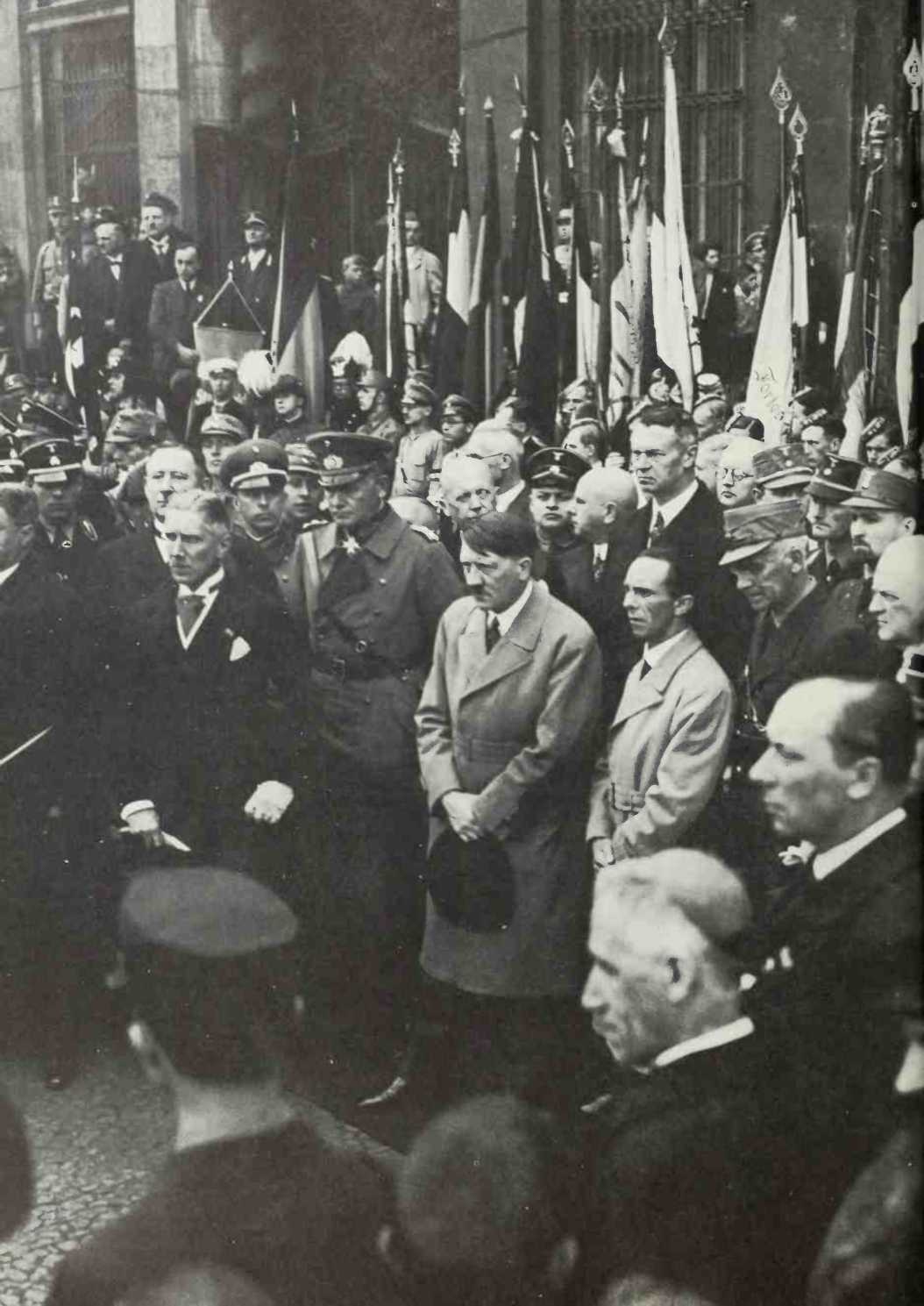 Turned hLs attention to rials within the National Socialist movement, purging them from the party in a brief reign of terror. Ernst Rohm, leader of the SA, was killed during the night of 29 30 June, and Gregor Strasscr, a leading party organizer and leader of the left-wing clique within the mosement, met the same fate. How many of Hitler’s associates were murdered during the purge remains unknown but when it was completed, he emerged as the unchallenged leader of the Nazi movement.

Hitler was now able to turn his attention to the creation of a Nazi state. Labor unions were abolished, strikes were forbidden, and special courts were established to arbitrate labor-management disputes. Economic development plans and programs were immediately initiated and public works projects on a massive scale commenced to solve the problem of unemployment. In less than three years these plans bore fruit: unemployment declined from over si. million in 1932 to less than a million in 1936: salaries and fringe benefits for workers increased: and the average German worker enjoyed a standard of prosperity unknown since the depression. Whatever their political views no one could deny that the Nazis had engineered the economic recoveiA of their country. ,As a result, many thinking Germans joined the Nazi bandwagon, and by 1936 Nazism had become a genuine mass movement.