The successful conclusion of the Marianas campaign opened the way for MacArthur to return to the Philippines. The only unsettled question was whether the thrust through the Philippines should be part of the major eflfort to subdue Japan or given second priority. For once, all major commanders in the Pacific theatre were in agreement; MacArthur was joined by Admiral Halsey and other senior naval officers who argued against a diversion of Allied eflTorts to China or Formosa. The campaign in the Philippines was quickly given top priority.

MacArthur’s plans were already made when the Joint Chiefs gave their official blessing to the venture; all that remained to be done was to co-ordinate with the Navy and fix a date and place for the invasion. MacArthur and his associates had originally considered Mindanao the most likely target of an Allied attack on the islands of Leyte and Luzon. Morotai, Peleliu, and Ulithi, with their bases and refueling stations had to be captured first, however. The scheme was submitted to the Joint Chiefs in late August and was immediately approved.

By mid-September Morotai and Ulithi were in Allied hands, but Peleliu there was tough fighting and heavy resistance. Although the major landing target, an air field, was secured on 12 October, the island was not cleared until the middle of Nov'ember. Nev’ertheless, MacArthur would not be deflected from his primary goal; re-occupation of the Philippines. Preparations 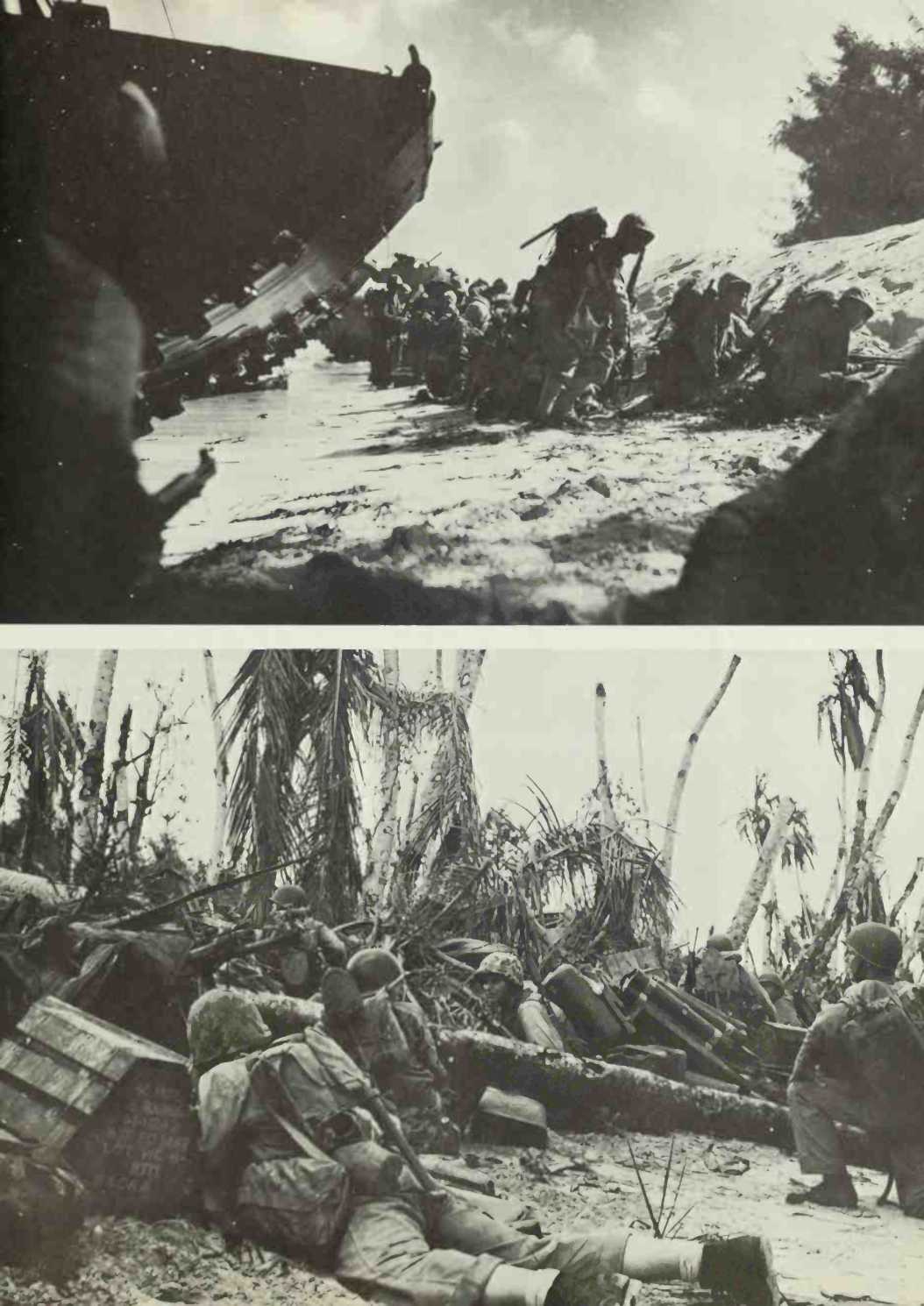 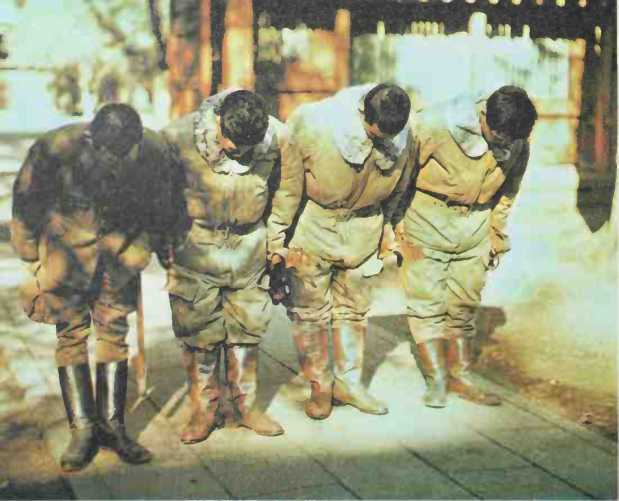 Above: Homage to the Emperor before certain death. Right: Kamikaze attacks on American ships caused considerable damage Center right: One or two direct hits by Japanese suicide planes could put an aircraft carrier out of commission. Bottom right USS Franklin lists badly after having received a direct hit. 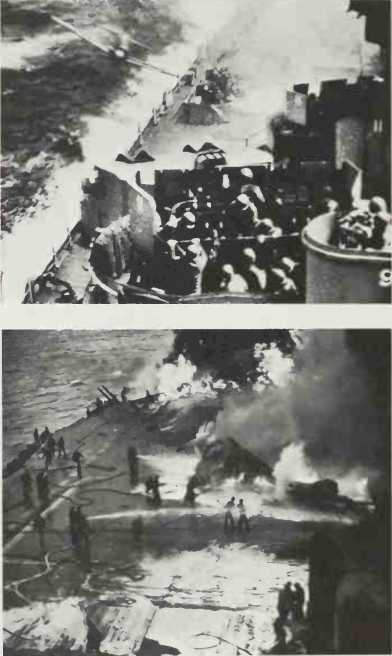 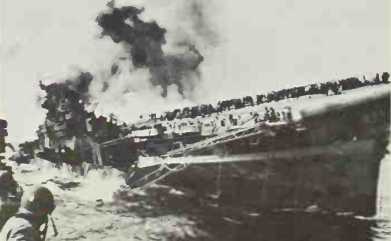 For the invasion of the Philippines went on without interruption, and the Allies were ready by mid-October.

On 20 October 1944 America returned to the Philippines when units of the United States Sixth Army were landed in Leyte. The Japanese responded by sending what was left of their Combined Fleet to stop them. Four days after the Leyte landing the two sides met in the final major naval engagement of the Pacific war, the Battle of Leyte Gulf.

The Japanese diided their fleet, sending one group north through the Surignao Strait to Leyte Gulf, and another south from San Bernadino. If all went according to plan, the two halves of the fleet would converge upon the American task force in the gulf and suicide pilots. Kamikazes, would destroy American troop ships and their escorts. Surprise was essential, but on 23 October Admiral Kurita's Center Task Force was spotted by American submarines as it was moving south through the Palawan Passage Strait. Vhen Kurita reached the Sibuyan Sea the following morning. Admiral Mitscher was waiting. American aircraft sunk a battleship, the Musashi, three cruisers, and several smaller ships, and he was forced to withdraw. Japan’s Southern Force fared little better.

On 25 October ships of the United States Seventh Fleet opened fire on the Southern Task Force as it tried to move from the Strait of Surigao into Leyte Gulf. The Seventh Fleet was deployed in a fifteen-mile line blocking the entrance into the Gulf, and the Japanese could reach it only by steaming through the American line. This they declined to do, although Admiral Mishimura made a more concerted effort to breach the line than did his partner. Admiral Shima. The Japanese lost several destroyers in the contest but managed to withdraw from the battle area with no additional losses.

Encouraged by the withdrawal of the Center Task Force, Admiral Halsey was an. xious to pursue the retreating Japanese to find and attack Admiral Ozawa’s decoy fleet which had been sent south from the Japanese Islands to draw the Americans away from the Philippines. With Kurita in retreat and the Seventh Fleet engaging the Southern Task Force, Halsey felt it was safe to leave the escort carriers of the Seventh Fleet near the San Bernadino Straits while his Third Fleet sought out Ozawa’s task force. This proved to be a great mistake; no sooner had Halsey’s task force left Leyte Gulf than Kurita appeared with his fleet. By the time Halsey got word of this, he was 150 miles north of the area and could have done little to rescue the fleet carriers even if he had thought such a mission possible, which he did not.

Although Kurita’s reappearance was alarming, Halsey had overestimated the damage done to the Japanese armada in the contest off the Palawan Passage on the 24th, and did not think it presented any danger wTich American naval forces in the Gulf of Leyte could not handle. Unfortunately he was mistaken. When Kurita appeared in front of the carriers of the Se enth Fleet on 25 October, he had four battleships, a half dozen heay cruisers, and several destroyers under his command, while the Americans could

Muster onK six carriers and their destroyer escorts. Bn the end of the day one.meri( an carrier and two destroyers had been laid to rest. But at least the carrier fleet was not annihilated, so the incident was not an unmitigated disaster for the.mericans.

While.dmiral Sprague battled Kurita’s task force, Halses found and engaged. Admiral O/.awa’s fleet ioo miles northeast of Luzon. Here the •mericans more than made up for their losses further south; planes from Americait carriers flew hundreds of sorties and when the battle w;ls oser, four Japanese carriers lay at the bott(jm (jf the Pacific. Had Halsey not bel. itedly sent a small task forte under Admiral I. ee to the rc*scue (jI the .Seventh l leet carriers in Leyte (»ulf, Ozawa’s forte would have been completely decimated. Nevertheless, the Japanese sustained heavy losses m the Battle ot (>a|>e Lugano whit h, at this stage t)f the w. ir, they t ould ill aflortl. 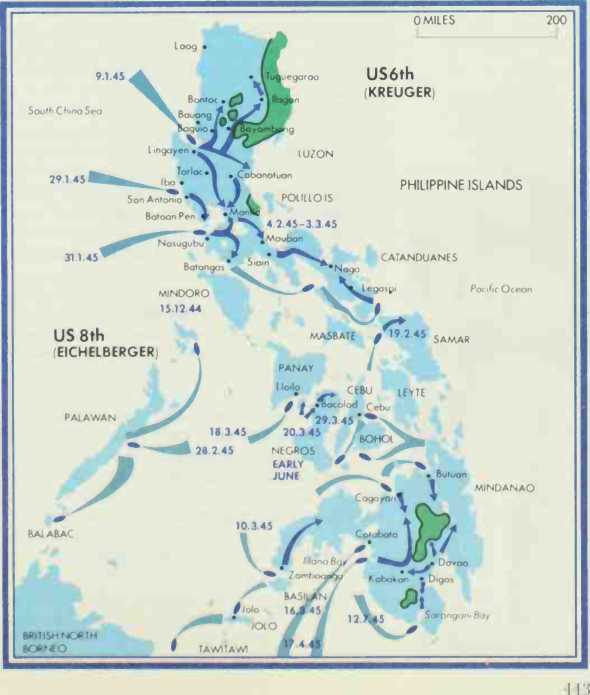 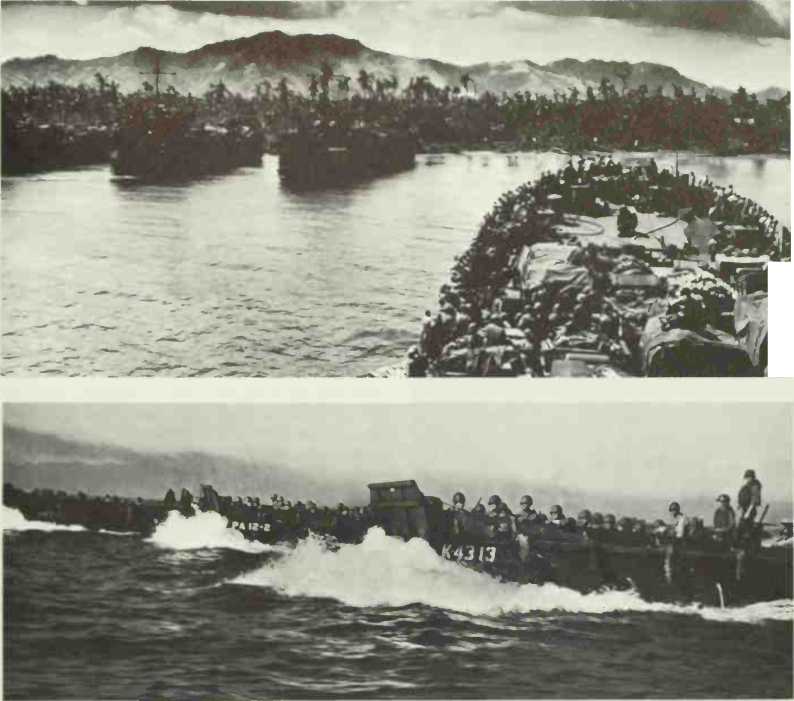 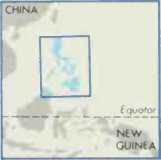 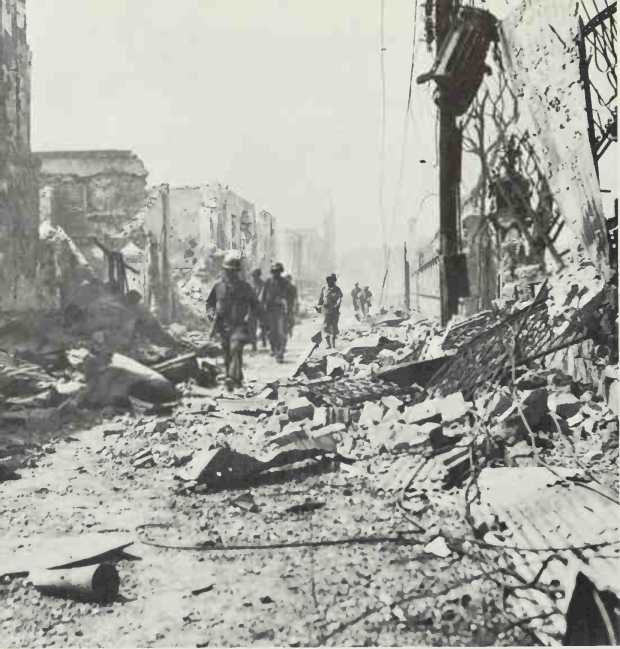 American troops move into the devastated Intramuros section of Manila.


MacArthur reads the proclamation of the liberation of Levte.

Soon after the initial landings on Leyte, the Americans encountered additional obstacles. Rain-soaked roads proved unable to bear the weight of heavy armored vehicles which quickly bogged down in the mud, and airfields proved unusable for much the same reason. While the landing force was stuck in this mire, the Japanese were able to reinforce their garrison on the island; by the middle of December 45,000 men had been put ashore.

MacArthur and Halsey had intended using Leyte as a major site for air bases from which Japanese installations elsewhere in the Philippine Islands could be attacked, but this plan had to be modified. Carriers of the United States Third Fleet were ordered to stations in the Gulf of Leyte so that these attacks could be launched using carrier-based as opposed to land-based aircraft. This posed two problems which had not been originally anticipated. First, the carriers were themselves targets for Japanese kamikaze squadrons, and second, carrier-based aircraft were necessarily smaller than land based bombers, carried smaller payloads and were less effective.

There was no way to protect against kamikaze attacks. Suicide pilots, sealed into their aircraft, and determined to crash their planes which were loaded with bombs into Allied ships, presented a threat hitherto unheard of in modern warfare. The Third Fleet suffered the loss of two carriers and several other ships before Halsey ordered part of it to withdraw to the Caroline Islands at the end of November. By that time, however, things were going better on Leyte and the Americans considered plans for the invasion of Luzon.

Leyte was finally secured on 25 December 1944, although the Japanese continued to resist the Americans in i. solated pockets until the following spring. While the mopping-up progressed on Leyte, the major action of the Philippine campaign, the invasion of Luzon, began. On 9 January American forces landed in the Lingayen Gulf.

Although the landing of the Sixth Army at Lingayen was easily accomplished. General Yamashita, the commanding general of Japanese forces in the Philippines, could not permit the landing party to proceed inland without contest. Japanese forces were deployed in front of the landing sites to resist the four American divisions put ashore during the first day of the Allied offensive, but the effort failed. While I Corps of the Sixth Army pushed the Japanese into the mountains of the Gulf, other units raced south toward Clark Field and Manila.

The Sixth Army encountered heavy opposition as it pushed toward Manila. to the establishment of air fields on Mindoro the Allied were able to check the effectiveness of Japanese air power over Luzon, but the going on the ground was extremely tough. The distance between the landing sites on the Lingayen Gulf and Manila was only 110 miles, but it took over a month to cover. True to their tradition, the Japanese fought bravely and often to the last man; since there were about 170,000 Japanese on Luzon, General Krueger’s advance was necessarily slow.

As Krueger’s forces pushed toward Manila, MacArthur prepared to seal the escape route through the Bataan Peninsula by landing a second Allied force close to that area on 29january. A third force was airlifted and dropped 40 miles south of Manila on 31 January. Together, the three groups proceeded toward Manila, converging on the city, at the beginning of February by which time General Yamashita had abandoned it. Although Japanese army forces had been withdrawn to the mountains, the Manila was still defended by units of the Japanese Navy under the command of Admiral Iwabachi, who refused to obey Yamashita’s order declaring Manila an open city and continued to resist the Americans for another month. With several thousand men under his command, Iwabachi turned the battle for Manila into a house to house confrontation, resulting in great damage to the city during the final stage of the campaign. By 4 March, when the city was finally cleared, much of it had been destroyed.

The capture of Manila marked the end of Japanese control in the Philippine Islands. Within weeks, the Bataan Peninsula was cleared and Corregidor was retaken. By the beginning of April Allied shipping was using the port of Manila again, and military leaders were considering their next move against Japan. Although isolated pockets ofjapanese resistance were not eliminated until August 1945, shortly before the war’s end, they presented no clear or present danger to the American position in the Philippines. MacArthur had returned.