But in the jungles and villages of steaming South hetnam, the Communists needed another decisive victory, another Dien Bien Phu, to put an end to American determination to remain in the war. At three o'clock in the morning of the first day of the 'ietnamese Xew Year, Tet, 31 January 1968, the American Embassy in Saigon was invaded by 'iet Cong. In those early morning hours almost e ery important American base was under attack by the National Liberation Front, the South

’ietnamese Communists. Eleven XLF battalions entered Saigon, while simultaneously around the country some 84,000 troops moved on major cities and bases.

The AR’N and the Americans were taken completely by surprise, and while the Communists tried to seize the South and destroy the American sense of security in the cities, measures to counterattack were launched. At the same time North  ietnamese forces crossed the so-called demilitarized zone at the 17th Parallel and pushed south to the US Marine outpost at Khe Sanh. The American militarv reckoned that Khe Sanh 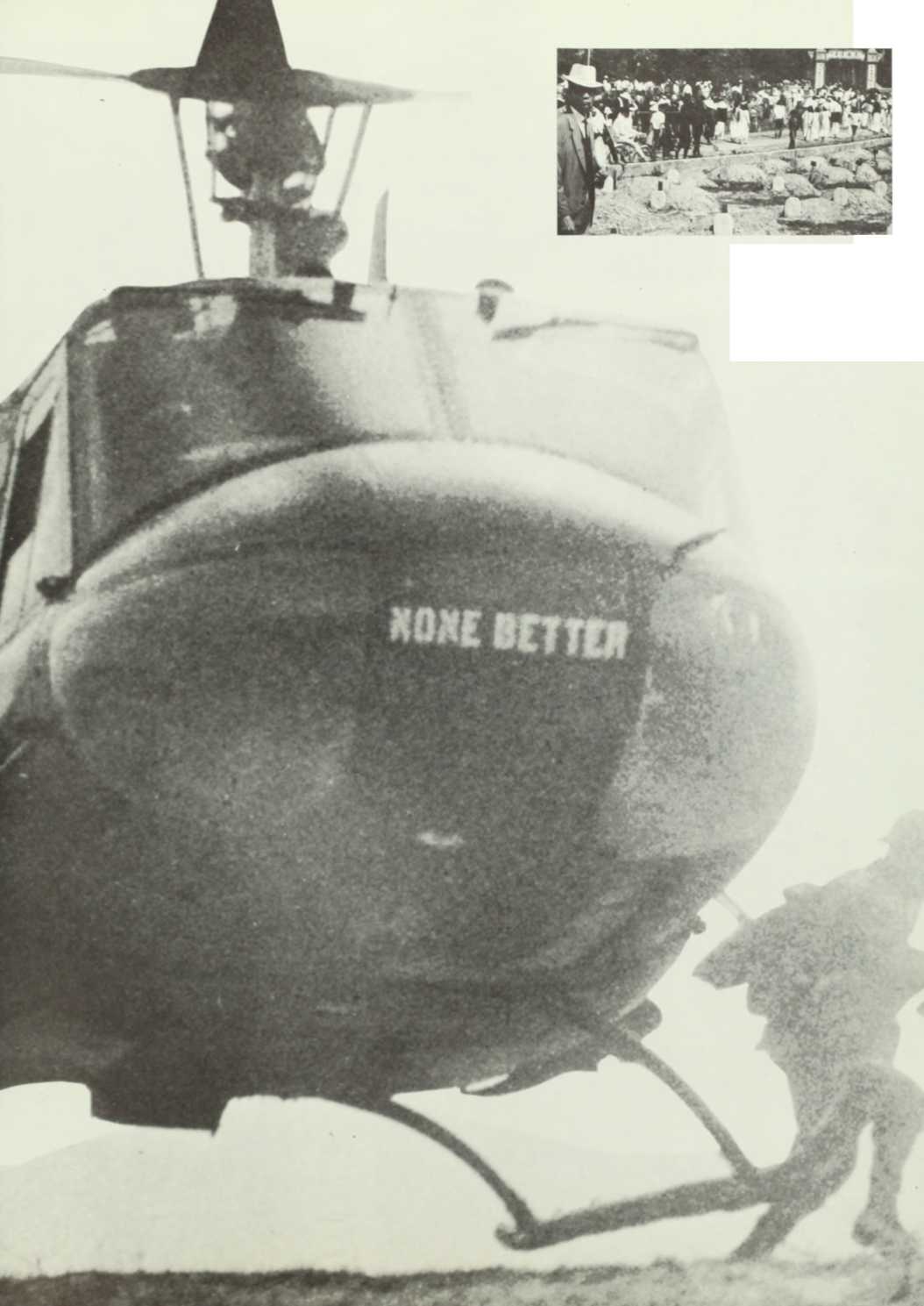 Above: Headstones of some of the victims of the Tet Ofl'ensive in tgGS Below: Infantrymen leap from a L’H-iD helicopter during an assault from their base camp in the highlands.


Right: A minesweeper from ilic 4th Infantry Di ision on Higliway 19 during the American withdrawal in 1970. Far right: Men of the 25th Infantry Division return to fire support base Jamie in 1970. These bases helped to cover the American withdrawal. Below right: Members of the Peoples Self-Defense Force learn how to defend their hamlet as part of the X’ietnamization policy. Below: The reality of a search and destroy operation: heat, mud. water and danger.

Opposite above: An M-42 twin 40 mm. self-propelled automatic weapon protects the An Lao X'alley. Opposite below: Deforestation of the X’ietnamese jungle was an ill-concei ed plan. With the tops of the trees burned off, it was thought that the ’iet Cong could be more easily spotted. Actually new undergrowth quickly sprouted up w hich pro ided e en more efiective cover for the 'iet Cong. 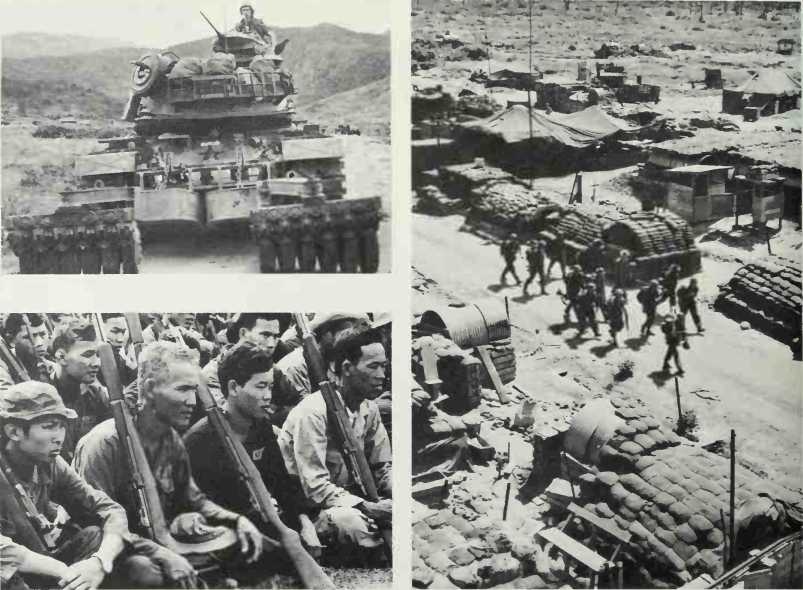 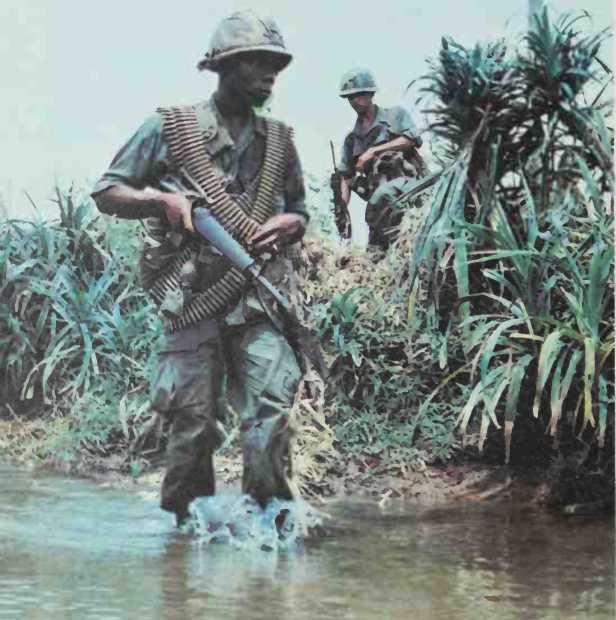 Would be their Dien Bien Phu and reinforced it, while the North 'ietnamese simply went past the coastal town and moved into Hue, the old imperial capital. Like a wounded animal, the US and AR’N forces responded with a ferocity not yet experienced in the war. American planes strafed and bombed large population centers indiscriminately, destroying whole cities like Kontum City, My Tho and Ben Tre. Hue suffered the worst of all, the beautiful city on the Perfume River reduced to rubble as US Marines fought for weeks to drive out the Viet Cong. Communist forces were soon pushed out of Saigon and other major centers, but the fight for Hue riveted American public attention to Vietnam as never before in the war. Civilian dead in the Tet Offensive numbered 165,000; two million more refugees streamed into the ruined cities. By March Hue was also cleared and the results of Tet became clear to both sides. As a military venture, a go-for-broke gesture to win the war at a stroke, the Communist offensive was a dismal failure. Their best units destroyed, their carefully hoarded supplies near exhaustion, the fiet Cong and NLF were in no position to mount another offensive for years. But as a political gesture, the Tet attack was a stunning success.

President Johnson’s credibility reached new lows at the moment when he planned to launch his re-election campaign. Although the US had ironically won a great victory over Communist forces, the US had been humiliated. Pressure to step down as President mounted in the country as anti-war demonstrations continued. In a primary election in New Hampshire, Senator Eugene McCarthy, ananti-war Democrat, did surprisingly well, and the popular brother of President Kennedy, Robert Kennedy, belatedly announced his intention to run for the Democratic nomination 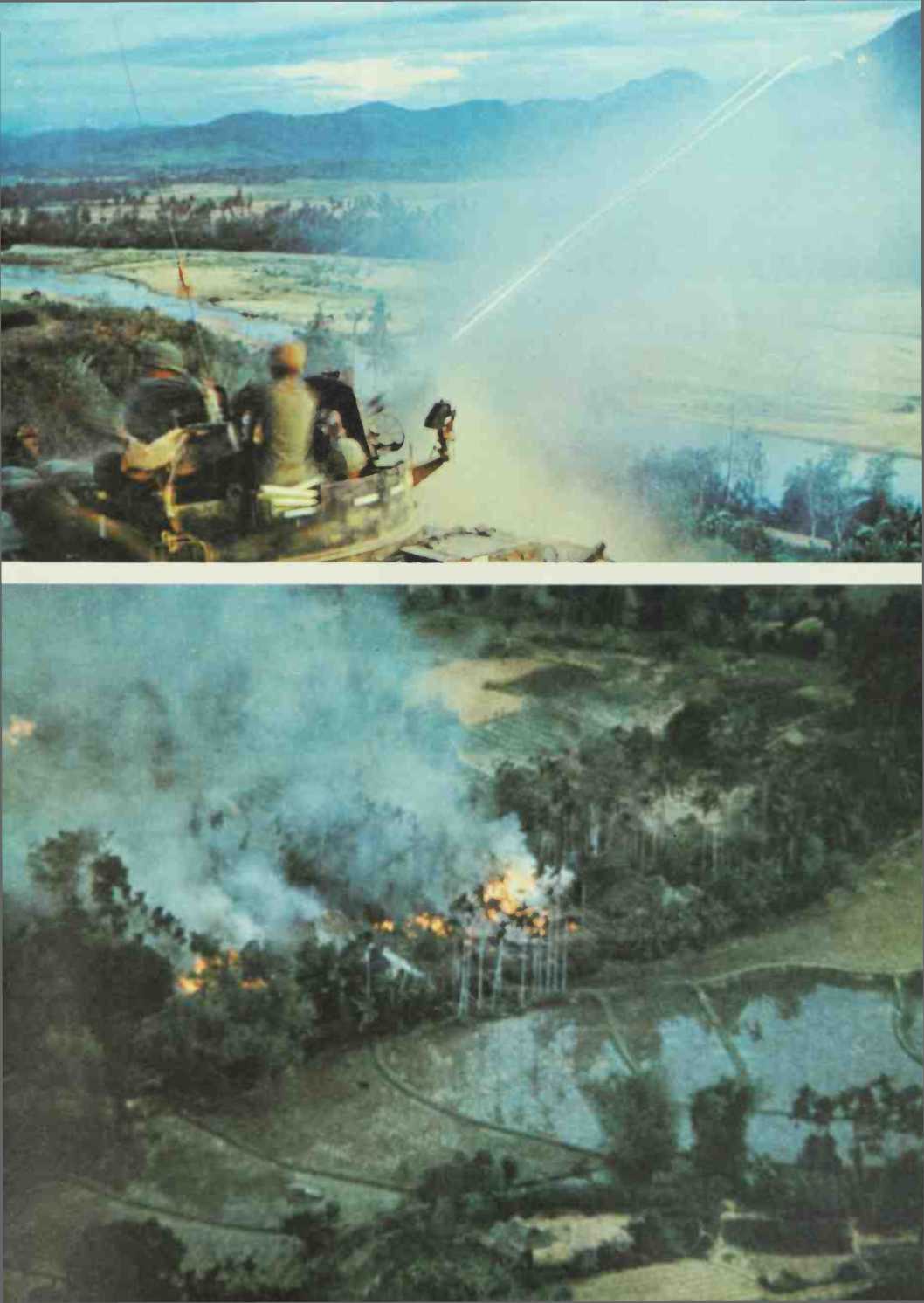 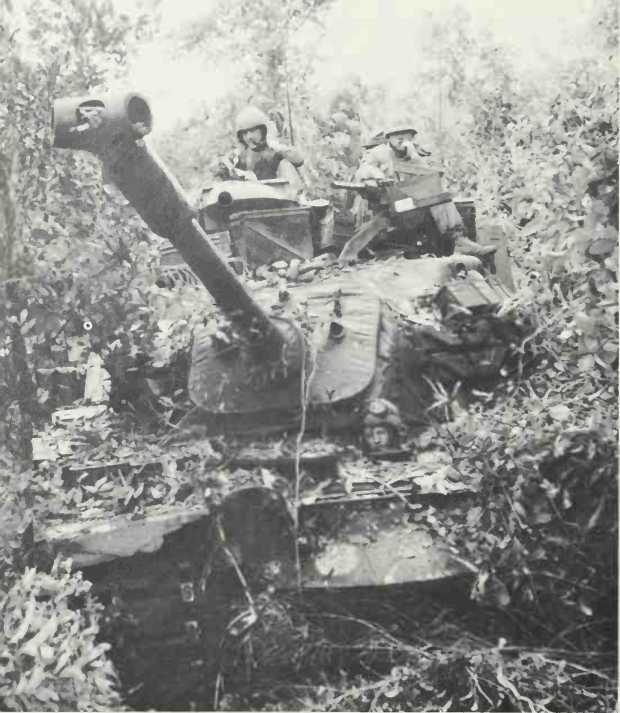 An M-48 tank patrols an area near Highway 19 in the An Khe area.

USS Everett F. Larson blasts the ’ietnamese coast from two of her 5-inch.38 caliber guns. The US destroyer armada provided support to a South ’ieinamese force operating near the DMZ. Opposite:

-American forces leave Quang Tri. south of the DMZ, in 1972.


For President against Johnson. On 10 March Westmoreland informed Johnson that he would need 206,000 more men in "ietnam, when the American presence already stood at over half a million. Johnson was then told that America would be forced to devalue the dollar if a further escalation were contemplated.

On 31 March Johnson decided not to run again. He knew he was beaten, not so much on the battle-held as politically. No candidate could run and hope to win on the promise of four more years of war. The public, disillusioned with Democratic war policies for the past eight years and shattered by the assassinations of Martin Luther King, the black leader, and Robert Kennedy, turned reluctantly to the familiar Richard Nixon, Eisenhower’s ’ice-President and candidate for President in i960. Rioting by blacks, anti-war riots and the usual political demonstrations common to an American election year vied for headlines, as US and ARVN forces tightened their grip in South hetnam. For the hrst time in memory the Communists were on the defensive, just at the moment when America lost its will to hght.