Preparation for the invasion

Having failed to deter the Fuehrer from invading Russia, it became the unhajipy lot of the General Staff to pre|iare plans for such an imasion; the assignment was given to General Faulus in October lyp'. .Although details of German operations in the So iet Union were to be worked out by the general, the f uehrer insisted on thiec things, first, the Wehrmacht was to destroy Russian Ibices in the western part ol the. Soiet Ibiion. Second, following its success, (Jerrnan armies were to push eastward, establishing a defensie line stretching from. Archangt'l to the ’olga to provide territorial insurance against a Russian comiteraltack. d’hird. preparations for the invasion were to be made in a manner that would not excite Soviet suspiciotis. This dictated the most discreet mnement ofmen and munitions as well as close cooperation with the Foreign .Ministr, which was to maintain the fa< ade ol dflnUe while militai) |uejiaiations were (oin-pleted.

. outline for the attack on the. So iet Union w. is re ach at the end of.oember, tested in a series ol war games, and |)resented to Hitler on December. 1 he |dan called for a threc’-pronged attack aimed at captuiing produc tion centers in the - Ukiaine. the DoncU/ basin, and the - c itic-s ol 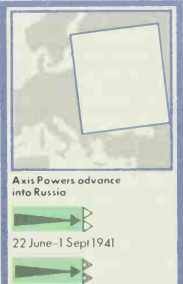 
Leningrad and Moscow. By dividing their forces and sweeping rapidly into European Russia, the Germans would overcome the Red Army before adequate defenses could be prepared. Since the number of men available for the invasion was small compared to the resources of the Red Army, speed and surprise were essential if the Soviets were to be overwhelmed before they could mobilize. Quality would make up for quantity. AVhat the Wehrmacht lacked in numbers would be more than compensated for in the efficient and fast execution of the plan. By such daring action Germany would win her greatest victory of the war, taking hundreds of thousands of prisoners, and capturing Russia’s agricultural and industrial resources intact. If all went well, a German victory would be a fait accompli by December 1941. Hitler, needless to say, was excited by the prospect of presiding over the dismemberment of the Soviet L’nion and quickly gave his approval to the plan prepared by Paulus and the General Staff, ordering all necessary preparations to commence on 18 December 1940. It was now up to the diplomats to do their part while the preparations were completed. This was no simple task.

Soviet leaders were not blind to the possibility of a German attack but preferred, for the time being, to preserve the Nazi-Soviet pact, for Russia needed time to prepare for war; while the diplomats dallied, Russian factories could continue to produce guns, tanks, and planes. Since it was unlikely that Hitler would strike before the successful conclusion of the Battle of Britain, there was no reason not to respond to German diplomatic feelers. When Molotov was invited to Berlin in November 1940, Stalin was only too happy to accept the invitation. Little did he realize that his willingness to extend the dkente with Germany played right into Hitler’s hands.

AVhile men and munitions were readied for the invasion of Russia, Soviet diplomats were lulled into thinking that Hitler wished to preserve the status quo with Stalin. German-Russian discussions were pursued in an atmosphere of ‘mutual trust and mutual understanding’ while the Wehrmacht was preparing for war. Diplomats might gloat over the atmosphere of the summit but it was the German military which had won a victory in this matter. Never had deception been more brilliantly practiced.

A new German-Russian treaty was signed on 10 January 1941 embodying the results of the Berlin negotiations, and to the world, and many in Germany, all seemed well between Hitler and Stalin. Nothing could have been further from the truth; convinced that Stalin did not expect the Germans to attack Russia, Hitler reached the point of no return on the invasion of Russia.