The Allies enter the war in China

At'first the creatimi of the China-Burma-India theater and the designation r>f Chiang Kai-shek as the commander ol Allied force's in China solved few problems and actually created additional headaches for the Chinese and their.merican allies, from the beginning in January I9f2, the two sides pursued contradictory courses which resulted in hostility, recriminations, and a leg. icy of bitterness and frustration. Fhe Chinese w ished

China to be the major theater of w'ar against Japan, while the United States and Great Britain had other ideas, seeing China only as a holding action, a second priority sideshow. To complicate matters further, personalities in the CBI clashed een more than policies, contributing to the near collapse of the alliance. Nowhere was this more clearly illustrated than in the relationship between Chiang, the commander of Allied forces in China, and his lieutenant and chief-of-staff. General Joseph Stilwell, United States Army.

General Stilwell was despatched to China on 5 January 1942, charged with the command of .American forces in the CBI and the reorganization of Chinese forces. one-time military' attache in Peking and fluent in Chinese, General Stilwell could hae been an effectise liaison between China and the United States. Although his superiors knew that he was not a diplomat, they hoped that his knowledge of China and the Chinese might enable him to rally dissident political factions and increase the capability and efficiency of the Chinese army. Unfortunately, this was not to be the case.

His experience in China had made Stilwell distrustful of the leadership of the Kuomintang, and he insisted that Chiang gie him carle blanche as his chief-of-stafi' to reorganize Chinese forces. This the Generalissimo refused to do for, although he appreciated the need for a strong, effectise army, he feared the political repercussions that a reorganization w'as likely to yield. Above all, Chiang wished to preserse his command intact and hold his forces in reserve for the postwar battle with the Chinc. se communists which he believed was inevitable. Thus it w'as necessaiy to negate Stilwcll’s schemes, particularly the reorganization of the army and its commitment in a second Burma compaign.

Had it not been for the presence of another. American officer in China, General Claire Chennault, Chiang might hae been forced to accommodate his chief of staff. Chennault, how - eer, provided him with an altcrnatise by his very presence and strong advocacy of an aerial strategy, which required little commitment of Chinese manpower and promised fast and cheap results. Fhe Chennault plan, needless to say, was far more attractise than. Stifivell's projjosals; more important (fhennault, who shared the Generalissimo’s dislike of Stilwell, was successful in winning Chiang’s personal approval.

Fhe substance of Chennault’s proposal, which was advanced by Chiatig to President Rooseselt 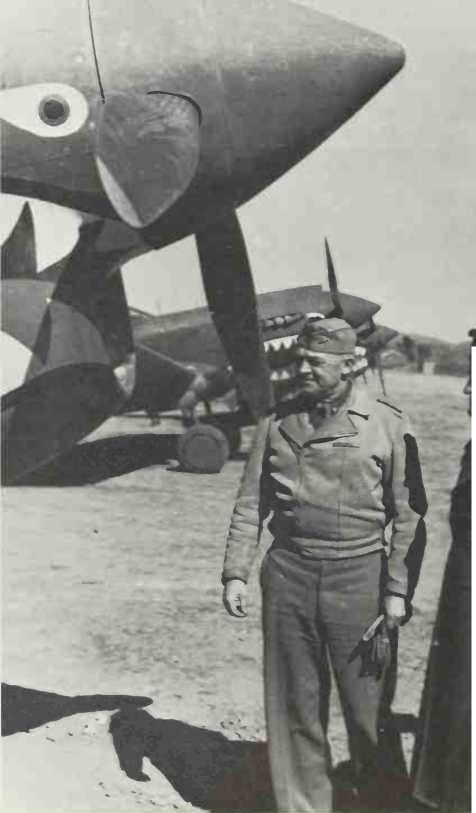 Later in the war, was outlined in a series of memoranda from Chennault to Stilwell in the fall of 1942. Shortly after assuming command of the China Air Task Force, on 16 September, Chennault submitted a statement outlining his views on the potential of China-based air power. His objectives for the CATF were sLxfold: i to protect the air supply route over the Hump; 2 to destroy Japanese aircraft in China in large numbers; (3 to damage and destroy Japanese militar- and naval bases in China and encourage Chinese resistance; 4 to disrupt Japanese shipping along the Yangtze and Yellow rivers and the China coast: 5 to damage Japanese bases in

Thailand, Indochina, Burma, and Formosa and to interest Japanese air concentrations being ferried from Chinese bases across Indochina and Thailand to Burma; 6 to destroy the efficacy and morale of the Japanese air force by destroying rear depots and aircraft production facihries in Japan. To accomplish these ends, Chennault requested additional aircraft, operational independence, and an increased share of supplies flown over the Hump.