A History of Eastern Europe 1740-1918: Empires, Nations and Modernisation 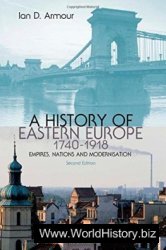 A History of Eastern Europe 1740-1918: Empires, Nations and Modernisation provides a comprehensive, authoritative account of the region during a troubled period that finished with the First World War. Ian Armour focuses on the three major themes that have defined Eastern Europe in the modern period - empire, nationhood and modernisation - whilst chronologically tracing the emergence of Eastern Europe as a distinct concept and place. Detailed coverage is given to the Habsburg, Ottoman, German and Russian Empires that struggled for dominance during this time.
In this exciting new edition, Ian Armour incorporates findings from new research into the nature and origins of nationalism and the attempts of supranational states to generate dynastic loyalties as well as concepts of empire. Armour's insightful guide to early Eastern Europe considers the important figures and governments, analyses the significant events and discusses the socio-economic and cultural developments that are crucial to a rounded understanding of the region in that era.
Features of this new edition include:
- A fully updated and enlarged bibliography and notes
- Eight useful maps
- Updated content throughout the text
A History of Eastern Europe 1740-1918 is the ideal textbook for students studying Eastern European history.