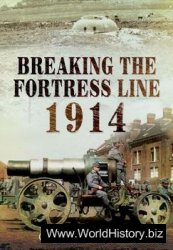 Breaking the Fortress Line 1914 offers a fascinating new perspective on the German offensive against France and Belgium in 1914. In graphic detail it describes the intense fighting that took place around the forts and fortified cities that stood in the path of the German invasion. The ordeal began with the German assault on the mighty fortress of Liège. They took twelve days to batter their way through the ‘Gateway to Belgium’, losing tens of thousands of men in repeated frontal assaults, and they had to bring up the heaviest siege artillery ever used to destroy the defenses.